In the parking garage of the California Tennis Club in San Francisco, Tom Steyer opens the door of his Chevy Volt. The tiny hybrid vehicle is not a typical choice for a billionaire, but Steyer is an environmentalist who has spent vast sums to raise awareness about climate change. So the sandy-haired 60-year-old folds himself into the cramped backseat as an aide takes the wheel for the 30-mile drive to a speaking engagement in the town of Concord. Next to him is an anthology of Mary Oliver’s poems. As the car takes off, I ask if he knows that lovely line “Tell me, what is it you plan to do/ with your one wild and precious life?” Steyer smiles. “I believe I’ve used that statement a few hundred times,” he says.

What Steyer plans to do with his wild, precious life–and his abundant resources–has become a matter of heated speculation. A few days before our car ride in mid-January, the man who is often styled as a liberal counterweight to the Koch brothers announced that he will spend $30 million this year through his super PAC, NextGen America, to help the Democrats win back the House. That’s on top of his campaign for President Trump’s impeachment, on which he’s dropped $20 million, despite some objections from his own party. “I’m super-ambitious about having an impact, and unabashedly so,” says Steyer, who topped lists of America’s biggest donors in the past few election cycles. “And I think we’re making up a way to do that.”

Read more: ‘This Guy Is Cracking Up.’ Billionaire Tom Steyer on His Crusade to Impeach Donald Trump

Steyer has flirted with running for office, leading some to wonder if he’s also using such projects to build a candidate’s résumé. Chris Lehane, a longtime political adviser and friend who runs Airbnb’s policy shop, says Steyer gave some thought to running for Senator Dianne Feinstein’s seat in 2018 after the California Democrat said that Trump “can be a good President.” That is not a belief Steyer shares. But the prolific donor says he will do whatever has “the biggest impact,” and has concluded that funding grassroots activism is the most useful thing he can do for the progressive cause. At least for now.

To date, the only elected office Steyer has ever run for was student-body president at his prestigious East Coast boarding school. It was the mid-1970s and Phillips Exeter Academy had recently gone co-ed, so Steyer campaigned in support of parietals, or the right of boys and girls to visit each other in their rooms. (Not surprisingly, the platform got him elected.) From there, Steyer went on to several other elite institutions–Yale, Stanford, Goldman Sachs–before founding a hedge fund that turned millions into billions in San Francisco, where he now lives in a home that overlooks the Golden Gate Bridge.

When Steyer entered the political arena in earnest about five years ago, he focused on making climate change a central issue for Democrats. Despite heavy spending, his super PAC–then called NextGen Climate–had a mixed record. That may be why, when Trump apparently caught wind of the impeachment campaign, he tweeted that Steyer was “wacky & totally unhinged” and “never wins elections!”

In ads for Steyer’s “Need to Impeach” effort, he argues straight to the camera that the President’s actions–like firing FBI Director James Comey and stoking nuclear conflict with North Korea–make him a danger to the American people. The fact that Steyer chose to be the face of the campaign is one reason people like Thad Kousser, a political science professor at the University of California, San Diego, think he is in the midst of a “soft launch” for a 2020 presidential run. When asked about such aspirations, Steyer just laughs and says that a lot could happen between now and November: “There are so many different ways this world could look.”

If he chose to run, Steyer would likely be dogged by the notion that billionaires are out of touch and the fact that he made money off coal-related projects before becoming a climate-change crusader. “Do I wish I had figured it out sooner?” he says in the back of the Volt, with an ice pack nursing a knee injury from his college soccer days. “Of course I do.”

He would also have a ready-made mailing list: so far, about 4.4 million people have signed on to his impeachment campaign. Earlier in the day, some of those individuals had volunteered to help deliver copies of Fire and Fury–Michael Wolff’s explosive book about Trump’s first months in the White House–to every member of Congress. Staff reported to Steyer on that project and others during debriefs at the buzzing NextGen office. The meetings were more gregarious than methodical; Steyer peppered staff with questions as he ate a sandwich wrapped in lettuce rather than bread. The boss seemed avuncular and boyish, easy to laugh and apt to joke, nibbling his nails and shifting in his chair. (One Democratic operative said comparisons to the Kochs are unfair, because the conservative megadonors run a more sophisticated operation.)

While Democrats have applauded Steyer’s plan to get out the vote in the midterms, some also consider his impeachment crusade to be distracting–a delicate way of saying politically unsound. They worry it may serve to divide the left and mobilize Republican voters who find it overreaching. If that’s true, Steyer’s efforts could work against each other as the NextGen staff races to register left-leaning millennials in swing states across the country. But for Steyer, that seems beside the point: he has a conviction and feels a moral responsibility to act on it, whatever the polling indicates. “This is not a normal guy. This is not a normal circumstance,” he says of Trump. “Anyone who is treating it that way is missing the point.”

As the Volt nears Concord, Steyer opens a binder to review the speech he will give to a room full of activists, about how immigrants are under attack despite being the “threads” that hold the American fabric together. It’s a political message and a personal one. The aide who is driving the car is a so-called Dreamer from El Salvador–one of the roughly 800,000 people who were brought to the country illegally as children and recently found themselves at the center of a congressional debate that briefly shut down the federal government. He’s also an occasional workout partner for Steyer and helps the boss practice his Spanish on trips.

As he begins to read, Steyer takes a pen and draws five crosses on his left hand, a big one in the center and then a smaller one in each quadrant. Lehane says Steyer began a “radical evolution” in his thinking when the financial crisis hit a decade ago. He became more religious, thought more about his role in the world and began morphing into a man who spends his days considering the intersection between global warming and social justice. The doodle looks like a Jerusalem cross, a symbol associated with spreading the gospel. Steyer says it reminds him “to try and tell the truth.” It also serves as a representation of his family: his wife the big cross, with their four children around her.

Inside a low-ceilinged ballroom, Steyer delivers what feels like a simulacrum of a campaign speech to a receptive crowd. “The triumph that we have is not where we started,” Steyer says, “but the progress toward justice we have made since we started.” As he finishes and the crowd files out, one attendee turns to another by the door. “I don’t know about you,” the man says, “but that speech sounded pretty presidential to me.” 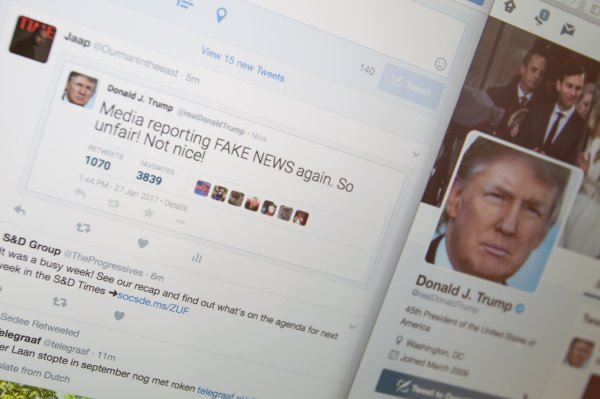 Here Are the 10 Donald Trump Tweets Americans Hate the Most
Next Up: Editor's Pick