The One Where All the Candidates Are Friends

Former US Secretary of Housing and Urban Development Julian Castro, US Senator from New Jersey Cory Booker and US Senator from Massachusetts Elizabeth Warren laugh during a break in the first Democratic primary debate of the 2020 presidential campaign season in Miami, Florida, June 26, 2019.
JIM WATSON--AFP/Getty Images
By Charlotte Alter

Joe Biden is the one most likely to say, “How you doing?” Bernie Sanders and Elizabeth Warren are the ones in an uncertain relationship with a breakup on the horizon. Marianne Williamson is the one who is definitely Phoebe.

For a bunch of sharp-elbowed politicians competing for the presidential nomination, many of the 2020 Democratic candidates seem to be acting like they’re actually friends. Cory Booker once led a “Julián!” chant at a Nevada Starbucks in support of his rival Julián Castro, according to a Castro aide. Before she dropped out of the race last month, Kirsten Gillibrand would rush to hug her old friend Booker backstage at candidate forums, a former Gillibrand aide recalls. After the first Democratic primary debate, Elizabeth Warren texted Castro that he’d done a great job.

Even though candidates are running out of time to separate themselves from competitors, the relative lack of rancor is striking. Maybe it’s that campaigns sense the Democratic base is wary of intraparty bickering after the acrimonious 2016 primary. Maybe they’re trying to compete for future endorsements or jobs. But staffers for five 2020 Democrats insist that after years of serving together in the Senate or working together in Democratic politics, many of the presidential contenders just genuinely like each other.

Whether it’s real warmth or clever branding, most of the 2020 candidates have been acting more like frenemies than political nemeses. Warren and Kamala Harris shared a hug at the Iowa State Fair. Castro tweeted birthday wishes to Booker on “the big 5-0,” and voiced his support for Pete Buttigieg’s decision to return to South Bend, Ind., in the aftermath of a police shooting. When Donald Trump Jr. shared a post suggesting that Harris—the daughter of a Jamaican father and Indian mother—wasn’t black enough to be discussing issues facing African Americans, rivals leapt to her defense, with Booker tweeting that she “doesn’t have shit to prove.” Amy Klobuchar and Buttigieg both tweeted good-natured photos of themselves sitting in adjacent rows on a United flight. When a video of two toddlers racing to hug each other went viral this week, Castro’s communications director tweeted the video and captioned it “@JulianCastro and @CoryBooker seeing each other at a candidate forum.”

“Running for President is physically and mentally taxing and strenuous, and when you see people you’re friendly with out on the road, you’re experiencing the same thing,” says a top aide to Gillibrand. “It’s people being normal people, like ‘Hey, there’s someone who I like who is also doing this crazy thing!'”

Some of the friendly vibe is born of years of collaboration in the Senate. Booker has co-sponsored 38 pieces of Harris’s legislation, more than any other Senator. Warren and Senator Bernie Sanders have been progressive allies for years. Harris, Klobuchar and Warren all attend a quarterly bipartisan dinner for women Senators. Last year, Warren and Harris appeared in a video together explaining the student debt crisis.

While the contest between Sanders and Hillary Clinton grew bitter in 2016, it’s not unusual for rivals in a competitive primary to play nice, at least for a while. In 2012, Ron Paul formed a tacit strategic alliance with Mitt Romney. (Paul’s penchant for attacking critics of GOP front-runner Mitt Romney led one Romney ally to dub Paul the eventual nominee’s “deputy campaign manager.”) In 2016, Ted Cruz heaped praise on Donald Trump for months, hoping to scoop up Trump’s supporters when his candidacy eventually imploded. When it didn’t, Cruz became Trump’s fiercest critic.

And not all the 2020 Democratic candidates get a friendship bracelet so far. A series of candidates, including Harris and Booker, have taken aim at front-runner Joe Biden; most recently, Tim Ryan suggested Biden was “declining” mentally. At the second Democratic debate, Tulsi Gabbard attacked Harris for her record as a prosecutor.

But the question of friendliness (or lack of it) could help define the two candidates vying for second place behind Biden. One of the primary differences between Sanders and Warren—who are competing for progressive voters but have maintained something of a non-aggression pact to date—is how they interact with their peers.

Sanders, an iconoclast and Independent, has a reputation as a solo artist. Warren is positioning herself as more of a team player. “Warren in particular has been keen to give credit where credit is due,” says Sawyer Hackett, press secretary for Castro, noting her support for Castro’s immigration policy and Governor Jay Inslee’s climate program. “It’s refreshing for any candidate to get earnest praise from one of their competitors for putting together a strong policy.” Sanders has long been critical of the Democratic Party, and has slammed what he called its “corporate wing.” Warren, who started off the second Democratic debate by shaking hands with each of her rivals as they entered the stage, has made a point of mostly refusing to criticize Democratic opponents. When asked to draw a distinction between her campaign and Joe Biden’s, she said “I’m not here to diss any other Democrat.”

All the chumminess is unlikely to last. It could all end as soon as Thursday, when the top 10 contenders all debate together for the first time in Houston. But for now, the candidates seem to be dancing to the tune of an iconic sitcom theme song: “I’ll be there for you… cause you’re there for me, too.”

The original version of this story misstated Sawyer Hackett’s role within the Castro campaign. He is the press secretary, not the communications director. 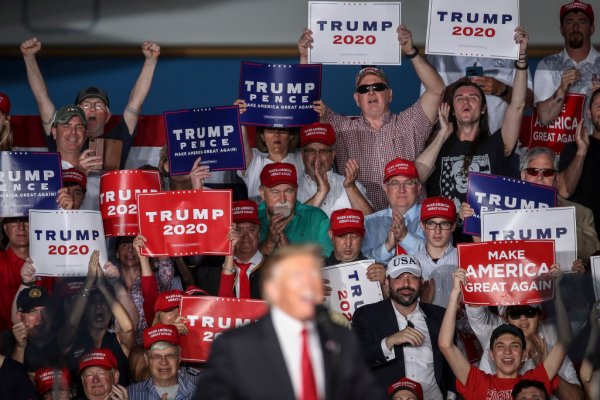 Trump's New Math: Inside the Plan to Flip Blue States in 2020
Next Up: Editor's Pick