The Real History Behind the Downton Abbey Movie

Over the course of its six seasons on television, the show Downton Abbey offered fans a high dose of drama — and a chance to learn about the real history of the English aristocracy in the early 20th century. From royal scandals to technological advances, Downton often drew on the truth to create the world its characters inhabited.

Now Downton Abbey is back (sort of), with a big-screen version that continues the story. It’s set in 1927, and revolves around King George V and Queen Mary and their daughter Mary, the Princess Royal, staying with the Crawley family at Downton in Yorkshire.

While the story is a work of fiction, the creators once again turned to the past for inspiration. Here’s a guide to the real history behind the biggest plot points.

The Royal Visit to Downton

There is a long history of British monarchs popping in for a visit at aristocratic families’ country homes. In the 16th century, Elizabeth I would make the rounds in the countryside on tours known as the royal progress. These visits became less frequent over time, as they were very expensive to pull off, but they didn’t disappear entirely. For example, Edward VII, who was known for having a wandering eye, stayed at prominent English countryside homes during his reign from 1901-1910. “If Edward VII was coming to your house for a weekend house party, you had to make darn sure you invited his current mistress,” Adrian Tinniswood, author of The Long Weekend: Life in the English Country House Between the Wars, tells TIME.

The royals featured in Downton Abbey—King George V, who reigned 1910-1936, and his wife, Queen Mary—enjoyed the custom, as the King loved to go hunting. The biggest haul was on Dec. 18, 1913, when the King and his hunting party shot 3,937 pheasants, three partridges, four rabbits and one unknown animal classified as “other,” according to Tinniswood’s book.

Experts tell TIME that the monarchs’ household staff probably wouldn’t totally replace the household staff of home owners, but a handful of the staff would likely come along. Queen Mary would usually travel with a footman, a page, two dressers, two chauffeurs, one lady-in-waiting, a maid for her lady-in-waiting and a detective.

The royals would also have several very specific requests. To stay at Holker Hall in Lancashire country, Queen Mary brought her own sheets and pillow cases, but expected her hosts to provide a chair placed outside her bedroom (for her page to sit on), “fresh barley water placed in her bedroom at two-hour intervals during the day” and six clean towels every day, according to Tinniswood’s book.

The royal visit depicted in the film, however, may be a composite of different visits, rather than taking inspiration solely from one specific example.

Queen Mary and King George V (both in the center) are flanked by the Mayor of Rotherham Alderman P Bancroft Coward (far right) and his wife during their July 8-12, 1912, visit.
Wentworth Woodhouse Preservation Trust

Downton Abbey creator Julian Fellowes has said the royal visit in the film is partly based on King George and Queen Mary’s July 1912 visit to Wentworth Woodhouse, one of the largest estates in Europe; in the Downton Abbey film, the scene of the ball is shot there. According to the historian of the South Yorkshire estate, David Allott, highlights of the five-day visit included tea at Conisborough Castle, tours of local businesses and watching ballerina Anna Pavlova at Wentworth Woodhouse’s Marble Saloon as after-dinner entertainment. However, the trip was overshadowed by an explosion at the nearby Cadeby Main Colliery coal mine that killed nearly 100 people on the second day of the planned visit. The monarchs shifted gears and went to comfort the injured at the site. The town was so grateful that crowds flocked to Wentworth Woodhouse on the evening of July 11, waving torches as a choir sang patriotic songs.

But Alastair Bruce—a historical advisor to the film, the Governor General of Edinburgh Castle and a descendant of Robert the Bruce—said he had his own family history in mind when offering counsel to the filmmakers: King George V and Queen Mary visited the Bruce family in 1923 at Broomhall House, the home of his great uncle, Edward Bruce, who was then the 10th Earl of Elgin. The archives at Broomhall provided key resources for shaping his advice for the Downton Abbey showrunners about how such large establishments were run.

The 1922 marriage of George V’s only daughter, the Princess Royal, Mary, to Viscount Henry Lascelles, later the Sixth Earl of Harewood, was the first royal wedding to be covered in Vogue. The magazine described Mary as “a fairy Princess with Youth, Beauty and Happiness as her attendants.” Lascelles was considered especially desirable as he had inherited a fortune of £2,500,000 (about $270 million today) from his great-uncle, the Marquess of Clanricarde.

And yet, the film depicts Mary thinking about leaving Viscount Lascelles.

That’s based on something real, too: Princess Mary was known for being warm, and was much beloved — especially for sending World War I troops care packages filled with tobacco, a pipe, cigarettes and a lighter in a brass box with a picture of her face. But Lascelles had a very different reputation. Though their son George Lascelles remembered him in a memoir as a great father, there have long been rumors that he married Mary to win a bet. Liz Trubridge, one of the Downton Abbey producers, says the filmmakers were working off longtime rumors that Lascelles suffered from shell shock as a result of serving during World War I. In addition, the age difference could have in theory made things difficult; Lascelles was 15 years older than his wife.

“It’s always been passed down by word of mouth that he’s difficult, and the general line was that he was old brute,” says Hugo Vickers, who edited the recently re-released biography The Quest for Queen Mary by James Pope-Hennessy. “But it’s hard to find evidence. Some people called him cold and hard; Princess Mary, she would never ever have considered doing anything out of line.”

Exactly how they got along is hard to tell, but just as they stay together in the movie, they stayed together in real life. The Princess Royal had a “terribly shy” side, and spent most of her time in Yorkshire, especially at Harewood House, where several scenes in the Downton Abbey movie were shot. The Princess Royal died at Harewood House in 1965.

The new, shady character Captain Chetwode (Stephen Campbell Moore) latches onto Tom Branson (Allen Leech), whom he sees as a fellow Irish Republican with a bit of a rebellious streak — and access to the King.

In reality, there were definitely tensions between Ireland and the crown, but the worst violence took place before the period in which the Downton movie is set.

Irish demands for independence for Britain led to the Anglo-Irish War from 1919-1921, which resulted in a treaty that recognized an independent government called the Irish Free State that would still be part of the British Dominion. The 1920 Government of Ireland Act partitioned six counties and allowed them to remain a part of the United Kingdom — becoming what’s now known as Northern Ireland. Irish nationalists who wanted to fight for a fully independent republic catapulted the Irish Free State into a civil war in the early 1920s. The conflict “destroyed the economy, so for the rest of the ’20s, they were still trying to recover from that,” says Kevin Matthews, historian and author of Fatal Influence: The Impact of Ireland on British Politics, 1920-1925. “By 1927, most of Ireland had moved on to other problems.” The Republic of Ireland wouldn’t be established until 1949.

Plus, George V was not known for playing an active role in Irish affairs. The assassination-attempt idea might have been slightly more plausible, says Matthews, if it involved a British politician more involved in Irish politics, such as Prime Minister Stanley Baldwin or Winston Churchill, who was the war minister during the Anglo-Irish War and was involved in the partition issue.

Chetwode’s rebellious spirit is partly inspired by someone real, according to Trubridge: Roger Casement. King George V knighted Casement in 1911 for exposing the abuse at Belgium’s rubber plantations in the Congo, but he later got involved in the Irish nationalist movement and was hanged for treason in 1916, well before the Downton Abbey film takes place.

The State of Downton

Beyond the royal fuss, the Downton movie returns to a central question of the original television show: how a place like Downton Abbey might fit into the modern era. As Mary Crawley (Michelle Dockery) asks Violet Crawley, the Dowager Countess of Grantham (Maggie Smith), in the film, “Are we right to keep it all going, when the world it was built for is fading with every day that passes?”

Though Downton Abbey isn’t a real place, that matter is very real, and there were several reasons for the shift.

At that time, there was indeed more class consciousness in the U.K. The working classes were growing increasingly vocal, and the 1926 General Strike in Britain was an example of that. After working in modern factories during World War I, many women stuck to those kinds of jobs instead of going back to household staff roles.

“These houses were designed to be served by an army of cheap labor and certainly by 1930, there’s a problem in getting domestic staff for a house,” says Tinniswood.

Aristocrats’ estates like Downton were being heavily taxed, and inheritance tax was high too, so these houses were becoming more expensive to operate by 1927, and even harder in the ’30s when the Depression hit. Many homes that couldn’t be maintained were demolished; some estimates say more than 1,000 were demolished in the 20th century.

Today, the modern-day analogues of the Crawleys have evolved to keep up with the times. “The aristocracy in this country does keep going, but they all have to open their houses now and have to have attractions—concerts, education departments, Churchill speaking competitions,” as Vickers puts it.

In fact, Highclere Castle, the real estate featured in the Downton Abbey TV series and film, is no exception: it has been inundated with visitors, and is now even on Airbnb.

The original version of this story misstated the name of the man who was hanged for treason in 1916. It was Roger Casement, not Robert Casement. 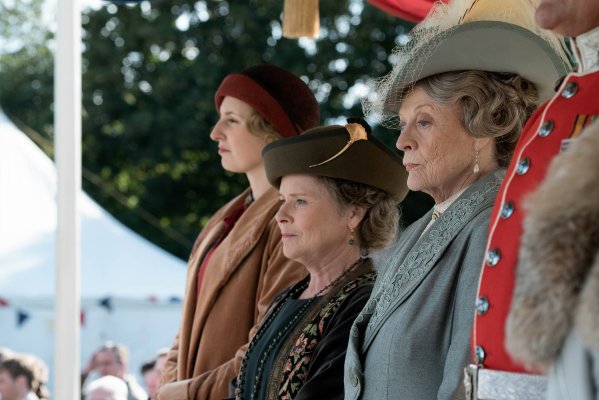 Old Friendships, New Costumes and Timeless Royal Fever on the Set of the Downton Abbey Movie
Next Up: Editor's Pick