Downton Abbey’s drama is driven by the relationship between the downstairs world of the scrappy servants and the aristocratic family upstairs. But how has the real-life version of that dynamic evolved over the past century? Kevin Johnson—a former footman at the British Embassy in Paris, a past employee of modern aristocrats and current owner of the Green Baize Door, an upscale British staffing agency—weighs in.

Have the customs and standards that audiences see on Downton Abbey continued to this day?

Yes. In fact, I would go as far as to say that with modern gadgetry and equipment, some households now strive to deliver even higher levels of service. From silver polishes and electronic gadgetry to floor-polishing machines and clothes steamers, technology has helped immeasurably. Every department—Kitchen, Food and Beverage Service, Housekeeping and Garden—is reaching new heights. This is especially true on yachts, where there is a clear intention to elevate the level of service to an art form.

Why yachts in particular?

It’s an enigma. They’re not houses, so one might think the level of service would be lower than in a home, but it’s become a game for the crew to outshine their client’s friends or competitors.

Stewardesses service cabins and bathrooms every time a guest uses a space, changing the D. Porthault linen sheets three times a day if necessary. Deckhands will be up at 4:30 a.m. to scrub down everything in sight so that it’s gleaming when the client wakes up for breakfast, while chefs will have everything available all of the time. That means that provisioning will often have no budget—and certain ingredients will be flown in on the client’s private jet. One of my previous employers instructed his pilot to hide a whole leg of Parma ham and several Sicilian air-dried sausages by sitting on them while the aircraft was inspected by US customs. That’s how important it was to have the finest ham available on his yacht!

Back in the ’20s and ’30s, lower-class children were sent into great houses to be hall boys and kitchen maids and worked their way up. How does it work now?

Palaces and embassies play their part in training staff, but grand hotels and Michelin-starred restaurants are also responsible for providing the industry with new recruits. And people still start as bellhops or kitchen porters. I know of one gentleman, Raja, a Jordanian with no formal education, who started work in a Five-Star hotel in Amman as a bellboy. Twenty years later, after a lot of hard work and a hell of a lot of determination—mixed with infectious enthusiasm for his job—he is now a palace manager in Saudi Arabia.

Obviously, a butler on an estate in the 1920s and 1930s would often have his job for life. Is there more turn-around now than there was back in the day?

Yes. It is unusual for staff to stay beyond 10 years, but it must also be remembered that few if any employers in the U.K. willingly provide pensions, so while some employers complain that staff do not stay in their positions as they used to, staff are now forced to consider other jobs.

How realistic is Downton Abbey in its depiction of these relationships?

I would argue that they’re way too informal and not entirely based on what happened in British households in that period. While elements of the story line are quite factual, it makes me chuckle to see the lady of the house in the kitchen with the chef talking about menus, or gossiping with her maid as she prepares for dinner—if only because these things don’t happen today, so they certainly would not have happened in the 1920s or earlier.

The Downton Abbey phenomenon has made the wealthy in places like China strive to adopt the customs shown in the show. Is the show influencing British society, as well?

Certainly there are now many people working in service, and there are no shortage of families wanting to hire professional domestic staff—but in London that probably has to do with the sheer number of wealthy people arriving in the capital to set up new homes, and almost nothing to do with Downtown Abbey.

Is it harder to find qualified staff now?

How does that work?

It’s a bit like marriage. All the parties need to trust, like and respect each other! For me, mutual respect is particularly important, and if that respect breaks down irreparably, then its time to move on.

The LIFE commemorative edition Downton Abbey: Behind the Scenes of the Iconic TV Show is available in stores now. 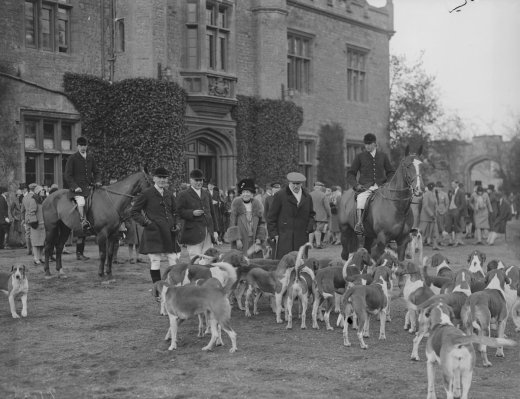 What That Fox-Hunting Scene on <i>Downton Abbey</i> Says About The Final Season
Next Up: Editor's Pick