The True Story Behind Outlaw King: What to Know About Scottish Independence Hero Robert the Bruce

Increasing anxiety about the U.K.’s preparations for leaving the European Union has some Scots talking about how, in a world of Brexit, they might be able to actually pull off independence.

And whenever talk of Scottish independence ramps up — not infrequently; a referendum on the topic failed in 2014 — people look for lessons in the story of the legendary king who led Scotland to independence in the 14th century: Robert I, also known as Robert the Bruce (Bruce being his family name). So it’s perhaps fitting that, amid the ongoing political turmoil, a dramatization of his story is in theaters and becomes available for streaming on Netflix on Friday. Outlaw King stars Chris Pine (and, yes, all of Chris Pine) and is based on a pivotal period in Scottish history.

The film begins with the English siege of the Scots’ Stirling Castle in 1304, as a Warwolf — a huge medieval trebuchet — lobs boulders at the stronghold, in a motion similar to “an overarm pitch,” explains one of the film’s historical advisors Tony Pollard, Professor of Conflict History & Archaeology at the University of Glasgow (who also served as historical advisor to the TV series Outlander). At that time, most of Scotland’s castles were already occupied by English garrisons, and the King of England, Edward I, was flexing his power as overlord of Scotland and demanding the Scottish elites give him their fealty.

A succession crisis in Scotland had empowered Edward I. There were no heirs to the Scottish throne left after the death of the King of Scots Alexander III in 1286, so the Scottish nobility put together a committee of guardians to keep the government running. After the death of the Queen of Scots Margaret, Maid of Norway, in 1290, the guardians asked Edward I to come serve as an independent arbitrator to evaluate claims to the Scottish throne. As a result, John Balliol became King of Scotland in 1292.

But his reign didn’t last long. After Balliol sought an alliance with France, England’s enemy back then, Edward I himself came back to invade Scotland and drive out Balliol in 1296.

Now the independent kingdom of Scotland was facing direct rule by the English crown. Hard up for cash after the invasion, having “stretched his resources to a breaking point,” Edward I tried to shake down the Scots — including seizing their wool, the country’s main export at the time, according to Dauvit Broun, a professor of Scottish History at the University of Glasgow, who wasn’t involved in the film.

That’s when Robert the Bruce decided that enough was enough. He declared himself King of Scotland.

But in order to rule, Robert had to eliminate the competition. Scottish nobles who backed Balliol had been keeping a government going in his name. To be king, Robert the Bruce would have to get rid of anyone who challenged his own claim to the crown. So in February of 1306 at the church of Greyfriars in Dumfries, Robert the Bruce met with John “The Red” Comyn, one of the most powerful nobles in Scotland, who had been spearheading the effort to establish a Balliol kingship. Comyn didn’t walk away from the meeting alive.

There’s debate about whether Robert the Bruce killed Comyn himself or whether accomplices did, but he’s thought to have been in on it — and in the film, he’s depicted as murdering John “The Red” Comyn himself, which is what many people think happened. Robert the Bruce and his wife Elizabeth de Burgh were inaugurated King and Queen of Scots at Scone shortly after. Not a lot is known about de Burgh, and later in the year she was taken prisoner in England.

But, though the murder of John Comyn secured his power in one way, it also made Robert the Bruce — who by then called himself King Robert I — a toxic figure in Scottish society. Soon enough, he was forced to flee.

“The most powerful nobles of Scotland treat him as a terrorist,” says Broun. “Not only is Robert I trying to establish an independent Scotland, but [also] he’s facing a civil war.”

In June of 1306, he struggled to keep up with the English army in the Battle of Methven, depicted in the film. “He’s basically an outlaw and the English are trying to bring him to book,” says Pollard. “[Robert the Bruce] comes close to being captured and beaten.”

His time as a fugitive is a mystery to historians.

“Nobody knows where he went when he was fugitive, but it looks like he thought hard about strategy,” says Broun. “He stayed out of a battle until he knew he’d have a better chance of winning, and that was controversial because kings were meant to be military heroes. He resolved that every castle he took he would destroy because he reckoned that, for the King of England to win, he would need to garrison Scotland, and you can’t do that unless you’ve got castles. It’s a bit like taking a bomb and destroying Buckingham Palace. But Robert I took the view that if he was going to win, it was only going to be because he had the support of the people, so he didn’t need castles.”

The film aims to depict Robert I’s military genius by highlighting the guerrilla tactics he used to overthrow the superior military force that was Edward I’s English army. One aspect of that involved creating what Pollard calls a “human porcupine” of sorts, with hundreds of men in one big group holding nearly 20-foot-long spears straight out in front of them.

The Scots also had a home turf advantage in terms of navigating the boggy, marshy battlegrounds. “Bruce deliberately picks land where the strength of the English Army can’t be brought into play,” says Pollard. “The English are knights in armor on horses, and Scots were men on foot, who didn’t have much in the way of cavalry.”

Robert’s first victory as king came in May of 1307 at the Battle of Loudoun Hill, close to his longtime family stronghold of Carrick (now part of Ayrshire).

“It’s significant because it means that he’s no longer just a fugitive,” says Broun. “But he’s still only someone who controls a small region of Scotland, his home region, which is not very different from being a noble — except he claims to be king.”

So the most famous and most important battle in Robert the Bruce’s career came even later, after the period of time covered by the film.

It was the Battle of Bannockburn, in June of 1314 that really paved the way for Scottish independence. Edward I had actually died shortly after the battle of Loudoun Hill, but at Bannockburn, Robert I defeated his successor Edward II.

“The Battle of Bannockburn is really the conclusion of the civil war,” says Broun,”[and] shows everyone who isn’t an inveterate opponent of Robert I that he’s in charge, that he can defeat the King of England. The few nobles who are still swithering say, ‘Okay, the reality is Robert I is in charge.'”

Elizabeth de Burgh is said to have been returned to Robert I after the battle as part of a prisoner exchange. Scotland’s independence from England would be official until the two nations signed the Treaty of Edinburgh in March of 1328. Robert I died the following year but Scotland would remain independent until James VI of Scotland inherited the kingdom of England after the death of Elizabeth I in 1603 and became James I of England. Oliver Cromwell conquered Scotland completely in 1650, and the Scottish and English parliaments merged in May of 1707.

And yet Robert the Bruce’s reputation as a national hero endured.

“He was reduced to being a fugitive and yet managed to restore Scotland as a fully-functioning independent kingdom. This makes his achievement even more remarkable,” Broun says. “He had to improvise constantly and had to work really hard to be king, as opposed to being born into it and not having to struggle for it.” 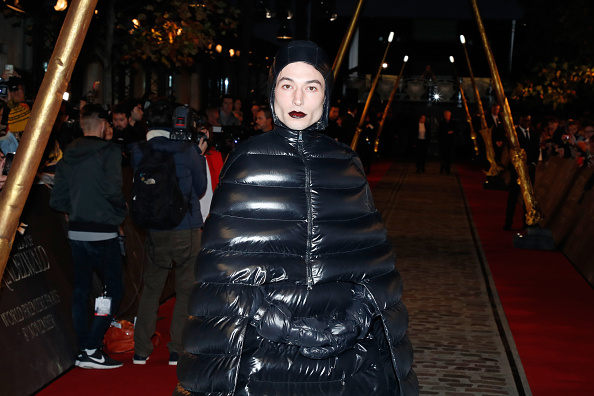 A Fantastic Beasts Actor's Extravagant Fashion Statement Has Cast a Spell Over Everyone
Next Up: Editor's Pick