Texas Lawmaker to Beto O'Rourke: 'My AR Is Ready for You'

A Republican lawmaker in Texas is in the spotlight after tweeting a threatening message to Democratic presidential candidate Beto O’Rourke following Thursday night’s Democratic debate.

Cain’s message came after O’Rourke pledged during the debate to take away weapons “designed to kill people on a battlefield.” He singled out the AK-47 and the AR-15, a weapon used by a number of recent mass shooters. O’Rourke has made gun control a major part of his platform after recent mass shootings in the Texas communities of El Paso, Odessa and Midland.

“In Odessa, I met the mother of a 15-year-old girl who was shot by an AR-15, and that mother watched her bleed to death over the course of an hour because so many other people were shot by that AR-15 in Odessa and Midland, there weren’t enough ambulances to get to them in time,” O’Rourke said during the debate. “Hell, yes, we’re going to take your AR-15, your AK-47. We’re not going to allow it to be used against our fellow Americans anymore.”

O’Rourke, a former Texas congressman, responded to Cain’s message shortly after it was posted, calling it a “death threat.” Cain’s original tweet was removed by Twitter for violating the service’s rules.

Others on Twitter also accused Cain of making a violent threat against O’Rourke.

Briscoe has not backed down from the criticism, calling one person an idiot for saying that he threatened a presidential candidate. Cain also called O’Rourke “a child.” 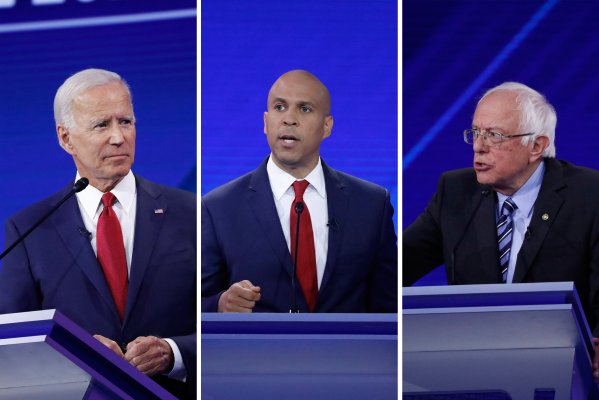 The Facts Behind the Democratic Candidates' Claims
Next Up: Editor's Pick