7 Things We Learned From the Third Democratic Debate

For the first time in the 2020 Democratic primary, the top 10 candidates took the stage together Thursday night in Houston for a debate that focused on issues ranging from healthcare to gun violence to foreign policy.

Here are seven of the top takeaways:

1. There wasn’t much debating at the third Democratic debate.

Thursday night’s debate often sounded more like a series of mini-stump speeches. Even as the field narrowed to the 10 top contenders, the 2020 Democrats largely declined to actually debate each other. On everything from education to immigration, they contrasted their positions not with their competitors onstage but rather with Trump, or with Obama, or with whomever they believed had caused the status quo. When they did engage one another, it was often to offer compliments. (Several praised former Texas Representative Beto O’Rourke’s handling of the El Paso mass shooting.) Almost every time the moderators set up a fight, the candidates refused to punch.

Staying relentlessly on message instead of attacking rivals could be smart strategy for a Democratic primary electorate that is clearly wary of the intraparty bickering that marred the 2016 primary. The 2020 race has been friendly so far, and many candidates seem determined to avoid political combat at this stage. Playing nice for now could win crucial endorsements as the field winnows, while dramatic confrontations in previous debates—such as Senator Kamala Harris’s attack on former Vice President Joe Biden’s busing record—have offered temporary polling spikes but did little to change the contours of the race.

While avoiding conflict may have been smart strategy, it meant that Thursday’s debate didn’t do much to change the race. Viewers wanted drama; this was a musical revue.—Charlotte Alter

2. There were few fireworks between the top three candidates.

The first face-off between Biden, Massachusetts Senator Elizabeth Warren and Vermont Senator Bernie Sanders brought fewer direct clashes between the members of the race’s top tier than many expected. The first question, to polling leader Biden, was whether he thought Warren and Sanders were pushing policies that were “too far beyond where Democrats want to go and where the country needs to go.” Biden dodged, saying that’s up to the voters. For her part, Warren didn’t make any efforts to ding Biden, maintaining her consistent position of keeping her fire trained on Trump. And Sanders, too, kept his barbs tame, only in passing bringing up cancer coverage; Biden’s son, Beau, lost his battle with the disease.

Biden, for his part, was a little more willing to engage. When asked about the Medicare for All proposal backed by Warren and Sanders as an alternative to Obamacare, Biden had the answer ready: “The senator says she’s for Bernie. Well, I’m for Barack [Obama].” Biden repeatedly pressed for answers on cost from Warren and Sanders, who have an unofficial non-aggression pact between them. And when talk turned to union-negotiated insurance plans that are more generous than Medicare and why workers would sacrifice benefits, Biden questioned Sanders’ assertion that workers would have their pay raised in exchange. “For a socialist, you’ve got a lot more confidence in corporate America than I do,” Biden snarked.— Philip Elliott

3. Castro took the most shots at the front-runner.

Former Housing and Urban Development Secretary Julián Castro was the most aggressive candidate on stage, consistently going after Biden. “I’m fulfilling the legacy of Barack Obama, and you’re not,” Castro said. (“That’ll be a surprise to him,” Biden shot back.) In a line of attack borrowed from Senator Cory Booker, Castro argued the Vice President liked to take credit anytime “something good about Barack Obama comes up,” but refused to defend the parts of the President’s record that have grown unpopular with the Democratic base.

Most notably, Castro alluded to Biden’s age by suggesting he was suffering memory loss. In an exchange over health care, Castro asked if the Vice President had forgotten “what you said just two minutes ago.” Castro was arguing the Vice President had contradicted himself by saying that a person who qualified for Medicaid would have to buy in to his health care plan. The attack was a misfire—Biden had earlier said that “anyone who can’t afford it gets automatically enrolled in the Medicare-type option we have”—but it’s an open question how it will play with debate viewers.—Lissandra Villa

4. If you listen closely, the Democrats sound a lot like President Trump when it comes to trade tensions with China.

The Democratic candidates were quick to condemn Trump’s erratic approach to U.S.-China trade relations. “He conducts trade policy by tweet, frankly born out of his fragile ego,” Harris said, in a characteristic broadside.

But while they slammed his tactics, the Democrats did not offer a sharp alternative to Trump’s policy. All the candidates were asked Thursday night said they would not immediately remove the tariffs on hundreds of billions of dollars of Chinese goods imposed by Trump. And all of them took a hard line on the country that was — until earlier this year — the U.S.’s largest trading partner. “They’re stealing our intellectual property,” Biden said, echoing the Trump administration’s line.

One notable distinction between Trump’s position on U.S.-China trade relations and that of the Democrats was the role of U.S. allies. Trump has opened up trade battles not only with China but also with the European Union, Mexico and Canada. Booker said he wanted to rally American allies to “beat China,” while Biden suggested similar. “We make up 25 percent of the world economy. We need another 25 percent to join us,” he said.—Justin Worland

The candidates spent the first 40 minutes of the debate as they often have this cycle: criticizing each other over the details of health care plans that mainly hope to achieve similar goals through different means. Nearly the same discussion was seen at both of the first two sets of debates this summer, with little new information or even fresh arguments introduced on Thursday night. While health care is a topic that everyone knows voters care deeply about, the candidates don’t seem to have figured out how to talk about it in a way that distinguishes one plan from the next.

Warren and Sanders still support Sanders’ Medicare for All plan, while Harris has pivoted to her own version of what she calls “Medicare for All,” which would include private insurers. Mayor Pete Buttigieg says he wants to let voters choose to buy into a Medicare-like plan that he calls “Medicare for all who want it,” and O’Rourke calls his public-option idea “Medicare for America.” Biden, for his part, bills his plan as aiming to “protect and build on the Affordable Care Act,” though on Thursday, after hearing O’Rourke speak, he remarked: “You just described my plan.” Got all that?

The 10 Democrats on stage agreed that universal healthcare is the ideal goal, and that Americans should not go bankrupt trying to afford care. But as they rehashed their ideas, it became clear that the candidates’ tactic of using very-similar-but-slightly-different terminology to try to distinguish themselves was not doing them many favors.—Abigail Abrams

6. Harris came prepared to defend her record as a prosecutor.

In the second Democratic debate in Detroit, Hawaii Representative Tulsi Gabbard came armed with an attack on the former California Attorney General’s career as a prosecutor. Gabbard wasn’t on stage this time, but Harris faced more questions about her record. Moderator Linsey Davis noted that some of the Senator’s positions in her recently released criminal justice plan, including her support for marijuana legalization, marked a shift from policies she had implemented as a prosecutor.

Harris was ready with a response. She explained how participating in the civil-rights movement as a child led her to become a prosecutor. “I made a decision that if I was going to reform the system, I was going to do it from the inside,” she said. Harris also acknowledged that she had sometimes fallen short of that goal. “Was I able to get enough done? Absolutely not,” she conceded. But she argued that her experience will help her finish the job as President. The exchange showed that Harris knows she still has a lot of explaining to do.—Alana Abramson

7. There were glaring omissions.

In some ways, the third Democratic debate was most notable for the topics that weren’t tackled. Nearly 100% of Democrats who responded to a recent CNN poll said aggressive action against climate change was among their top priorities, yet only seven minutes were devoted to the topic in Houston. That’s more than reproductive rights, the federal courts, and the economy received—combined.

The lack of abortion-specific questions was glaring amid a period in which nine states have passed bills to limit access to the procedure, and right after Planned Parenthood—one of the largest providers of reproductive services in the country—said it would withdraw from the federal Title X family planning program rather than comply with a new Trump Administration rule about abortion counseling. Federal courts were left off the question list even though Trump has appointed more than 125 conservative judges who will inevitably wield power over policies like immigration and abortion. And although throngs of economists are warning an economic recession is on the horizon, moderators didn’t ask the candidates what they’d do to protect voters if the market crashes.—Abby Vesoulis 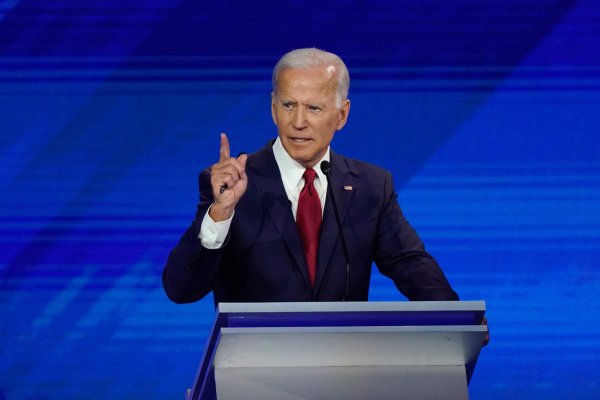 Joe Biden Suggested People Keep the 'Record Player on at Night' During 2020 Debate. The Internet Had Thoughts
Next Up: Editor's Pick