Clashes Erupt in Hong Kong as Thousands March on the U.S. Consulate to Call for Washington's Support

Clashes took place in the heart of Hong Kong Sunday as thousands of protesters marched on the U.S. consulate, calling for Washington’s help in their struggle for greater political freedom.

What began as as peaceful demonstration was cut short in the late afternoon as hardliners started fires and began erecting barricades on some of the city’s most prestigious streets, including Chater Road—location of the Court of Final Appeal, Cenotaph, and the ultra-exclusive Hong Kong Club.

They also smashed entrances to Central subway station, which serves the financial district and is one of Hong Kong’s most important transport hubs. The station was quickly closed down as scuffles took place between protesters and police; the district’s glitzy boutiques also brought down their shutters. A kilometer away, chanting crowds filled Admiralty station, which is situated by the legislature, main government offices, and the Chinese military garrison.

“We can’t let police think that what they do will scare us off,” said Lita, a 19-year-old university student, as her friends broke up the paving slabs outside the Hong Kong Club. “We’re doing this because the police beat and arrested our fellow protesters.”

Earlier in the day, many protesters waved the Stars and Stripes and played “The Star Spangled Banner” on speakers as they walked up Garden Road to the American legation. Marchers called on the U.S. to pass the Hong Kong Human Rights and Democracy Act—a measure that would require Washington to annually assess the enclave’s level of autonomy from Beijing and cancel its trading privileges if that autonomy is compromised.

The idea is to incentivize Beijing to keep its hands off the former British colony, because scrapping Hong Kong’s privileges would economically hurt mainland China, which regards the city as a valuable entrepôt and capital market.

“We hope Congress will pass the act. The session resumes next week, so this is good timing,” one protester called Catherine told TIME. “The U.S. government treasures values like democracy, justice and human rights.”

“We want the international community to care about what is happening in Hong Kong and to help us,” said Kelli Lo, 28, who was waving two small U.S. flags. “Trump can push China to step back.”

The Hong Kong government issued a statement condemning “the illegal behavior of the radical protesters,” expressing “regret over the re-introduction of the Act,” and reiterating “that foreign legislatures should not interfere in any form in the internal affairs” of Hong Kong.

In a separate development, prominent campaigner Joshua Wong was arrested as he attempted to leave the territory on trip to the U.S. and Germany. In a statement released via his political party Demosisto, he said “I was arrested by police for ‘breaching bail conditions’ this morning at the airport’s customs and I am detained in custody now.”

He said that he had been given prior approval for his trip and called the decision to detain him a “direct consequence” of his “political prosecution.”

Hong Kong has endured more than three months of unrest, which began as a campaign against a hated extradition bill but quickly escalated into a rebellion against the territory’s unrepresentative, Beijing-backed government. The democratic movement is calling for universal suffrage as well as exoneration for all protesters arrested to date, and an independent inquiry into alleged police brutality in the handling of the protests. Many protesters also want self-determination, or even independence, for the territory, which was retroceded to China in 1997 after 156 years of British rule and promised a “high degree” of autonomy as part of the handover deal.

Last week, Hong Kong’s top official, Chief Executive Carrie Lam, finally withdrew the extradition bill. (The proposed law would have allowed return of fugitives to mainland China and was therefore seen by Hongkongers as a tool to allow Beijing to round-up dissidents and critics.) But what was intended as a major concession to the protesters instead provoked scorn as many—even pro-government politicians—chastised Lam for doing too little, too late.

The call for U.S. intervention has infuriated Beijing, which regards the unrest in Hong Kong as a separatist color revolution, stirred up by hostile Western powers. But so far, the protesters show no signs of backing down.

“When the American Army comes,” one protester scrawled Sunday outside the Bank of China, “I’ll lead the way.” 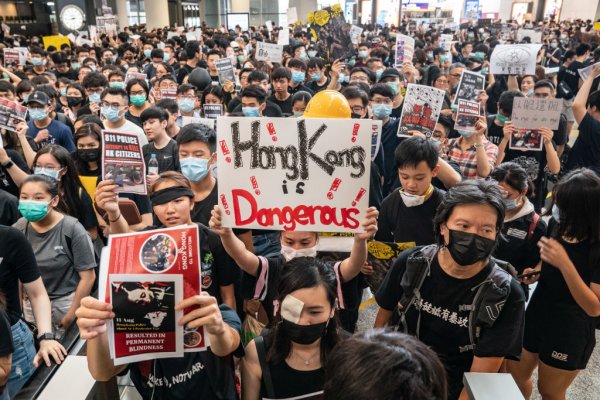 Hong Kong Braces for Another Round of Weekend Protests
Next Up: Editor's Pick