Bahamians are scrambling to respond to a catastrophic Category 5 hurricane that the nation’s Prime Minister has described as a “historic tragedy” since the slow-moving storm made landfall Sunday. Hurricane Dorian has claimed at least 43 lives and destroyed many buildings, especially on the islands of Grand Bahama and Abaco.

Governments and nonprofits are offering money, workers and other aid to help with the rescue and recovery effort. According to the Red Cross, about 45% of the homes on Grand Bahama and Abaco — about 13,000 houses — are believed to be severely damaged or destroyed as a result of the storm, and some 62,000 people will need clean drinking water, the Associated Press reports. U.N. officials said that more than 60,000 people will need food assistance.

At the same time, Bahamians have carried out their own efforts to account for loved ones, posting frantic photos and notes on Facebook and WhatsApp begging for word about missing friends and family members.

Here’s what to know about the devastation the Bahamas is facing now that Dorian has roared through.

What is the hurricane’s death toll?

The death toll has steadily risen as officials have gained access to areas cut off by the storm. Forty-three people have been confirmed dead, but Bahamian Prime Minister Hubert Minnis has warned that more people are likely dead.

“So many families have been impacted by the devastation, including those trapped during the storm,” Prime Minister Hubert Minnis said Wednesday at a press conference. “Just about every Bahamian throughout the country has been worried about loved ones on Grand Bahama and Abaco.”

How bad is the destruction?

Aliana Alexis of Haiti stands on the concrete slab of what is left of her home after destruction from Hurricane Dorian in an area called "The Mudd" at Marsh Harbour in Great Abaco Island, Bahamas on Thursday, Sept. 5, 2019.
Miami Herald—TNS via Getty Images

Much of the severe damage appears to be concentrated on the Abaco islands, a chain of islands in the northern Bahamas known as a boating destination. The Prime Minister said Tuesday that parts of Abaco are 60% destroyed.

Local communities within the Abaco islands have reported significant damage. A community known as The Mudd, which was built over time by Haitian immigrants, was “razed” by the storm, according to the AP. Most of the houses in Marsh Harbour, one of the largest towns in Abaco, were destroyed by the storm, the Miami Herald has reported.

Minnis said that most homes on Grand Bahama seem to have sustained “minor damage,” and he said he’s personally seen damage to homes, infrastructure and other buildings.

The Bahamas’ southern islands, including its capital, Nassau, were not affected by the storm.

The Category 5 hurricane was both powerful and slow-moving. When it made landfall, Hurricane Dorian had sustained winds of up to 185 mph. Moving as slowly as 1 or 2 mph, the hurricane arrived in the Bahamas on Sunday and did not have the all-clear until Wednesday morning.

What are the relief efforts?

Other countries, private companies and nonprofits have mobilized to support the relief effort in the Bahamas, although the nation has faced challenges as it’s worked to prepare airports and a harbor damaged by the storm into a position to receive much-needed support.

Ravelle Dean, a volunteer with the Bahamas’ National Emergency Management Agency (NEMA) who is designated to speak on behalf of the agency, tells TIME that two of Abaco’s three airports are now open to private planes. The Sandy Point Airport was unaffected by the storm, and Marsh Harbour was reopened on Thursday morning. Treasure Cay Airport is open only to rescue and recovery helicopters.

However, aircraft need to receive permits from NEMA to enter the airports, and the agency has been “inundated” with calls, Dean says.

“There’s definite frustration on some people’s ends,” she adds. “We’re trying to go as fast as we can.”

The U.S. Coast Guard has sent crews to help with the relief response; as of Thursday morning, the Coast Guard said it had rescued 135 people and six pets in the Bahamas since the beginning of the storm. The Coast Guard also provided a helicopter for Prime Minister Minnis to survey the aftermath of the storm.

The United Nations has pledged $1 million in aid, and the U.N. World Food Program has bought eight tons of ready-to-eat meals that it is working to bring to the Bahamas. Canada has also pledged $500,000 to the relief effort, according to Minnis.

Members of the Humanitarian and Disaster Relief (HADR) team from The Royal Fleet Auxiliary ship Mounts Bay deliver aid to the Islanders of Great Abaco in The Bahamas on September 4, 2019.
AFP Photo / UK MOD / CROWN COPYRIGHT 2019

What can you do to help?

NEMA has set up the Bahamas Disaster Relief Fund, and posted instructions on Twitter for how to donate.

A number of other organizations are also collecting donations for the Bahamas, including the American Red Cross, Americares and World Central Kitchen, the nonprofit founded by celebrity chef José Andrés, who has been on the ground in the Bahamas and shared images of devastation. 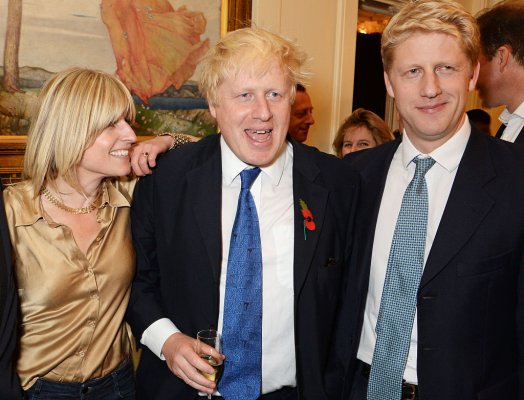 U.K. Prime Minister's Brother Resigns From Government: 'Torn Between Family Loyalty and the National Interest'
Next Up: Editor's Pick