At least 1 million people have been ordered to evacuate in three U.S. states beginning Monday ahead of Hurricane Dorian, a slow-moving Category 4 storm currently raging over the Bahamas.

Hurricane Dorian is the most powerful such storm to hit the Bahamas since records began, with maximum sustained winds of over 185 miles per hour when it made landfall Sunday afternoon. It is moving westwards and is projected to hit or skirt areas along the U.S. east coast, the National Hurricane Center (NHC) said Monday. It’s likely to remain a Category 4 hurricane as it approaches the continental U.S., but is still “extremely dangerous,” the NHC says.

The NHC has issued a hurricane watch for Florida’s east coast from Deerfield Beach north to the Volusia and Brevard county line. Officials in Florida, Georgia, South Carolina and North Carolina have all declared states of emergency ahead of Dorian.

The South Carolina evacuation order covers approximately 830,000 people living in eight coastal countries. In Georgia, around 300,000 people living east of Interstate 95 have been told to evacuate. Authorities in Florida have also ordered mandatory evacuations in some vulnerable coastal areas. On Saturday, Florida Governor Ron DeSantis warned residents along the state’s Atlantic coast that “we’re not out of the woods yet.”

Here’s a list of the counties, towns, cities and other communities under evacuation orders as Hurricane Dorian approaches the U.S. east coast. 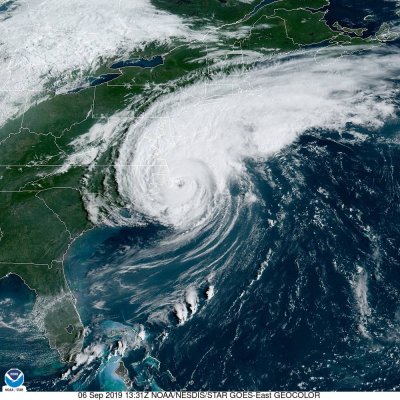 Dorian Makes Landfall in N.C.
Next Up: Editor's Pick