Paris Hilton Is an Insanely Successful DJ. Here’s What Happened When We Went Clubbing With Her

Just after dawn on a Monday morning in Ibiza, you will find Paris Hilton decked out in a shiny bathing suit, standing high above thousands of partiers at the mega-club Amnesia, spraying giant streams of foam onto the soaked masses below. She’s cheerily posing for pictures with fans, hangers-on and VIPs. She’s dancing exuberantly in heels, surrounded by bikini-clad models. As night turns to morning, the bubbly energy that cemented her as a fixture on the party circuit will never falter. As Hilton will be the first to tell you, she’s a professional. And this is her business.

“Inventing getting paid to party — I’m sorry, people want to hate on that? I think it’s pretty awesome,” Hilton said the day before, sipping rosé and reclining on a shady poolside couch at the Nobu Hotel on the famed Spanish vacation island. She may have risen to fame playing a simpleton on the reality series The Simple Life in 2003, but arriving at the place she is now — creator of a lucrative global business empire and reportedly the highest-paid female DJ in the world — has required brains far beyond what that caricature might have suggested she possesses.

Now 36, she is the master of an ever-expanding franchise that counts 23 perfumes, 19 product lines (including a new “Unicorn Mist” spray), over 45 stores, an upcoming app and VR project, one album and another forthcoming, not to mention her charity work to raise money for underprivileged children. She’s gone from heiress to a hotel fortune — her great-grandfather Conrad Hilton founded Hilton Hotels — to bonafide hotelier: she plans to open her second self-branded hotel site soon, after opening the Paris Beach Club residences in the Philippines in 2013. In fact, she insists, she’s barely taken a dollar from her family since flying the coop as a teenager.

And then there’s the DJ thing.

Despite what it might look like to skeptical onlookers — celebrity makes a foray into a glamorous side gig on a whim — Hilton’s career as a DJ is a relentless grind. She is on the road 250 days a year, she says, and makes sure her team books her until 4:00 a.m. whenever they can. “As a businesswoman, I want to get the biggest fee possible, so I want to go to the places where they have a budget and it’ll be worth my time,” she says. That’s why she’s spending Monday morning at the club for her weekly summer Foam and Diamonds Party. Amnesia is a regular gig: she’s been a resident summer DJ for five years running, putting on an eclectic set for two near-dawn hours every Sunday night.

This particular gig is something of a homecoming. Amnesia was the first big party Hilton ever checked out on the island, after tricking her father Richard into letting her and her sister Nicky jet off to Ibiza as teens. (They told him they were headed to Cannes.) She met the owner on that first night and says she knew even then that she would one day be behind the booth.

When Hilton relocated to Manhattan from California as a teenager, she became one of the world’s first modern celebrities known for the simple fact of being famous. She kicked off her career on camera by signing with Trump Model Management. But it was what she did in her off-hours that brought her notoriety. “It wasn’t just a socialite; it was something different,” she recalls. “I was before my time, I guess.” In person, Hilton’s voice is low and direct, the girlish baby talk for which she was once known creeping in only sporadically.

In her tiaras and hot-pink everything, Hilton was a breed apart from more “prim and proper” socialites. “But I didn’t really care,” she says. “I didn’t want to be like everyone else.” Instead, she paved her own way as a reality TV star, monetizing the public’s fascination with her life and pioneering a playbook for future celebrities to mimic. (Consider mega-model Kendall Jenner, who recently wore a replica of Hilton’s iconic bedazzled 21st birthday party dress to celebrate the same occasion.)

Soon, she became a sought-after party host. Spending time in clubs with the likes of the legendary DJ AM, she developed an interest in the music scene. In 2006, she made her first foray into pop with “Stars Are Blind,” a bubblegum-inflected track off an eponymous album that charted high on Billboard. Now, she’s recording her second album, working on what she calls a “whole new sound.” She promises deep house, techno-pop and electro-pop, naming Katy Perry, DJ Chuckie, Michael Jackson and Madonna as some of her biggest influences.

Hilton’s job as a DJ starts when she wakes up, often late in the day after going out to other clubs to support her fellow DJs and friends. (Except for Saturdays, when she stays in.) She puts together an extensive playlist for the night, with some songs getting a personalized remix or mashup. “I’ve always been a huge tech geek,” she says of her approach to editing and playing; right now she’s using the newest high-end Denon equipment. By 2:00 a.m., she makes her way to her dressing room. And as she revs up to perform, she’s calming her butterflies.

“I’m a really naturally shy person, so I get nervous in the beginning,” she says. With her tonight as she prepares are some dancers, her manager, an intern and her boyfriend, actor Chris Zylka, a stalwart presence who has rarely left her side for over two years. (Literally: she insists they haven’t been apart more than three hours since a fateful first date in Miami.) They are effusive about one another. “I know he’s going to be the perfect man, perfect dad, perfect husband,” she gushes. “She’s the most beautiful girl in the world inside and out, and I feel so lucky she’s mine,” he gushes right back.

Despite her nerves, in the midst of the backstage buzz, she offers to fix my makeup, giving me an expertly-applied flick of eyeliner. Then I’m whisked away to her VIP section, a cordoned-off balcony area with booze and dancers. Way below, sparkling in a bedazzled dress, Hilton throws back her long blonde extensions, puts on her headphones and queues up the tunes. The princess of Ibiza is ready to party.

The partiers below are an eclectic mix, ranging from what appear to be tweens to middle-aged fans. So Hilton goes right for the feel-good favorites, spinning techno remixes of nostalgic classics like Oasis’s “Wonderwall” and Michael Jackson’s “P.Y.T.” Tonight, clubgoers are also treated to some of her original music, which she performs live while twirling around a pole.

The set ends well past 5:00 a.m., when she hurries up to the VIP balcony, making a quick change into that shiny bathing suit. Everyone is keyed up, but none more than Hilton. Finally, it’s time for the foam, which shoots out into the crowd from industrial cannons at an alarming rate. The club tosses giant inflated pool floaties into the rising sea of bubbles for partiers who want to stay above the scrum. And just as soon as it has started, it ends, the crowd dissipating as the bubbles condense into leftover suds.

But it’s not quite over for Hilton. She’s hustled to a windowless dressing room to shower while her entourage smokes cigarettes on beat-up old couches. When she reappears — hair wet, makeup melted away — she’s still not ready for sleep. It’s not until well past 8:00 a.m. that the club’s attendants kindly but firmly announce that it’s time to leave. Hilton emerges into the bright and hot day to retreat to her villa with Zylka, where she’ll wind down with some TV, maybe post a few Instagram Stories. Eventually she’ll get a few hours of sleep and grab a bite. And then? The club circuit continues — for now.

Despite her prominent perch in the world of disco balls and beats, Hilton is already contemplating a future beyond the club. She says she’s grown up in the last few years. The baby-voiced “character” she played in the past has been retired for good. As she pauses to reach for a prosciutto canapé at the Nobu lounge, a woman interrupts her, flanked by two young children. Immediately, Hilton begins to coo.

“I can’t wait for the next step in our life, to have beautiful babies,” she tells me when they walk away. “Then I feel like my life will be complete, you know what I mean? I may feel like a kid and look like a kid, but I’m not. I would love to just, like, move on. To continue being a businesswoman, but to have a family.” Kids are a recurring theme: she hosts weekly kid-friendly DJ parties for local families and mentions a recent visit to an orphanage in India.

That’s when her eyes well up. “I want to be remembered for so much more,” she says. “People are so mean. And they don’t know me. I get so misjudged. Just because my last name is Hilton does not mean that I’m some stuck-up brat,” she insists, adding that she would even DJ for free. It’s the music — the vibe, the scene, the experience of presiding over a party — that ultimately brings her pleasure.

With that, the princess of Ibiza heads out into the evening. 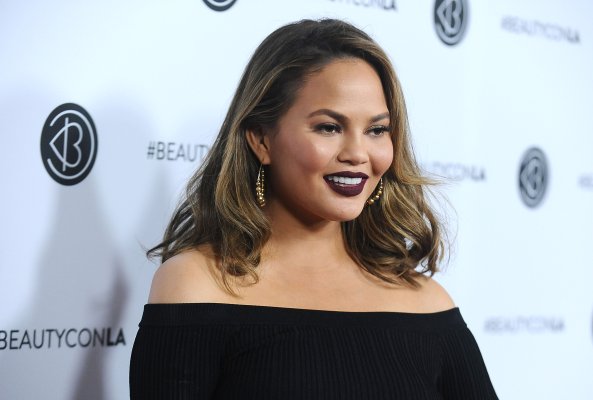 Chrissy Teigen Left a Waitress a Jaw-Dropping Tip
Next Up: Editor's Pick