Christian Siriano on Designing in a World With Hate: 'I Dress People I Can Support.'

In the past year, Christian Siriano’s designs have been spotted everywhere. So much so that you’ve seen them on red carpets, awards shows, and even the DNC, where Michelle Obama sported one of his dresses to give her now-iconic “when they go low, we go high” speech.

With this kind of success, it could be easy to forget that Siriano got his start nearly a decade ago on Project Runway, where his unapologetically glamorous designs that eventually crowned him the winner of season 4. In the years since he was on the show, Siriano has become the go-to designer for some of the most prominent women in the world, thanks to his career-long commitment to designing clothes that flatter all women, regardless of size or background.

From creating a custom gown for SNL star Leslie Jones after she tweeted that no designer wanted to dress her for a movie premiere to ensuring that the diverse range of models he uses for his runways aren’t just “token” representation, Siriano knows that the inclusivity that his brand embodies is key to its success.

“Women are wanting to wear my clothes not only because they’re great clothes but because of what we represent,” he said.

This year looks to be another year of wins for the designer, who recently designed the wedding looks for the first couple of Orange Is the New Black, Samira Wiley and Lauren Morelli. TIME caught up with Siriano backstage at the American Express Platinum takeover of the musical Hamilton, where he talked about his leading ladies, diversity in fashion, and why he won’t be dressing Melania Trump anytime soon.

TIME: You recently designed the beautiful wedding looks for Lauren Morelli and Samira Wiley’s wedding — how did that happen?

Christian Siriano: They just asked me. I had dressed Samira for a bunch of awards shows, I dressed her for her first Emmys, I dressed her for the SAG Awards once, so we just became friends over the years. It kind of just worked out, super organic, and I was just honored to do it. They also both like fashion, so it was kind of nice to have brides that’ll wear something interesting.

Did you collaborate with them on the designs?

Yeah, a little bit. I think Samira knew that she wanted to be in something sort of grand and kind of unexpected — I think people sort of thought that she would wear a suit, but she wanted the total opposite. And for Lauren, the idea was that she wanted it to be kind of masculine but still feminine enough that it didn’t feel kind of cliché. They were very easy-going brides, probably the easiest brides I’ve had in a long time. The wedding was amazing. It was really nice because it was so small and just people that they loved. That’s the best kind of wedding.

I think what’s been amazing to see is the diversity of your designs, especially on the runway, from the beginning. You’ve always embraced all body types, all ethnic backgrounds. Why is diversity so important to you?

I think more and more in fashion now, diversity is so important because that’s what the customer is. My woman, the person who’s buying the clothes, is from all walks in life, she’s from different countries and cultures, she’s going to be different sizes. I felt that it was really important to start showing that right at the beginning of the process.

On your runway this season, you had a shirt that read “People are people,” which is one of many, many statement shirts that I saw that could be read politically this season. What prompted you to make the shirt?

There’s a lot of hate going on in the world, so I took it as a phrase “people are people” because that’s what it is — we all are living in this world, we all are here for different purposes, and different reasons. As I’ve been in this business now for almost ten years, I’ve realized that that’s a little more important, that we all try to celebrate each other a little bit more because there’s enough hate going on in the world.

In a lot of ways, it was great because she definitely got her Cinderella moment which she so totally deserves. I love her, I’m a huge SNL fan, I’ve dressed a lot of them — Amy [Poehler], Tina [Fey], and I wanted to give her that same moment. And she looked f—king fabulous.

Speaking of another special lady wearing your clothes, I saw that Michelle Obama was wearing your dress when she gave her amazing speech at the DNC. You’ve had quite the year.

Michelle Obama is not an average, ‘It girl’ woman and I think that’s why she’s so fabulous. I didn’t know [she was going to be wearing it] but it was amazing. Such a great moment! But even when anybody wears something, we dressed Celine Dion recently, who I’ve been a fan of my entire life and that was exciting. Everyone is exciting! When you want to be a designer, you think about the people that you want to make clothes for and I’m lucky enough that I’ve gotten to make things for people that I admire.

How do you feel about getting your start on reality tv and now becoming a red carpet staple?

I actually don’t think about it too much. I think everybody has to find their way into the world and everybody has different paths. I just try to make pretty clothes and hope that people like them. I think what’s interesting is that I’ve been doing kind of the same thing for a really long time, but people are just starting to notice it.

Would you dress Melania Trump?

Do you think that it’s important that designers like Sophie Theallet and Marc Jacobs are making political statements by refusing to dress Melania?

I think to an extent, it’s important because as designers, that’s the only voice we have. But it’s not just her. If I got a call from somebody tomorrow that was, say, a musician, who was all over Twitter or Instagram hate-bashing people, I wouldn’t dress her either. I dress people that I can support and support what they’re doing in their lives. That’s why it’s important to me and it should be important to every designer because the people that you put in your brand represent the brand. 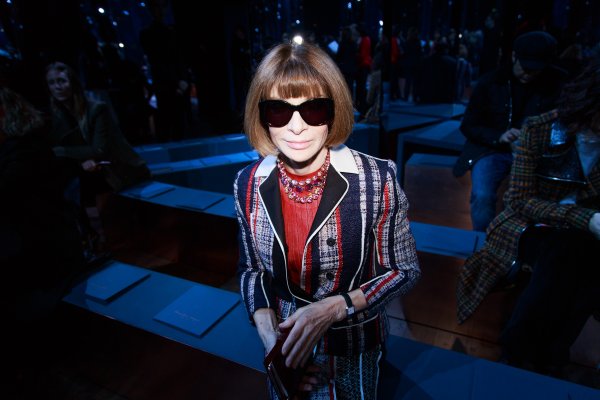 Why Anna Wintour Is Auctioning Off a Pair of Her Iconic Chanel Sunglasses
Next Up: Editor's Pick