Jane Goodall: These 4 Issues May Not Seem Related to Climate Change. But They Are and We Need to Solve Them Now

I’ve stood with Inuit elders by a great ice cliff in Greenland as water cascaded down and icebergs calved. It never used to melt, the elders told me. I’ve witnessed the shrinking of a Mount Kilimanjaro glacier. I’ve watched wildfires rage in Africa and in California. And I’ve seen the carcasses of animals who have died in droughts.

As I travel around the globe, people tell me how the weather patterns have been disrupted and the worst kind of hurricanes, typhoons and cyclones are getting more destructive and more frequent. It is because we are polluting and destroying the environment by using natural resources in an unsustainable way.

When I started my research in Gombe, Tanzania, in 1960, it was part of the forest belt that stretched across Africa. In 1990, I looked down from a small plane on an island of forest surrounded by completely bare hills. More people were living there than the land could support, so trees had been cleared to grow food or make charcoal.

In order to slow down climate change, we must solve four seemingly unsolvable problems. We must eliminate poverty. We must change the unsustainable lifestyles of so many of us. We must abolish corruption. And we must think about our growing human population. There are 7.7 billion of us today, and by 2050, the UN predicts there will be 9.7 billion. It is no wonder people have despaired. But I believe we have a window of time to have an impact. Here’s why I’m still optimistic.

The Resilience of Nature

Habitats and species on the brink of extinction can recover if given a chance. When I realized the plight of the people living around Gombe, the Jane Goodall Institute started a program called Tacare to help them find ways to make a livelihood that did not involve devastating the environment. As they realized that protecting forests is good not only for wildlife but also for their own future, they became our partners in conservation. Today we have Tacare in six other African countries, and the hills in Gombe aren’t bare anymore.

How is it possible that the most intellectual creature ever to walk the earth is destroying its only home? There has been a disconnect between our clever brains and our hearts. We do not ask how our decisions will help future generations, but how they will help us now, how they will help our shareholders, etc. Yet every day we are also inventing technology that enables us to live in greater harmony with the natural world (clean energy, for example). Those same communities around Gombe are using smartphones and satellite imagery to monitor their forests and set aside village land for regeneration.

Danish people try out bicycles being set up to produce electricity in the center of Copenhagen, Denmark.
Anja Niedringhaus—AP

These networks have enabled us to connect on issues in a way never before possible. It was the People’s Climate March in New York in 2014 that showed me this in real time. People posted and told others to join them, and what was supposed to be a march of 100,000 turned into one of 400,000.

The Power of Young People

I started Roots & Shoots—a program in which kindergartners and university students alike choose projects to make the world a better place for animals, people and the ­environment—in 1991 when I realized how many had lost hope. It exists now in more than 50 countries, and many participants are working on climate-change-related issues.

If we all get together, we can truly make a difference, but we must act now. The window of time is closing. 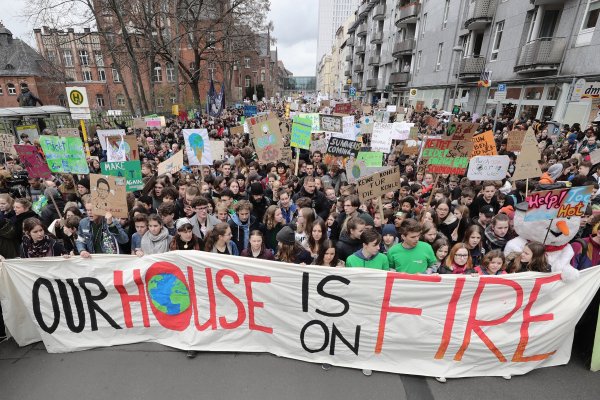 Al Gore: Youth Activists Are Demanding Action Against Climate Change. It’s Time For Us to Listen
Next Up: Editor's Pick