Large wildfires raging throughout California have claimed at least 44 lives statewide, destroyed thousands of structures and prompted hundreds of thousands to evacuate. A fire actively burning in Northern California took at least 42 lives, becoming the deadliest fire on state record.

Large fires have scorched populated areas of California over the past week, including the Camp Fire, north of Sacramento, which incinerated the entire town of Paradise, and the Woolsey Fire, which burns northwest of Los Angeles. Firefighters on Monday also battled the Rocky Peak fire, which sprung up near where the Woolsey fire began and forced the shutdown of the Route 118 freeway. The Camp Fire has become one of California’s most destructive fires in at least a century, according to the Associated Press.

Wildfires are a natural and annual occurrence in California, typically appearing toward the end of the long, dry summers. In four out of five cases, people provide the igniting spark. At the same time, the environment has also become more flammable. As the state grows hotter and increasingly subject to prolonged droughts, and as more people live in high risk areas, the fires simply get bigger, more severe and more costly to put out.

Experts say we should continue to expect more extreme fires in California. Here’s why:

Preceding California’s 2018 wildfires were some of the state’s hottest temperatures ever. July 2018 marked California’s hottest month in recorded history at 79.7 degrees Fahrenheit, according to the National Oceanic and Atmospheric Administration. The warm and dry conditions across California in July created “ideal wildfire conditions,” the NOAA report said, leading to numerous destructive wildfires across California in July and August, including the Carr fire, which killed at least eight people. The summer of 2017 was California’s hottest summer in the state’s record, with a heat wave that extended into September 2017.

The summer heat came as part of a regional, significant warming trend. Southern California has warmed by at least three degrees in the last century, and the state is becoming warmer as a whole, the Environmental Protection Agency said in 2016. A May 2018 report from the California Environmental Protection Agency found that long-term warming trends, including the rise in average temperatures and the number of hot days and nights, have grown in recent decades and are the underlying causes for weather-related incidents like wildfires and droughts.

Fire officials said the wildfires of the last week have changed in behavior following years of drought and record high temperatures that leave plant life very dry. The fires this year have impacted both Northern and Southern California at the same time, leaving limited resources for firefighters.

“Typically this time of year when we get fires in Southern California we can rely upon our mutual aid partners in Northern California to come assist us because this time of year they’ve already had significant rainfall or even snow,” Los Angeles County Fire Chief Daryl Osby said, according to AP. “It’s evident from that situation statewide that we’re in climate change and it’s going to be here for the foreseeable future.”

California’s Camp Fire totally destroyed Paradise, Calif. which is the second-largest city in Butte County with a population of about 26,682. The fire burned through 6,453 homes and killed at least 29 people. In Southern California, thousands of residents of Malibu and Calabasas and others around Los Angeles were forced to evacuate due to the Woolsey Fire, which killed 2 people.

California’s population increasingly lives in proximity to high-risk fire corridors, with residential neighborhoods spilling into previously rural or remote territory. As a result, wildfires that can devastate settled areas have become more frequent — so have tragic scenes of neighborhoods and trailer parks razed to the ground. The Forest Service calls these areas the wildland-urban interface (WUI).

The number of properties at risk of wildfire threat has grown to nearly 7 million in California, according to a Villanova University study published in August 2018. The figure marks more than a 1,000% increase in the number of homes and developed land in areas prone to wildfires since 1940.

According to a 2017 risk analysis by Verisk, 15% — or over two million — of California’s homes are concentrated in high or extremely high wildfire risk zones. Another 12% are located in moderate risk areas. This means more than a quarter of the state’s homes are at moderate to extremely high risk of being ravaged in an annual wildfire.

In these WUI areas, controlled burns of dry vegetation — an essential component of fire risk management — are no longer, or less frequently, conducted because of the potential hazards to residents. So when fires do erupt, a huge amount of vegetation goes up in smoke over a vast, combustible area.

California’s wildfires have become more costly to tame. When firefighters focus on protecting homes, they are unable to prioritize containing a fire — or erecting a barrier to prevent the further spread of the blaze.

Putting out fires in neighborhoods also demands both more personnel and more expensive equipment, further driving up the cost.

The Camp Fire and the Woolsey Fire are expected to top $19 billion in damages for homeowners, the state and insurers, Bloomberg reports. It’s a high price in a state where insurance premiums were already on the rise. State insurers lost about $16 billion last year, according to credit rating agency A.M. Best. The federal government spent nearly $3 billion on overall fire suppression in 2017.

A fiery future in store

With longer fire seasons and faster-moving, increasingly aggressive wildfires, California can expect much of the same in the coming years.

As climate change and residential expansion help fuel wildfires, the fires in turn can exacerbate the impact of global warming — when carbon-absorbing forests go up in smoke, they become another greenhouse gas source.

Weather models have long predicted that California will encounter more droughts, and more wildfires. A climate change assessment released by the state in August 2018 found that California could see a 77% increase in the average area burned across the state by 2100 if greenhouse gas emissions continue to rise. The frequency of wildfires burning more than 25,000 is likely to increase by about 50%. Wildfire insurance costs are predicted to rise by 18% by 2055, according to the report.

“These findings are profoundly serious and will continue to guide us as we confront the apocalyptic threat of irreversible climate change,” California Gov. Jerry Brown said of the study.

Correction: The original version of this story misstated the proportion of homes in California that are at moderate to extremely high risk of being impact by wildfires. It is more than one quarter, not more than one third. 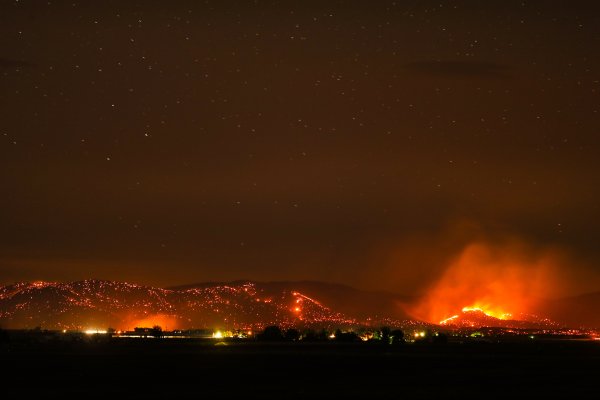 'My Ride or Die.' Woman Flees California Wildfires on a Bike With Her 70-Pound Dog
Next Up: Editor's Pick