People around the world need to take urgent action to protect the planet and all of its living in habitants, famed conservationist Jane Goodall told the TIME 100 Summit Tuesday.

“We have to get together and take action now,” Goodall said. “When hundreds, thousands, millions, and hopefully billions of us make ethical choices then we start moving toward a better world.”

Goodall, 85, has played a key role on the front lines of the conservation movement for decades. Her research gave the world new insight into primates, including discoveries such as how chimpanzees use tools in their everyday lives. She pioneered new ways of researching animals, including by living with them and using names to identify them.

“The way that I did this study was absolutely contrary to scientific norms at the time,” she said. “We were able to persuade science gradually to come out of this narrow reductionist way of thinking.”

She gained global notoriety for that work in the 1960s following the release of a documentary about her work. Since then has served as ambassador for wildlife and the conservation cause receiving numerous honors and launching multiple initiatives, including the Jane Goodall Institute, a global conservation group.

More recently, she has called for action on climate change and stressed how saving wildlife will also help address global warming. “You can’t save chimpanzees without saving the forest, which means you save all the biodiversity in that forest, which is so important and you save an environment which is so vital to us,” she said.

Goodall also had a message for the forces in society that have stopped the world from addressing global warming. “Deniers of climate change, I want them to go to the Antarctic where the sea ice is melting faster than ever before and dump them in the middle of it,” she said to laughter and applause.

Goodall received a standing ovation at the TIME 100 Summit, just one indicator of the broad generation of environmentalists she has inspired. Actor Leonardo DiCaprio wrote about her for this year’s TIME 100 issue, calling her a friend and inspiration. “Anyone who has heard her speak, or heard her story, has been mesmerized by her life’s work,” he wrote. 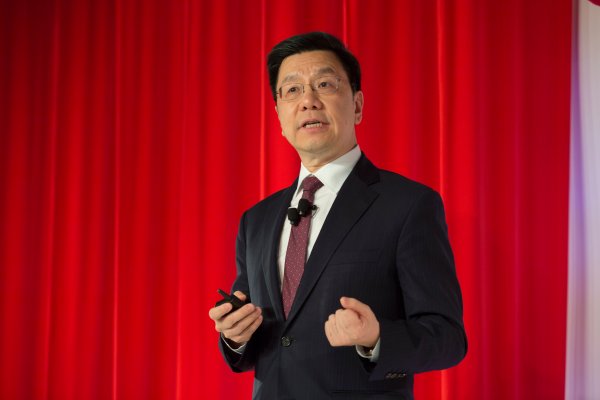 AI Expert Kai-Fu Lee Says We Need to 'Embrace' the Game-Changing Technology
Next Up: Editor's Pick