At the People’s Climate March in New York City on Sunday, a 4-ft.-tall walking banana was passionately articulating his feelings about wind turbines.

“They can make things run just by the wind,” said 9-year-old Danny Haemmerle, who dressed up as the yellow fruit to attend the march with his family. “And my parents don’t have to pay as much,” added his brother Eddie Haemmerle, 11, sporting a lime green wig.

The Haemmerles were joined by an estimated 400,000-strong crowd that flooded the streets of Manhattan to demand U.N. action on global warming — a showing that quadrupled expected attendance and made the march the largest climate protest in history and largest social demonstration of the past decade.

Timed to coincide with the U.N. summit on climate change, which meets this week to discuss an international carbon-emissions agreement, the demonstration was an international effort with 2,646 events in more than 150 countries, attended by hundreds of thousands more people.

Coalesced by several organizations, including Bill McKibben’s 350.org, the swarming crowds were there to pressure Obama and other leaders to make addressing climate change a top political priority. “Today, civil society acted at a scale that outdid even our own wildest expectations,” said May Boeve, executive director of 350.org, in a statement. “Tomorrow, we expect our political leaders to do the same.”

U.N. Secretary-General Ban Ki-moon made an appearance, along with New York City Mayor Bill de Blasio, former Vice President Al Gore, and movie stars like Leonardo DiCaprio and Edward Norton. Nearly every labor union joined the march, including the Service Employees International Union, the largest union in the city. The march was supposed to start at 59th Street, but the throng of people stretched past 93rd Street, and there were so many marchers that it took the back of the line over two hours to start moving. The march was so well attended that organizers had to send a text at 5 p.m., asking marchers to leave because the route had filled to capacity.

Zak Davidson, a 20-year-old junior at Tulane, iconoclastically wore a suit, explaining, “A lot of conservatives try to marginalize environmentalism as a fringe movement, like just people wearing hemp skirts. But I have a job offer in the government for when I graduate, and I’m going to continue fighting for climate change within the system.”

Davidson and 60 of his classmates drove 26 hours up from New Orleans to attend the march, and after it’s over, they’ll hop right back on the road and drive 26 hours again in order to make it to class on Tuesday.

“Moving to New Orleans really politicized me about climate change, since the Gulf Coast is predicted to have the worst sea-level rise,” said Davidson’s classmate, Emma Collin, 21. “It’s like being in Rome before the fall.”

The props at the Climate March were as colorful as the costumes: a massive model of the earth, along with hundreds of smaller balloons and beach balls; a giant, inflatable cow intended to highlight how the meat industry hurts the environment (a U.N. report found that animal agriculture accounts for 14.5% of greenhouse-gas emissions). People carried massive sunflower signs, sculptures of waves, goddess puppets and angel kites.

There was also a dinosaur, made of car parts and gas jugs, named BP-Rexosaurus, built by BikeBloc, a group dedicated to promoting bicycle transportation. “He’s here to tell us how to get pass fossil fuels before humans go extinct like dinosaurs,” explained Elissa Jiji, who was biking with the group. Other bikers dressed their bikes as swordfish, noting that swordfish bills often pierce oil pipelines. People chanted, “Exxon Mobile, BP, Shell, take your oil and go to hell!”

Often, people’s attire reflected the particular social issues within climate change to which they felt the closest.

A cohort of doctors marched in lab coats to protest the global health effects of climate change. “It’s one of the most important threats to world health, and it’s completely preventable,” said Dr. Erica Frank, who specializes in preventative medicine in British Columbia. “It would be irresponsible for us to do nothing.”

For demonstrator Favianna Rodriguez, climate change is inextricable from social issues like feminism and immigration policy. To protest a “culture of hypersexuality,” she marched topless, with yellow butterfly stickers over each nipple.

Rodriguez works with CultureStrike, an organization that supports the arts movement around immigration, but she helped design signs for the Climate March because she says climate change is an example of social inequality.

“The destruction we’re facing has been wrought under male leadership, and women and children are disproportionately affected,” she said. “Addressing climate change is going to require a very strong shift in leadership, and require us to include the vision of women and youth.”

The one thing that the whole crowd seemed to agree on, whether doctors, vegans, bike enthusiasts, hippies, feminists, students, Christians, toddlers, Native-Americans, farmers or grandparents: changing nothing about global environmental policy is a scary prospect.

“Inaction, dude,” said green-haired fine-arts student Joe George, when I asked him what was the scariest part about global warming. “I keep imagining where I live in Brooklyn, just under water. It’s horrifying. You can’t stop the Atlantic Ocean.” 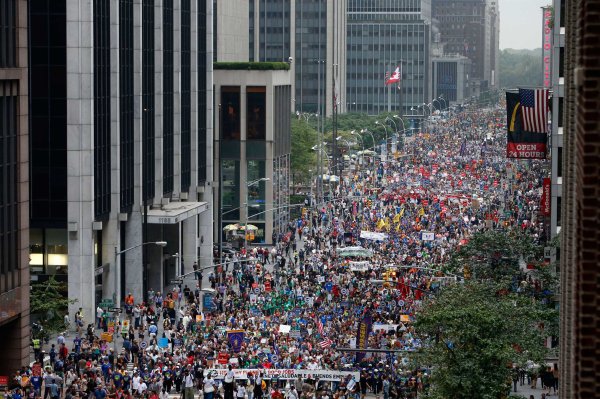 Global Swarming
Next Up: Editor's Pick