FILE - In this Nov. 16, 2018, photo, members of the U.S. military install multiple tiers of concertina wire along the banks of the Rio Grande near the Juarez-Lincoln Bridge at the U.S.-Mexico border in Laredo, Texas.
Eric Gay—AP
By W.J. Hennigan

The Pentagon announced two military contracts Tuesday worth $976 million to construct a wall along the U.S. border with Mexico, marking the first step toward President Donald Trump’s long-promised goal since he declared a national emergency nearly two months ago.

The Army Corps of Engineers awarded a $789 million contract to the Galveston, Texas-based company, SLSCO Ltd., for “border replacement wall construction” in Santa Teresa, N. M., near El Paso, Texas. Barnard Construction Co. Inc., of Bozeman, Mont., was awarded a contract worth $187 million for “design-bid-build construction project for primary pedestrian wall replacement” in Yuma, Ariz. Both projects, announced on the Defense Department website, are slated for completion in fall 2020.

To pay for these new barriers, the Pentagon is diverting up to $1 billion to support the DHS to block “drug-smuggling corridors” in those areas. The Defense Department, triggered by Trump’s emergency declaration to build a border wall, took the unprecedented tactic of notifying Congress about the transfer of funding, rather than requesting the money through the appropriations process. The move drew fire from Democrats and Republicans who saw it as a way for the administration to sidestep Congress’ Constitutional power over government spending.

Defense Department officials played what amounts to a bureaucratic shell game to get the money. The Pentagon took leftover money that was allocated for military personnel and transferred it into a counter-drug account. That move gives the military authority to take measures to support federal law enforcement efforts to stop drug trafficking.

The new sections of wall, and the controversial measures taken to pay for them, are only part of the Pentagon’s increasing entanglements in the Administration’s policy toward undocumented immigrants.

Trump directed the military to support the Department of Homeland Security (DHS) on the border more than a year ago. The Defense Department has approved nine DHS requests in the past year, including aerial reconnaissance, ground surveillance, search and rescue support, medical support, engineering support, helicopter transportation, personnel protection and other needs. U.S. troops have also spent five months welding coils of razor wire atop southern border fences and points of entry with Mexico in California, Arizona and Texas.

There are now about 5,000 troops, including 2,000 members of the National Guard, deployed along the 2,000 mile-long southwest border. Current structures line only 654 miles of the frontier, according to the U.S. Government Accountability Office. In recent weeks, U.S. forces started parking white pick-up trucks mounted with telescopic video cameras, known as “Mobile Surveillance Cameras,” in all nine border Patrol Sectors in each of the four states bordering Mexico. The devices are armed with infrared cameras, enabling troops to watch for illegal border crossings to operate day or night.

The Pentagon entanglements in administration migration policy have worried both parties on Capitol Hill, and top U.S. military leaders faced questions from Congress Tuesday about the months-long troop presence along the southern border with Mexico.

Marine Commandant Gen. Robert Neller wrote a memorandum last month to Navy Secretary Richard Spencer that listed factors that were causing budget shortfalls and impinging on Marines’ ability to fight in combat. He wrote that nine unplanned events, including pay raises, hurricane damage to bases and the ongoing border deployment, had posed “unacceptable risk to Marine Corps combat readiness and solvency.” When Neller’s memo later became public, much of the focus centered on his mention of the border mission.

However, Neller moved to downplay those concerns Tuesday as he sat alongside Spencer in front of the Senate Armed Services Committee, claiming that the deployment’s effects have been minimal thus far. “I personally checked the readiness of every unit down there, and with only one exception there was no impact on their actual readiness,” Neller said. “In fact a couple of units improved their readiness. So to say going to the border was degrading our readiness was not an accurate statement.”

“Five hundred men for a month on the southern border is $1.25 million,” he added. “In my mind, is that affecting my readiness stress? No, it is not.”

The Pentagon has spent a total of $292 million on the deployment, according to a seven-page Defense Department letter sent Tuesday to Rep. Anthony Brown, a Maryland Democrat, who requested additional information about the mission. The letter, obtained by TIME, states the estimated cost of Pentagon support is at least $431 million through this fiscal year.

The Pentagon is also on the hook to help shelter 5,000 migrant children caught crossing the U.S. southern border without a parent. It’s unclear where exactly the short-term detention camps will be, but the Defense Department identified Goodfellow Air Force Base in Texas as a potential location last June for the growing number of migrants swept into the federal system due to the Administration’s “zero tolerance” policy.

The impending decision comes as new data released by the U.S. Customs and Border Protection (CBP) shows that unauthorized crossings, especially of family units, along the Mexico border had surged to record levels in recent months. Officials said Tuesday that 92,000 migrants were apprehended during a record-setting March. Of that total, 8,900 were unaccompanied minors — a nearly 120% increase over March 2018.

As for the newly contracted border wall, plans are still in the earliest stages. The Army Corps of Engineers in recent weeks began drawing up assessments for 57 miles of 18-foot-high barrier in the towns, which have become the busy corridors for illegal crossings. The proposal called for construction of a 46-mile barrier at Santa Teresa, which received six bids from prospective contractors, and 11 miles at Yuma, which received three bids. 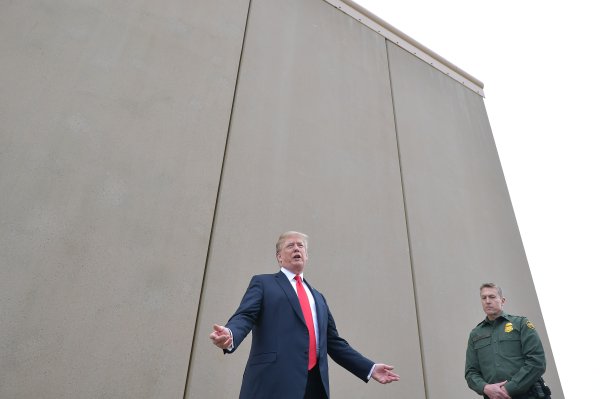 Trump Shakes Up Immigration Agenda
Next Up: Editor's Pick