The Odessa Police Chief Is Refusing to Name the Mass Shooter. It's Part of a Growing Trend

“I’m not going to give him any notoriety for what he did,” Gerke said at a Sunday press conference. He added that the shooter’s name will be revealed at some point.

Gerke’s refusal to name the shooter did little to stop the attacker’s identity from getting out, as other law enforcement officials identified the gunman — who was killed by police — later on Sunday.

But faced with mass shootings that have developed into a numbingly regular occurrence, Gerke is far from the only official who has been reluctant to publicly identify the killers.

Following an armed rampage in a Virginia Beach municipal center in late May that left twelve people dead and four injured, Virginia Beach Police Chief James Cervera said that authorities would only mention the gunman’s name once “and then he will be forever referred to as ‘the suspect’” to keep the focus on the victims.

And after the terrorist attack on two mosques in Christchurch, New Zealand in March, New Zealand prime minister Jacinda Ardern refused to mention the perpetrator’s name at all.

Not all law enforcement officials have been reluctant to identify the shooters following mass gun violence. But the Odessa police chief’s unwillingness to name the perpetrator is still part of a larger trend — a shift on the part of many law enforcement officials and media outlets to downplay the identities and biographical details of mass shooters in order to potentially avoid inspiring other individuals to carry out similar atrocities, or to give undue attention to a perpetrator.

In recent years, activists have founded organizations dedicated to preventing shooters from gaining wide recognition. These groups, including No Notoriety, which was founded by Tom and Caren Teves after their son Alex was killed in the Aurora, Colorado theater shooting in 2012, encourage those reporting on mass shootings to downplay the name and likeness of the perpetrators, and instead report more deeply on victims and communities affected by violence.

Another organization, Suicide Awareness Voices of Education (SAVE) has published a set of recommendations for media organizations on how to avoid reporting that can glorify mass shooters. And in 2017, a group of 149 academics and law enforcement professionals signed an open letter asking that media organizations not use the name or likeness of mass killers.

“Not only does publishing the names and photos of these perpetrators often essentially reward them with fame and attention…but in addition the attention they get is an incentive for them to kill more victims,” says Adam Lankford, a criminology professor at The University of Alabama who signed the open letter in 2017. “They accurately recognize that the more victims you kill the more attention you get.”

Sherry Towers, a researcher at Arizona State University’s Simon A. Levin Mathematical, Computational and Modeling Sciences Center, published a paper in 2015 on the contagion effect in mass shootings, suggesting that media coverage of high-profile shootings may have an effect in inspiring others to carry out similar attacks.

“Widespread national media attention paid to these events may be playing some role in actually precipitating some of the events,” Towers tells TIME. “What our research found was that 20-30% of such incidents appear to have been inspired by a previous incident.”

Many news organizations have incorporated recommendations from advocacy groups in writing on mass shootings, avoiding coverage that pays undue attention to the perpetrators and encouraging reporting on the victims. However, not all experts agree on the best way to avoid inadvertently glorifying mass shooters in the eyes of some individuals.

“There’s a contagion effect, but it’s not related so much to naming the shooters or showing their photographs,” says James Alan Fox, a professor of criminology, law, and public policy at Northeastern University. “What like-minded individuals applaud is the act, not the actor.”

According to Fox, it’s not publishing mass killers’ names and photos that is the problem, but rather the focus on “trivial” biographical details that make violent actors appear larger than life.

And in a worrying trend, some experts also believe that focus on the coverage of mass shootings — including finger-pointing at and between media organizations — may serve as a welcome distraction for those who wish to deflect attention from the primary factor driving American gun violence: the prevalence of the guns themselves.

“We found there was no relationship to mental illness, but we found that there was a very significant relationship to the prevalence of firearm ownership,” Towers says. “We hypothesize that media is playing a role, but it certainly is not the only dynamic that’s going on.” 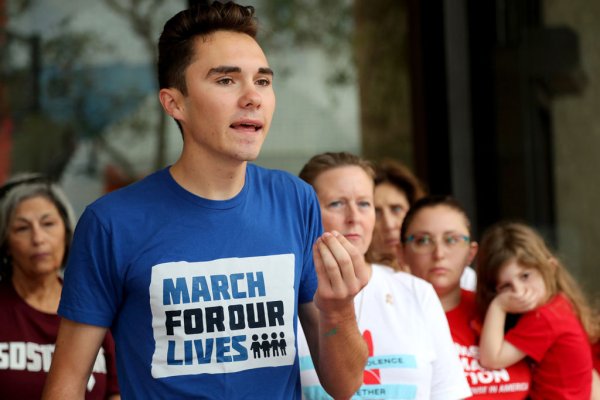 March For Our Lives Proposes Sweeping Gun Restrictions
Next Up: Editor's Pick