For countless people in the West Texas cities of Midland and Odessa, Saturday was a day of terror and tragedy as a gunman went on a violent rampage that left 7 dead and many more injured.

Odessa grandmother Shauna Saxton says she narrowly escaped becoming a victim, and described a dramatic encounter with the suspected gunman, explaining how she locked eyes with him while driving.

“A gold car pulled up, and the man was there, and he had a very large gun, and it was pointing at me,” Saxton explained in an emotional interview with local station CBS7.

Saxton, as she explains, was driving north on Odessa’s Loop 338 with her husband and grandson Saturday afternoon when she heard a series of loud popping sounds and then saw the gunman drive up next to them.

“He was looking at me. I saw his face. I saw that weapon. The only thing I could think about was my little grandson in the back seat. I just thought ‘Oh my god, what if something happened to him?'”

Saxton says she drove aggressively, trying to get away as the gunman tailed her vehicle. Eventually, she was able to escape onto a side street, only to realize that others near the shooter’s car were still in danger.

“My next thought is, ‘Oh my gosh, what if he shoots somebody else?'” Saxton said. “I couldn’t help them. I couldn’t warn them.”

“Frankly, at the moment I was just running, really running for my life,” she added.

Authorities confirmed the gunman was killed by police outside the Cinergy movie theater in Odessa. His name has not yet been released, but he has been described by police as a white man in his mid-30s. The mass shooting began following a routine traffic stop, and caused chaos as the gunman is believed to have later switched vehicles, hijacking a U.S. Postal Service mail van.

For Saxton and other near-victims of the Odessa shootings, the moments of terror may be over, but the trauma of the experience may take months or longer to dissipate.

“Somebody tried to kill me today,” Saxton told CBS7. “What do you do with that? How do you process that?”

“I’m just dealing with the fact that there’s some pretty sick people in society who are doing some seriously bad things to hurt people.”

Though few details about the suspect have emerged, Saxton said the gunman’s expression left an impact on her.

“The look on his face was, he was not self possessed,” Saxton said. “It wasn’t a methodical thing. He was just randomly trying to kill whoever he could kill.” 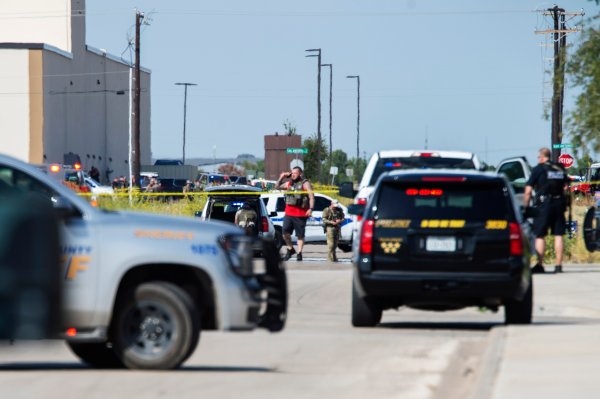 7 Killed, 22 Injured in Odessa Mass Shooting
Next Up: Editor's Pick