What We Know So Far About the New Zealand Mosque Shootings

One suspect has been charged with murder after at least 50 people were killed and more than 40 others were injured in mass shootings at two mosques in New Zealand on Friday.

The attacks occurred while worshippers attended Friday prayers. The main attack happened at Masjid Al Noor in central Christchurch, the largest city on the country’s southern island, where 42 people were killed, police said. A second shooting took place at Linwood Masjid, in an eastern suburb of Christchurch, where seven people were killed. Another person died after being transported to a hospital.

A number of explosive devices attached to vehicles were reportedly defused after the attack.

Here’s what we know so far about the events unfolding in New Zealand.

One person has been charged with murder

A 28-year-old man, who authorities identified as Brenton Tarrant, charged with murder, appeared in Christchurch District Court briefly on Saturday. Two other people remained in police custody Saturday, after a total of four people — three men and one woman — were initially detained as suspects.

The two other suspects have not yet been named. Ardern said none of them had criminal histories, nor were they on any watch lists of Australian or New Zealand intelligence agencies. She said there was one “primary perpetrator,” an Australian citizen, who used five guns during the attack — including two semi-automatic weapons and two shotguns. He was in possession of a gun license, she said.

A man by the name of Brenton Tarrant posted a hate-filled manifesto to social media, according to the Morning Herald.

“Given the rise of extremism, extreme-right extremism, our security and intelligence services had increased their work in that area,” Ardern said at a press conference Saturday. “But even then, this particular individual, as I said, was not known to our intelligence agencies and was not on any kind of watch list. So that obviously means that there are questions we’ll be looking for answers on.”

“This was a premeditated attack,” Christchurch Mayor Lianne Dalziel said at a press conference Saturday morning. “It was designed by somebody who came here from Australia to New Zealand, deliberately choosing a safe place to make a statement.”

50 people were killed in the New Zealand mosque shootings

New Zealand Police Commissioner Mike Bush initially stated that at least 49 people were killed in the shootings, which he called a “terrorist attack.” The New Zealand Police later confirmed that an additional body was found at the Al Noor mosque, bringing the death toll to 50. Bush said Saturday morning that 42 people were still being treated for injuries, including two people in critical condition. One of them is a 4-year-old child, who was transported to a hospital for treatment.

Ardern said many of the victims are migrants and refugees.

The Canterbury District Health Board confirmed that 48 patients are currently being treated at Christchurch Hospital, ranging in age from children to adults, some with critical injuries. People with gunshot wounds are also being treated at other hospitals.

Those killed and wounded in the mass shooting came from all over the world, officials said Friday. At least three Bangladeshis were killed in the attack and four others were injured, Bangladesh’s honorary consul in Auckland told the Associated Press. Two of the four people injured are in critical condition.

At least two people from Indonesia, a father and son, were injured in the shooting, the AP reports. Also injured were at least three Turkish citizens and four Pakistanis, according to the AP.

Survivors of the attack described a gunman wearing army-style clothing spraying the mosque with bullets. Noor Hamzah, 54, who was inside the Al Noor Mosque when the shooting began, described running for his life and hiding in the mosque’s parking lot with several other worshippers, the New Zealand Herald reports.

Sabbir Hussain, who was inside the Linwood Masjid, said he hid in a bathroom and closet before jumping out a window to hide until police arrived, reports stuff.co.nz.

The team’s batsman Tamil Iqbal Khan tweeted about the incident.

Facebook, YouTube and other social media companies struggled to block and delete footage of the shooting, after the suspect streamed the massacre on Facebook Live for approximately 17 minutes. New Zealand Police urged people not to view any “extremely distressing footage” being circulated online, and confirmed that authorities are working to remove any footage from the Internet.

“Police is aware there are distressing materials related to this event circulating widely online. We would urge anyone who has been affected by seeing these materials to seek appropriate support,” New Zealand Police said on Twitter.

Leaders in New Zealand responded by condemning extremism and violence, while defending diversity and the rights of immigrants in the country.

“There will be grief-stricken city, but we will come back from this, and we will continue our path of welcoming people from all nations, from all religions, from all cultures to our city,” Christchurch Mayor Lianne Dalziel said at a press conference on Saturday. “At every single citizenship ceremony that I run every month, I always say to people — because I know that some people have to give up their citizenship of birth to become a citizen of New Zealand — and I always say, you give up nothing of the place where you were born, you don’t give up your religion, your culture, your history, your language. You bring all of them with you. You nurture them in your children, and our community is strengthened by that diversity coming here. We will welcome people to our city always.”

Ardern said that New Zealand was targeted because of its diversity, but that the nation will not abandon its values in the face of tragedy:

Other leaders joined Ardern in denouncing the shooting. “I condemn the violent, extremist, right-wing terrorist attack that has stolen the lives of so many innocent New Zealanders as they went about their peaceful practice of worship at their mosques in Christchurch today,” said Australian Prime Minister Scott Morrison on Twitter.

Police have asked Christchurch residents to stay at home, and called for the closure of mosques across the country. “We have asked all mosques nationally to shut their doors, and advise that people refrain from visiting,” the New Zealand Police said on Twitter.

The country’s national security threat level has been raised from low to high, according to the Associated Press.

Politicians and leaders worldwide have joined Ardern in denouncing the shooting and expressing support for New Zealand. Australian Prime Minister Scott Morrison condemned the attack in a tweet.

Queen Elizabeth II, who is New Zealand’s head of state, sent a message saying she is “saddened by the appalling events in Christchurch today. Prince Philip and I send out condolences to the families and friends of those who have lost their lives.”

New York Gov. Andrew Cuomo has directed the Mario Cuomo Bridge, the Kosciuszko Bridge and the spire on the One World Trade Center to be lit in blue and red to stand in “solidarity with the people of New Zealand and the Muslim community,” NBC News reports.

Write to Amy Gunia at amy.gunia@time.com, Mahita Gajanan at mahita.gajanan@time.com and Katie Reilly at Katie.Reilly@time.com. 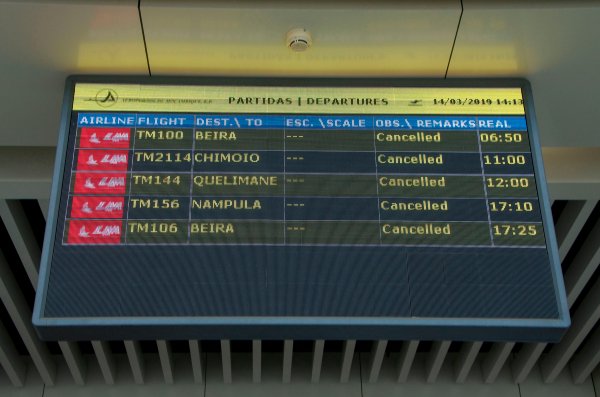 Mozambique Braces for Cyclone Idai Landfall
Next Up: Editor's Pick