News that President Donald Trump is interested in buying Greenland prompted mockery on Thursday when it was first reported by the Wall Street Journal.

But it wouldn’t be the first time a President has sought to buy Arctic land from another country: In 1867, President Andrew Johnson bought Alaska from Russia for $7.2 million.

It wouldn’t even be the first time the U.S. has tried to bag Greenland. Back in 1946, officials offered Denmark $100 million in gold bars for the world’s largest island, a Danish autonomous territory. U.S. officials at the time thought it was a “military necessity.”

That 1946 offer was supposed to be a secret. (It was only widely revealed in 1991, when declassified documents were discovered by a Danish newspaper.) But in 1947, TIME caught a whiff of similar plans.

A map from the Jan. 27, 1947 issue of TIME, illustrating the strategic advantage to the U.S. of acquiring Greenland
R.M.Chapin, Jr./TIME

“This week, as U.S. strategists studied the azimuthal map of the Arctic,” TIME’s Jan. 27, 1947 issue reads, “Washington military men thought this might be as good a time as any to buy Greenland, if they could.”

The article is accompanied by a map titled “Arctic Circles,” which shows concentric circles emanating from both Alaska and Greenland––emphasizing Greenland’s proximity to European capitals including Moscow.

There was no word of the classified $100 million offer made by U.S. officials a year earlier, but TIME suggested that “military men” had considered writing off Denmark’s $70 million debt in return for Greenland.

The news came at a time of insecure postwar peace. The U.S. had emerged from the Second World War victorious, but the Cold War was already brewing. Tensions with the Soviet Union were out in the open, including over U.S. presence in the Arctic. “So long as U.S. servicemen—even radio beacon operators and weathermen—remain at Greenland outposts, the U.S. is exposed to verbal sniping from Moscow for ‘keeping troops on foreign soil,’” TIME noted.

Buying Greenland, the piece went on, would be the best way to solve that problem. It would also win the U.S. a substantial military advantage:

The strategic concerns mentioned in the 1947 TIME article might not be too distant from those on Trump’s mind. But there is one important exception: today, as sea ice recedes thanks to global warming, the once-icebound Arctic is rapidly emerging as a potential new sea route for trade vessels and warships.

“Steady reductions in sea ice are opening new passageways and new opportunities for trade,” Trump’s Secretary of State Mike Pompeo said in May. “This could potentially slash the time it takes to travel between Asia and the West by as much as 20 days. Arctic sea lanes could [become] the 21st century Suez and Panama Canals.”

But as students of history will know, that means the area around Greenland could also become the site of a 21st century political crisis. 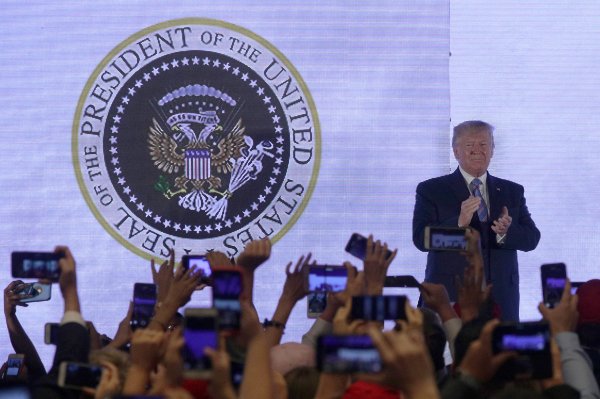 The Guy Who Designed the Fake Presidential Seal That Appeared Behind Trump Is a Former Republican
Next Up: Editor's Pick