A Massive Iceberg Is Threatening to Destroy a Village in Greenland

An 11-million-ton iceberg has lodged dangerously close to a tiny coastal village in Greenland. If it breaks apart, enormous waves generated by the falling ice could wash away parts of the town.

For the 169 residents of Innaarsuit, their fate may depend entirely on the weather. Strong winds could dislodge the iceberg and send it harmlessly out to sea. But enough rain could make the iceberg more likely to break apart, potentially generating destructive waves.

At 650 feet wide and rising nearly 300 feet above sea level, according to the New York Times, the iceberg is the biggest many residents of Innaarsuit have ever seen.

“We are very concerned and are afraid,” Karl Petersen, chair for the local council in Innaarsuit, told the Canadian Broadcasting Corp.

Thirty three people have been evacuated inland to higher ground, while others have been told to move their boats away from the iceberg, reported the Washington Post.

Especially worrying is the fact that Innaarsuit’s power plant is on the coast. Massive waves or rising water could shut off power for the entire village.

Relatively isolated, Innaarsuit is located about 600 miles north of Nuuk, the capital of Greenland. The town is most easily accessible by boat or helicopter, and most of the residents are hunters and fishermen.

“We can feel the concern among the residents,” Susanna Eliasson, a member of the village council, told the CBC. “We are used to big icebergs, but we haven’t seen such a big one before.”

A Danish Royal Navy ship is standing by should the villagers need assistance, reported the CBC.

For now, the residents of Innaarsuit can do little else but wait and watch the weather. The future of their town may depend on the forecast. 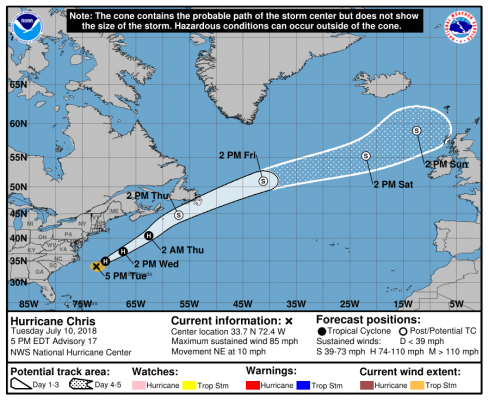 Hurricane Chris' Path and Forecast
Next Up: Editor's Pick