Country Music Should Be Political. After All, It Always Has Been

The distinctive American music has always reflected the complicated lives of the people who make it.
Brent Humphreys
By Jon Meacham and Tim McGraw

He was falling apart. Brilliant and tortured, devout and driven, Johnny Cash had been discovered in the Memphis of Sun Records–the musical milieu that gave America Elvis Presley–and had built a career that, by the late 1960s, he seemed determined to destroy through an addiction to pills. Lost in a fog of speed and drink, Cash missed shows and was exiled from the Grand Ole Opry in Nashville after he kicked out the footlights of the stage at the fabled Ryman Auditorium. His first marriage in tatters, Cash was in love with June Carter, of country music’s iconic Carter Family, but June refused to marry him until he sobered up. At last, June and her parents isolated Cash at his house near Nashville to dry him out and get him right.

After white-knuckling his way to sobriety, Cash accepted a January 1968 gig at Folsom State Prison in California, the setting for his legendary “Folsom Prison Blues.” “I knew this was it,” Cash recalled, “my chance to make up for all the times I messed up.” The men in the audience had suffered too, and Cash’s voice and experience formed an inherent connection between singer and convict. “The same guy who sang, ‘I shot a man in Reno just to watch him die’ sang ‘Were You There When They Crucified My Lord?’–in the same show,” Cash’s daughter Rosanne said. His music, like his life, was complex and contradictory.

As is America, which has always been the source material for the sound we know as country music. That point is a running theme of Ken Burns’ illuminating and engrossing new documentary, Country Music, which premieres Sept. 15 on PBS. Arguably the most influential interpreter of American history of the past three decades, Burns tells the story of the genre in his trademark style and, in so doing, makes it gracefully and implicitly clear that country music reflects not just red America but blue America too.

The music’s roots lie partly in the 1920s, a period like our own–with massive shifts in the economy, culture, population and media dividing the country into those who embraced the future and those who clung to the past. Tellingly, country music was marketed as a nostalgic product from the beginning–so-called old-time music even though it was quite new.

Such reminders are helpful at a moment when country is in the midst of a renewed debate over the nature of its sound and the related question of who counts as part of its club. Thanks to the success of hip-hop-inflected hits from Blanco Brown and Lil Nas X–whose “Old Town Road” has spent a record 19 weeks atop the Billboard charts–and the genre-bending performers Miranda Lambert and Maren Morris, the industry is undergoing a period of healthy redefinition and soul searching. In some ways, these questions are not so different from the ones the broader nation is asking itself in the age of Trump.

So, what is country? Or to put it more plainly, can a historically white ethos (in Burns’ film, Kris Kristofferson calls country “probably the white man’s soul music”) make room for the voices and visions of an increasingly diverse America? The answer, much like the music itself, is more complicated than even its fans tend to realize.

A nine-time Grammy winner, Parton is one of only a few women in country to achieve commercial success on par with male artists.
Kevin Winter—The LIFE Picture Collection/Getty Images

Debating what is country is a tradition nearly as old as country itself. In 1975, Waylon Jennings wrote “Are You Sure Hank Done It This Way,” which lamented the trend away from the kind of music Hank Williams created and toward a more polished, commercial sound. Charlie Rich would be banned from the now prime-time telecast CMA Awards for burning the envelope that declared pop superstar John Denver country music’s entertainer of the year, as he did in 1975. Whenever a generation puts less emphasis on the bedrock sounds of fiddle, acoustic guitar and steel guitar, the argument begins anew.

Country came not from the affluent and the accepted, but from the fringes of America–from the hills and hollows, from Sunday morning and Saturday night, from barrios and blues clubs. In Georgia in the 1920s–the state where a new Ku Klux Klan had been founded in 1915–“Fiddlin’ John” Carson gained popularity, his music resonating in a country that was rapidly urbanizing. Even people who had known only city life liked to indulge in reminiscence about simpler times.

One songwriter defined country music as “three chords and the truth,” but the editor of Variety in 1926 called country people “illiterate and ignorant … poor white trash … with the intelligence of morons.” Burns’ film, however, shows that the music and its makers and promoters were anything but ignorant or moronic–and they certainly weren’t simple. Carson, for instance, benefited from the rise of radio as a mass medium: WSB in Atlanta (call letters that stood for Welcome South, Brother) put him on the air, and together with a growing market for phonographic records, the twin technologies helped fuel the creation of what became known as the music business.

There it all was, even in the beginning: nostalgia and newness, sentiment and sales. Ralph Peer was a successful producer of what were called “race records” when he noticed Carson’s appeal. Before long, Peer had discovered both the Carter Family singers and Jimmie Rodgers, whom he recorded in a 24-hour period in Bristol, Tenn. The Carters’ music was rooted in gospel, the sounds of Sunday morning; Rodgers’ in the carousing world of Saturday night–thus setting up ongoing themes in a genre that touched on both redemption and sin.

Still, the ways country has been marketed from the start have obscured its other faces. Long considered the soundtrack of conservatism, country is in fact more complicated and more interesting than the prevailing caricature would have it. There’s always been a strain of protest alongside the sentimental patriotism. For all of the beer-swilling “We’ll put a boot in your ass/ It’s the American way” lyrics–see Toby Keith’s post-9/11 “Courtesy of the Red, White and Blue (The Angry American)”–there’s Cash defending prisoners or Native Americans and Loretta Lynn warning her man not to “come home a-drinkin’ with lovin’ on your mind” and touting the virtues of “The Pill,” an ode to a woman’s right to her own body that became a best seller despite being banned by many top radio stations. Country is not just about breaking hearts; it can be about opening them too.

If the themes of country have been more inclusive than many realize, the makeup of those who perform it has been far too narrow. To put it mildly, racial and ethnic diversity has been the rare exception in country rather than the rule. Blues and African-American gospel was an essential tributary for the genre as a whole, and there were early black musicians who played important roles. But pioneers like DeFord Bailey and stars like Charley Pride have long been a rarity in a field dominated by white men. The irony is thick: one of the greatest country songs in history, “Will the Circle Be Unbroken?,” began as an African-American spiritual.

There have been moments when it appeared the doors were opening wider. In the early 1960s, Ray Charles had a huge hit with his album Modern Sounds in Country and Western Music, which featured covers of country classics such as Hank Williams’ “Hey Good Lookin’,” the Everly Brothers’ “Bye Bye Love” and Don Gibson’s “I Can’t Stop Loving You.” As Willie Nelson put it, the pianist better known for rhythm and blues “did more for country music than any one artist has ever done.” Charles himself offered the longest of views. “You take country music, you take black music,” he said, and “you got the same goddamn thing exactly.”

More than half a century later, the rise of Lil Nas X and Blanco Brown offers a hopeful sign that in a world where all lines are blurring, broad audience acceptance of artists of color may be the next big front in country.

Perhaps country will also remedy the lack of commercial avenues for female artists. Despite legends like Lynn and Dolly Parton, you would be hard-pressed to find any decade where more than two or three female artists would be ranked by Billboard in the year-end top 10 artist rankings. The success of artists like Kacey Musgraves, who has built a major career and won multiple Grammy Awards by finding a way to connect to the fans without the filter of mainstream radio, points the way to a more equitable future.

The winner of the 2019 Album of the Year Grammy Award, Musgraves has built a following without the aid of mainstream radio.
Jeff Kravitz—FilmMagic/Getty Images

Things will always be changing in country music. That’s as it should be. We can embrace tradition, and we can embrace the more current sounds of the day–this is, after all, what our musical forebears did so brilliantly. At its heart, country is the music of inclusion and universality, and there must be an open door–and open ears and hearts–for artists who don’t look like Jimmie Rodgers or Hank Williams. Country is songs with stories for everyone, our life experience played out in 3½ minutes. Complexity is country’s friend, not its enemy, and more people need to realize that.

That includes matters of politics. Ever since the Dixie Chicks set off a fierce backlash in 2003 on the eve of the Iraq War when they said they were “ashamed” that George W. Bush was from Texas, artists have been, perhaps understandably, skittish about directly addressing politics in their music. To be true to its roots, though, musicians, like any other citizens, need to be forever open to speaking truth when the time seems right.

In this, as in many things, Johnny Cash shows us the way. In 1970, Richard Nixon invited Cash to perform at the White House. Ambivalent about the war in Vietnam, Cash nevertheless accepted the President’s offer. Then he learned that Nixon wanted him to sing “Welfare Cadillac,” a song that made fun of the poor. Cash refused and performed his “What Is Truth,” a meditation on the reasonableness of those questioning war and social conventions. Among the lyrics: “The old world’s wakin’ to a new born day”–which, to Cash, to country music broadly, and to the nation itself, is indeed an ancient and recurring truth. 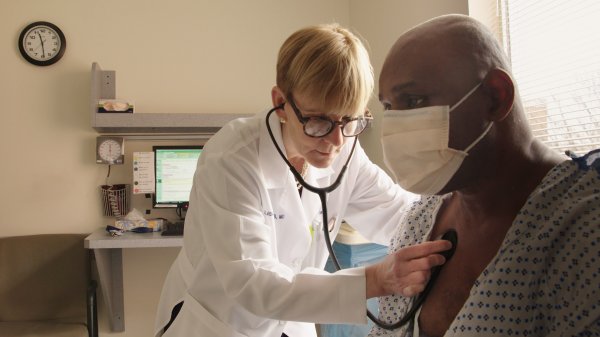 The Doctor Who Inspired House Navigates the Health Care Crisis in Netflix Docuseries Diagnosis
Next Up: Editor's Pick