The U.S. federal law that once saved the bald eagle from extinction is facing a new set of rollbacks by the Trump Administration, worrying conservation scientists about the future of at-risk species.

Signed into law in 1973 by President Richard Nixon, the Endangered Species Act (ESA) is credited with saving America’s national animal — as well as the California condor, grizzly bear, northern gray wolf, and more. Today it protects more than 1,600 plant and animal species and 99% of the species placed on the endangered list have not gone extinct, says Jeremy Bruskotter, a professor at the School of Environment and Natural Resources at Ohio State University.

Though roll backs to ESA implementations have been taking place since the act was established, on Monday the U.S. Fish and Wildlife Service (FWS) and the National Oceanic and Atmospheric Administration (NOAA) announced changes that could jeopardize already at-risk species — the government will now consider economic factors before categorizing a species as endangered or threatened. Experts say this is ridiculous. “Recovering species is a biological question, not an economic question,” says Leah Gerber, professor of conservation science and founding director of the Center for Biodiversity Outcomes at Arizona State University.

In another change, species categorized as “threatened” — just a category away from being listed as “endangered” — will no longer receive the same protections as species in the “endangered” category. Protections will instead be established on a case-by-case basis.

The Trump administration also announced it would define risks to species in the foreseeable future case-by-case, loosing the definition of “foreseeable future,” another change that worries conservation scientists like Gerber and Thomas Lovejoy, Senior Fellow of Biodiversity and Environmental Science at the United Nations Foundation, who say this is a way for the administration to ignore the effects of climate change on species survival.

Secretary of the Interior David Bernhardt said the goal for the changes is to bring the act “into the 21st century.” “The best way to uphold the Endangered Species Act is to do everything we can to ensure it remains effective in achieving its ultimate goal — recovery of our rarest species. The act’s effectiveness rests on clear, consistent and efficient implementation,” Bernhardt said in a public statement. “An effectively administered act ensures more resources can go where they will do the most good: on-the-ground conservation.”

But conservation scientists say the changes risk pushing more species to extinction. “The new rules completely undermine the strength of the ESA,” Gerber tells TIME. “The point of the act is to prevent extinction, this is going to do the opposite. It’s going to undermine efforts to recover species.”

The rules are set to take effect in September, but state Attorneys General of California and Massachusetts have already announced plans to sue the Trump Administration over the changes, and others are expected to follow. “Now is the time to strengthen our planet’s biodiversity, not to destroy it,” California Attorney General Xavier Becerra said in a public statement.

The changes come just weeks after the United Nations and International Union for Conservation of Nature published two separate reports on how climate change and human activity are pushing up to 1 million species closer to extinction.

Here’s what we know about the new rules.

How will the changes impact at-risk species?

After the rule change, species at-risk will be analyzed on a case-by-case basis. The new rules are not retroactive, meaning protections in place for the species already listed as endangered and threatened will not change.

“The details of how this works out on a case-by-case basis will really show us what this means going forward, but there are some concerns from the conservation community,” says Jon Beckmann, conservation scientist at the Wildlife Conservation Society. Beckmann, who has worked in conservation of grizzly bears and other endangered species, tells TIME there’s uncertainty going forward over how difficult it might be to classify a species as endangered or threatened, and what protections can be established to recover species that do end up on the list.

Conservation scientists say the ESA is the most powerful piece of environmental legislation in the U.S. “The worry that the act is ineffective or needs revision I think needs to be considered in the context of, yes, it could be more effective, but weakening it will not make it more effective,” Gerber says, adding that what could make the act more effective would be providing further funding. Gerber’s research shows that the government is only funding 20% of what is needed to save endangered species.

“But despite that, the act has been remarkably effective in preventing extinction,” Gerber says. “And I attribute that to the success of the act.”

A brief history of the Endangered Species Act

The Endangered Species Act, signed into law by President Nixon in 1973, replaced two existing laws, the Endangered Species Preservation Act of 1966, and the Endangered Species Conservation Act of 1969. In a letter to Congress on February 8, 1972, Nixon wrote, “It has only been in recent years that efforts have been undertaken to list and protect those species of animals whose continued existence is in jeopardy…We have already found, however, that even the most recent act to protect endangered species, which dates only from 1969, simply does not provide the kind of management tools needed to act early enough to save a vanishing species.”

The Senate passed the bill unanimously and the House passed it 390 to 12.

Since it’s passing, the act has been rather uncontroversial — Jeremy Bruskotter at Ohio State University helped conduct a study of public opinion on the act and found that 4 out of 5 Americans support the ESA, which is inline with support from earlier polls dating back to 1996.

The first time the ESA faced controversy was in 1978, when construction of the Tellico Dam in Tennessee was stopped after the Supreme Court decided construction was in violation of the ESA. Later, 1979, Congress made an exception for the dam by adding a rider into an appropriations bill.

Since then attempts have been made to alter the ESA, for example the Obama Administration made it more difficult for citizens to petition process to list a species as endangered.

Major milestones for species saved along the way

Tourists are greeted by a friendly grey whale whilst whale watching in San Ignacio Lagoon, Mexico. These affectionate whales are almost certainly the most friendly in the world. The good-natured seafaring giants will swim right up to human visitors, who can dip their faces into the sea to plant a kiss on the heads of the huge 40-ton sea mammals.
Barcroft—Barcroft Media via Getty Images

The first major success after the passing of the ESA was the delisting of the bald eagle as an endangered species and added to the threatened list in 1995. The eagle was later removed from the threatened list in 2007. Scientists found out the extreme population decline was a result of the use of a pesticide DDT, along with deforestation and illegal shooting.

About 55 species have recovered after being placed on the endangered species list. Another major success was the reintroduction of grey wolves to Yellowstone National Park in 1995. Other recovered species include humpback whales, gray whales, Louisiana black bears, three types of Kangaroo, American alligators and several plant species. 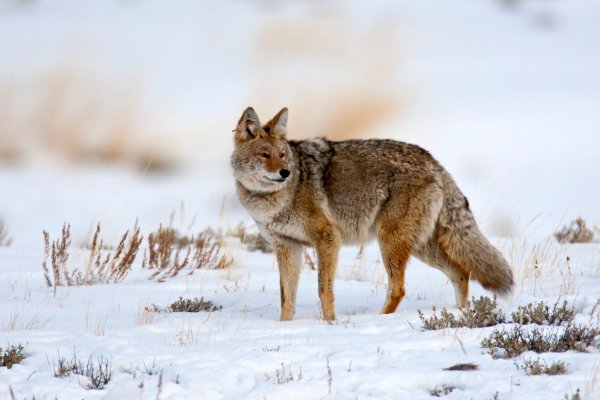 The Trump Administration Just Reversed Its Decision to Use ‘Cyanide Bombs’ to Kill Coyotes and Dogs
Next Up: Editor's Pick