A Coyote in Yellowstone National Park in 2009.
Getty Images
By Madeleine Carlisle

The Trump Administration has withdrawn its decision to re-authorize the use of so-called “cyanide bombs”—which potentially kill thousands of coyotes, foxes and feral dogs in an effort to protect private livestock herds—amid opposition to the practice.

The EPA had opened a public comment period running between the end of 2018 and March, and per the EPA’s own summary, “The overwhelming majority of comments from the general public, including the more than 20,0000 letters from the [Center for Biological Diversity] write-in campaign, did not support the continued registration of sodium cyanide predacide uses.”

In a press release announcing the reversal, EPA Administrator Andrew Wheeler said, “This issue warrants further analysis and additional discussions by EPA with the registrants of [sodium cyanide].” Besides the United States Department of Agriculture, Montana, New Mexico, South Dakota, Texas and Wyoming are registered to use the cyanide traps.

“I look forward to continuing this dialogue to ensure U.S. livestock remain well-protected from dangerous predators” while also reducing the harm to humans and non-predatory animals, Wheeler continued.

“I’m thrilled that the EPA just reversed its wrongheaded decision to reauthorize deadly cyanide traps,” said Collette Adkins, carnivore conservation director at the Center for Biological Diversity, in a statement. “So many people expressed their outrage, and the EPA seems to be listening.”

What is a cyanide bomb?

Known as “M-44s”, the spring-loaded traps are covered with bait and release sodium cyanide into the mouths of animals that bite down, killing them. They are placed on public lands by the U.S. Department of Agriculture’s Wildlife Services, whose mission is help resolve wildlife damage and reduce threats to human health and safety –– as well as state agencies in South Dakota, Montana, New Mexico, and Texas.

According to an analysis of the Wildlife Service’s data the Center for Biological Diversity and the Western Environmental Law Center, M-44 traps killed 6,579 animals in 2018 and 13,232 animals in 2017. In 2017, more than 200 animals were killed accidentally, including raccoons, opossums and a bear.

The “cyanide bombs” are making headlines now, but their use began long before the Trump Administration. According to the Center for Biological Diversity, in 2016 under the Obama Administration, M-44s killed 13,530 animals, and 321 of those deaths were non-target animals including family dogs and a black bear.

Why are cyanide bombs controversial?

In 2017, the traps ignited controversy after an M-44 in Idaho injured a young boy and killed his dog. His family sued the government for more than $150,000.

At the end of 2018, the Environmental Protection Agency made a proposal reauthorizing the use of M-44s, and opened a public comment period. “An overwhelming majority” of the 20,000 public comments opposed the traps, but the EPA’s review of its reauthorization last week also mentioned comments from rancher groups that cited the economic losses they could face if predators attacked their livestock or poultry.

Oregon and Colorado have temporarily banned the cyanide traps, and according to the Center for Biological Diversity, Wildlife Services in Wyoming settled a lawsuit to limit the traps’ use on Aug. 8. These decisions come after increasing pressure from environmentalist groups that argue the traps needlessly kill animals that pose no threat to livestock and are ineffective at warding off predators.

The EPA’s original reauthorization had updated the restrictions around the placement of M-44, requiring everyone living within half a mile of the trap be notified and moving the traps farther away from public roads with closer signs.

“When you kill the animal it’s just a band-aid because another animal is going to move in, it’s just an ongoing cycle of death,” she says. 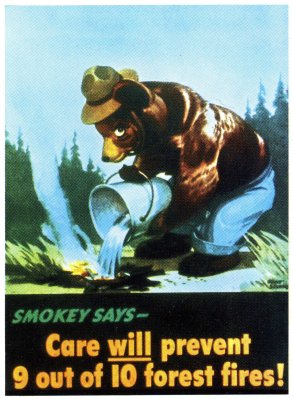 How a World War II Attack Helped Spark the Creation of Smokey Bear
Next Up: Editor's Pick