The U.N. Reports That 1 Million Species Could Go Extinct. It Shows How Hard It Will Be to Heal the Planet

There’s an awful lot of awful in the just-released summary of a new U.N. report on biodiversity and ecosystem. There’s the tenfold increase in plastic pollution since 1980, for example. There’s the 400 million tons of heavy metals, toxic sludge and fertilizer runoff poured into the world’s water each year too. There’s the doubling of greenhouse gas emissions since 1980; the growth of industrial fishing, now sprawling across 55% of the world’s oceans, the 85% loss of the wetlands since the dawn of the industrial era, and the 70% increase in invasive species in 21 countries.

And then, finally, and perhaps most worrying are the extinctions. According to the conclusions of the 455 experts and contributing authors from 50 countries who drafted the report for the Intergovernmental Science-Policy Platform on Biodiversity and Ecosystem Services (IPBES), up to 1 million species of plants and animals are now threatened with extinction, some within decades, including 40% of all amphibians, 33% of marine mammals, and another 33% of shark, shark relatives and reef-forming corals.

“Ecosystems, species, wild populations, local varieties and breeds of domesticated plants and animals are shrinking, deteriorating or vanishing,” said Professor Josef Settele, who co-chaired the panel that produced the report, in a statement. “The essential, interconnected web of life on Earth is getting smaller and increasingly frayed.”

The report comes at a very bad time, for a number of reasons. For one thing, the deadlines for the Aichi Biodiversity Targets, a series of 20 environmental goals to be met by 2020, are approaching. The targets, established by the U.N.’s Convention on Biodiversity, at a 2011 gathering in Aichi, Japan, include halving natural habitat loss, managing fish and aquatic plant stocks sustainably, controlling invasive species and integrating biodiversity measures into economic development plans. According to the report, meaningful progress has been made on only four of the goals; none is likely to be achieved by next year.

Worse, while the Aichi agreements and other international environmental accords like the 1997 Kyoto Protocol and the 2015 Paris Agreement at least represent a global consensus on environmental aspirations, even that now seems beyond reach—especially after the U.S., under President Donald Trump, withdrew from the Paris pact in 2017. IPBES Chair Sir Robert Watson stresses in the report that it is not too late to reverse environmental decline, “but only if we start now at every level from local to global.”

The “local to global” idea is more than just a slogan; it’s central to the kind of paradigm shift that is essential for stabilizing the ecosystem, the report argues. Runoff, freshwater conservation, landscape planning and fisheries management, after all, recognize no political boundaries—to say nothing of atmospheric emissions or plastic pollution, which follows ocean currents and turns up in fish and seafood.

Jane Goodall, the renowned primatologist and conservationist, said in a statement Monday that she and other scientists have been warning about about these dire consequences for years: “Today’s U.N. report provides a stark warning––we humans are threatening all life on Planet Earth with extinction: up to 1 million plant and animal species are at risk and many may disappear within decades.”

She added: “Every species has a role to play in the tapestry of life and if we do not protect this biodiversity, if we continue over-consuming and wasting natural resources, the tapestry will gradually fall apart.”

What’s more, globalization and what the authors call “telecoupling” have made it easier and easier for resources to be extracted in one part of the world for use in another. That has long been a pattern in the global economy, of course, with oil, diamonds, timber and other goods and commodities pumped, mined and harvested from poorer countries in order to enrich already wealthy ones. But with 60 billion tons of resources extracted globally each year, the economic pain of such an unequal system—which was felt mostly in the developing world—is being eclipsed by environmental pain felt by the entire world.

Technology, said report co-chair Eduardo S. Brondízio, “in some cases has lowered and in other cases increased the damage to nature.”

There is little hyperventilating in the tone or the details of the report, which makes the findings, stripped of emotion or hyperbole, more frightening. The authors acknowledge that climate and ecosystem degradation are not exclusively the function of a current, uniquely destructive era. Native species have declined by 20% since 1900—though the loss has accelerated in recent decades. What’s more, the authors note, the loss of 680 known vertebrate species stretches all the way back to the 16th century—or more than 200 years before the industrial era.

But our highly mechanized, automated global economy—not to mention a human population that has more than doubled from 3.5 billion to 7.2 billion since 1900—has dramatically increased our destructive throw-weight.

Smartly, the authors of the IPBES report thus took care to include a population not usually considered closely in surveys like this, but a population that has a lot to teach the rest of us: the Indigenous Peoples. Like all groups, of course, Indigenous Peoples leave their mark on the land, but it’s a lighter mark left by a gentler touch. About 25% of the global land mass is controlled by indigenous groups, and that land, the authors write, “is under increasing pressure, but is generally declining less rapidly than in other lands.”

Getting humanity out of its current environmental hole, requires giving those better stewards of the land a bigger role in establishing policy. “Regional and global scenarios,” the authors write, “would benefit from an explicit consideration of the views, perspectives and rights of Indigenous Peoples . . . their knowledge and understanding of large regions and ecosystems, and their desired future development pathways.”

The industrialized populations that made our current mess can’t count on the less industrialized ones to clean it up. It’s already certain that too many species are not going to survive the reign of the humans. We can’t heal the planet quickly, easily or cheaply—but we can at least resolve to begin. 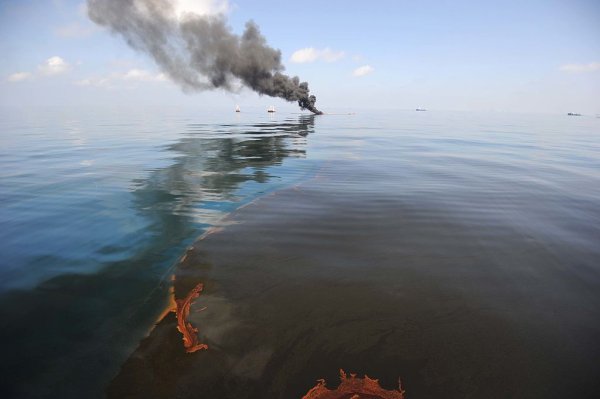 Trump Admin Rolling Back Offshore-Drilling Regulations
Next Up: Editor's Pick