As many fans of The OA know, series co-creator Brit Marling took to Instagram on Aug. 5 to confirm that Netflix had cancelled the show after a two-season run. However, some people are convinced that the whole cancellation is part of an elaborate publicity stunt that Netflix, Marling and co-creator Zal Batmanglij are all in on.

“Some of you may know already or some of you may be learning from this letter that Netflix will not be continuing The OA,” Marling wrote. “Zal and I are deeply sad not to finish this story. The first time I heard the news I had a good cry. So did one one of our executives at Netflix who has been with us since the early days when we were sketching out Hap’s basement on the floor of our production office in Queens. It’s been an intense journey for everyone who worked on and cared about this story.”

The most popular cancellation fan theory rests on the idea that the show not getting picked up for a third season is intended to play into the second season twist in which the OA (Original Angel, played by Marling), Hap (Jason Isaacs), and either Homer (Emory Cohen), Steve (Patrick Gibson), or both travel to a dimension in which The OA is being filmed — a.k.a. one either exactly or much like our own.

The final minutes of the season 2 finale see the OA rise into the air as Hap’s animatronic robots perform the Movements in one dimension and BBA (Phyllis Smith) and the boys perform them at the same location in another. But as Karim (Kingsley Ben-Adir) watches the OA’s ascent through the mysterious rose window of the house on Nob Hill, a bird flies through the portal and knocks the OA into a dimension where she’s an actor named Brit Marling who has just fallen and hit her head on the set of a show called The OA. Very meta stuff.

Now, some fans are speculating that if the cancellation really is a ruse, it could be a way for Marling, Batmanglij and Netflix to drum up even more excitement for the third season than there already was.

“We have now truly moved into the third season where the show was cancelled due to Brit (OA) being injured, and not being able to continue her role as OA,” one Reddit user posited. “Due to the show being cancelled Hap has a way to help repress Nina and OA inside of Brit, by saying she just misses the character and acting on the show. Jason Isaacs (Hap) is pushing for the show to continue so that he seems like a caring husband, thus adding more doubt to Brit’s mind, the rest remains to be seen.”

Fans have also latched on to both the phrasing of Netflix’s statement about the cancellation as well as the streaming service’s lack of an official press release.

“We are incredibly proud of the 16 mesmerizing chapters of The OA, and are grateful to Brit and Zal for sharing their audacious vision and for realizing it through their incredible artistry,” Cindy Holland, Netflix’s vice president of original content, said. “We look forward to working with them again in the future, in this and perhaps many other dimensions.”

Many other dimensions indeed. No matter what the truth is, it’s clear that fans of The OA have learned the importance of leaving doors open.

Seasons 1 and 2 of The OA are currently available to stream on Netflix. 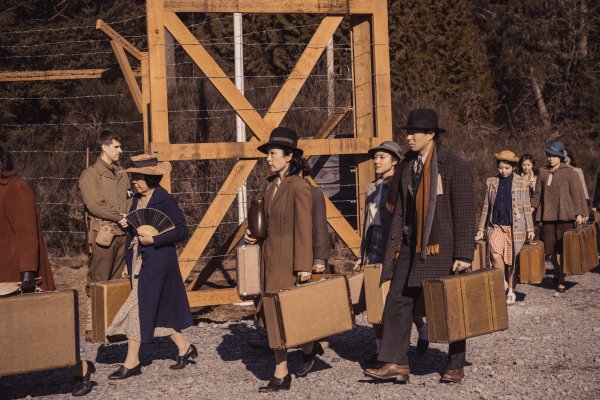 The Terror: Infamy Is a Step Forward for Depictions of Japanese-American Internment
Next Up: Editor's Pick