Warning: This story contains spoilers for The OA season 2.

When it premiered in 2016, Netflix’s ambitious mystery series The OA explored the eery possibility of hopscotching between dimensions. At the dreamy center of the show, co-created by Brit Marling and Zal Batmanglij, is a character known as the original angel (the OA, played by Marling), who is fixated on the idea of crossing a “border that’s hard to define,” a goal for which she recruits a team of hardcore-believer, misfit companions. By the time we reach the curtain dropper of The OA Season 2, the show has taken that indefinable border and made it crystal clear.

By season’s end, we understand the endgame of Hap a.k.a. Dr. Percy (Jason Isaacs), the reason why Michelle Vu (Ian Alexander) disappeared, and the unique powers of BBA (Phyllis Smith).

In one particularly playful twist, the OA and Dr. Percy seem to make it all the way to our — the viewer’s — world, where The OA is being filmed. The breaking of the fourth wall sets the table for a fascinating potential third season.

If you’re looking to have The OA ending explained, you’ve come to the right place. Here are four key revelations from the season finale.

BBA’s special powers are put to the test

The final episode merges two parallel dimensions on a level that only a medium like BBA can feel. It opens on BBA, Buck, Steve and the rest of the core crew descending on the (abandoned) Treasure Island mental hospital. BBA notes that over in another dimension, the OA is with them and she senses her every move.

At the same exact time, the OA opts to embrace the persona of a cigarette-toting Nina Azarova, sporting a white power suit and speaking with a full-fledged Russian accent.

Let’s call the functional hospital where the OA visits Dr. Percy dimension 2, and the abandoned hospital dimension the kids are exploring dimension 1.

OA goes to Treasure Island to see Dr. Percy. Evidently, she needs him as much as he has always needed her.   “I was burying Nina. You were right,” she tells Dr. Roberts when he collects her from the lobby. Here, we see that she’s “integrating” with Nina’s consciousness, a feat she was only able to achieve after confronting her trauma by drowning herself in the bathtub. This. Woman.  What a brave little toaster.

After many failed attempts, the OA successfully gets Homer (Emory Cohen) to remember their time together in the dimension where they met  . As soon as the OA leans in to kiss Dr. Roberts goodbye and join Dr. Percy, the memories of their shared ache for freedom in Hap’s underground prison jolt into focus for him. Dr. Roberts unlocks Homer’s memories, allowing him to see Nina for the first time as the OA.

When OA places her hand on the glass elevator door between them, he finally gets it. She wasn’t crazy. They were prisoners together.

Bonus: He recognizes Dr. Percy as Hap, his captor, so he knows this meeting can’t be good.

Homer finally sees the OA through the elevator glass for who she is.
Nicola Goode/Netflix

In the following scene, which takes place in Dr. Percy’s office, we find out the genesis of Q Symphony. Nina’s boyfriend Pierre Ruskin’s (Vincent Kartheiser) addictive augmented reality game, which lures savvy kids to a mysterious house for crowdsourcing purposes, all began during therapy with Dr. Percy. Previously, Nina persuaded Ruskin to hire an expert to help them crack the mystery of the house on Nob Hill. Before Nina can continue to scold him about how dangerous it all is for the game players, he says, “The house is a lot more than that.”

That’s when Hap escorts her to the section of the hospital that doubles as a creepy evil genius lab. Here, we get a look at what he’s been up to this whole time, and it’s not pretty.

Welcome to the saddest ever pool party for teens. Here, Hap is keeping French, Scott and Steve and a few other teens we first met in Season 1, who lay comatose in a pool where they’re sprouting flowers from their brains. The “invisible river” is Dr. Percy’s big breakthrough after much time studying inter-dimensional travel. Together, the bodies are his map, because they contain every possible reality.

And it comes with one hell of a perk. By eating the petals plucked from these flowers, Percy can preview the dimension to which he’s about to journey before he “jumps” to it. Dr. Percy tries to convince OA the setup is copacetic because the kids are all living their best lives in alternate dimensions. Naturally, she does not approve.

As for Dr. Percy’s new destination? He’s going to a place where he and the OA are just a couple of lovebirds. In this zone, she apparently “remembers” his evildoing, but she doesn’t believe his exploitative actions actually happened.

Outside, the massive mechanical robot cubes go to work on the five movements to initiate the leap from dimension 2 to our world. In dimension 1, BBA and company bust moves of their own from the same spot. Despite an altercation that ends with Percy shooting Homer, they appear to all travel together to our world.

The Big Season 2 twist: filming The OA TV show in our world

Leave it to a visionary like Brit Marling to write herself into the show.

On her journey, the OA rises above the Golden Gate Bridge looking like a luminescent angel. Peak OA. Then a bird breaks through the rose-tinted window and the magic that lifted OA high into the air is gone. Karim (Kingsley Ben-Adir) catches all of this from his view inside the house on Nob Hill.

The OA crashes down to the floor into the set of the show itself, which looks a lot like our world, fully engaging in the idea that fantasy can cross the border to reality.

Dr. Percy is quick to learn that Prairie is really “Brit” here, and soon after, he identifies himself as Jason Isaacs. She’s seriously injured, and he rides with her in the ambulance after saying she’s his wife.

But Steve finally catches up to ambulance. And from the look in his eyes when he says hello to Hap, it’s highly possible this is simply Homer’s consciousness talking in Steve’s body.

Karim plays a significant role in The OA
Nicola Goode/Netflix

We learn that Michelle went missing when she “solved” the puzzle. We know this because the footage on Nina’s USB drive shows her collapsing at the rose-tinted window, seemingly jumping into another dimension.

After Karim peers across dimensions through the infamous window, he spots Buck — who is Michelle — stumbling onto the set. He immediately screams “Michelle!” and they climb the ladder to the window in response. Just touching Karim’s hand is enough to wake Michelle from her comatose state back in his dimension.

We learn early on that Pierre was looking for cheap labor to figure out how the mysterious San Francisco mansion worked. (It wasn’t ethical.) The final episodes of Season 2 confirm this. The poisonous gas underneath the house where the game players crashed is real, and it can be dangerous.

And this one time at dream camp....somehow, Karim is key to the story.
Nicola Goode/Netflix

The rose-tinted window the other recruits dreamed about in Ruskin’s labratory is a portal through which people can finally see other dimensions, if they’re willing to.   It looks like Karim did just that. And in the grand dream lab experiment, the kids imagined four things, including a coffin-like tunnel, a curved double-sided staircase and a rose-tinted window. But Dr. Marlow Rhodes (Liz Carr) never mentions the fourth vision Ruskin told Karim about: the face of a man who looks exactly like Karim.   Is the hard-boiled private detective some kind of a shepherd between worlds?

Whatever the case, there are more than enough questions about The OA to answer in a potential third installment. 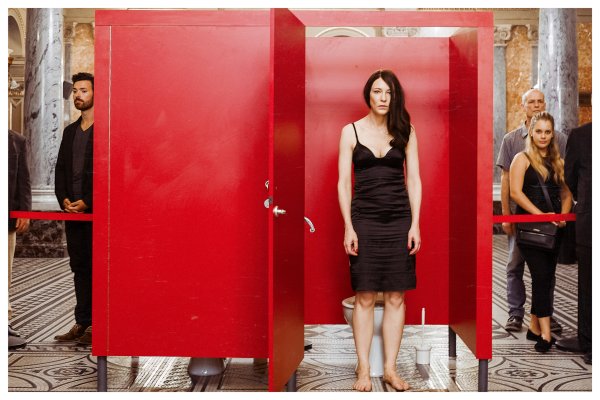