As people across the country consider taking safety precautions following mass shootings in El Paso, Texas, Dayton, Ohio and Gilroy, Calif., the sales of bulletproof backpacks have increased between 200-300% at some manufacturers, according to CNN.

Three bulletproof backpack retailers, Guard Dog Security, TuffyPacks and Bullet Blocker, told CNN sales typically increase after every mass shooting. Bullet Block founder Joe Curran said sales of the backpacks have increased 200%, while TuffyPacks, which specializes in bulletproof shields that can be inserted into a backpack, told CNN and the TODAY Show that the retailer had seen a 200-300% increase in sales following the shootings. TuffyPacks CEO Steve Naremore also said 95% percent of customers are parents.

“It’s sad that we have to even consider a product like this, but it’s the issue that we have to deal with now and hopefully we won’t in the future,” Naremore told the TODAY Show on Tuesday.

The backpacks sell from about $120 to $490, and inserts range from $129 to $149. Some backpacks have started selling at retailers like Home Depot. Some people, including Ohio state Representative Casey Weinstein, said they’ve started to see advertisements for the backpacks. “My eldest daughter starts Kindergarten next week. This is from an ad we saw for a bulletproof backpack. THIS. MUST. STOP. #dosomething,” he wrote on Twitter.

One El Paso mom told PBS News Hour that her husband, a police officer, purchased a bullet proof backpack for their 8-year-old son.

Some advertisements, including by Guard Dog Security, depict school mass shootings, though the products are not capable of withstanding rifle and assault weapon ammunition, according to CNN.

Other politicians have chimed into the ongoing controversy surrounding the backpacks, including presidential candidate Kamala Harris. “Your back-to-school shopping list shouldn’t have to include a bulletproof backpack,” she wrote on Twitter. 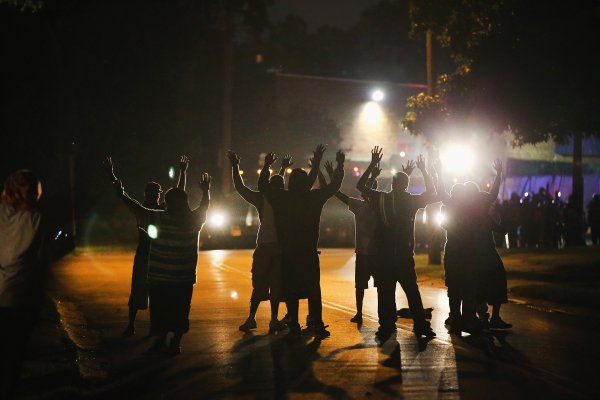 How Ferguson Woke Us Up
Next Up: Editor's Pick