On Saturday, a 21-year-old white supremacist walked into a Walmart in my hometown of El Paso and opened fire. Witnesses say he walked in calmly, confidently, as if “on a mission.” He drove about 650 miles from the Dallas area to carry out an act of terrorism; so far, 22 have died and over two dozen are injured. A rambling essay published on 8chan shortly before the massacre, which investigators believe he authored, described “a response to the Hispanic invasion of Texas” and “defending my country from cultural and ethnic replacement brought on by an invasion.”

Invasion. We’ve heard this trope used repeatedly in the past few years, particularly around election time by the GOP. A mid-term campaign ad for Texas Congressman Pete Sessions proclaimed that Border Patrol agents “consider the [Central American] caravan an ‘invasion.’” CNN reports that President Trump’s reelection campaign has paid for over 2,000 Facebook ads warning Americans that an “invasion” threatened the nation. When Fox News’ Laura Ingraham spoke to Texas Lt. Governor Dan Patrick last month, she told him that Texas is “completely overrun by this illegal invasion” and said “calling it anything but an invasion at this point is just not being honest with people.” He agreed.

Yet the belief that was drawn on by the author of that manifesto — that Mexicans are outsiders to Texas — goes back much further than the last few years. The El Paso massacre is not an aberration. It is the predictable outcome of 200 years of a white supremacist idea’s growth in this state.

In the late 1990s, I taught Texas history at the University of Texas at San Antonio. Each semester I made the drive downtown to sit outside the Alamo, that iconic symbol of the Texan fight for “liberty.” Once I heard a white woman tell her family, “This is where we beat those wetbacks.” Generations of Mexican-American children have been traumatized through the teaching of a historical narrative that doesn’t veer too much from this Alamo visitor’s version of history. History tells us a much different story.

Mexico gained independence from Spain in 1821. At the time the boundary between the U.S. and the new country was blurry—but Texas, like large swaths of the American West and Southwest, was part of Mexico. The region was populated largely by Native Americans, but the new Mexican government actively worked to recruit settlers, some Spanish-speaking and some English-speaking Anglo transplants from the U.S. These immigrants to Mexico were at first welcomed, seen as a boon to the Mexican economy, but eventually—in part because many of them were unhappy about Mexico’s desire to extend its ban on slavery to Texas—they began to make trouble. That trouble turned into the revolution during which Texan soldiers, fighting within what was then the country of Mexico, occupied the Alamo.

So when Texas declared its independence as a republic in 1836, it did so without recognition from either Mexico or the United States. Mexican Texans who had long lived in the area quickly became the targets of newcomer Americans who used violence to displace people and to take land. For example, Juan Seguin, the son of a powerful Mexican family who had fought on the side of Texas independence and served as mayor of San Antonio during the period of the Republic of Texas, had to leave his beloved Texas in 1842 because of death threats from newly-arrived white Americans. In his biography, he lamented that he was treated like a foreigner in his own land.

When Texas became a state in 1845, attacks on Mexican-origin people as not belonging in Texas had already been hurled for decades. When the U.S.-Mexico War followed, the treaty that ended it guaranteed those who lived in the area — specifically including those of Mexican descent — the opportunity to become American citizens. But statehood and citizenship did not change the trend of discrimination.

A century ago, Texas Rangers joined by local vigilantes massacred 15 Texans of Mexican descent in Presidio County, a four-hour drive from El Paso. The murdered included men and boys. Their families took their bodies across the river into Mexico to be buried out of fear for their own lives.

In the 1910s, postcards showing Texas Rangers mounted on horses with dead Mexican Texas on the ground were sold as souvenirs. The murders became the stuff of Texas lore. Years ago, a professor of mine told me a joke common among his parents’ generation in South Texas: “Did you know that all Texas Rangers have Mexican blood?” The answer: “On their boots.”

The El Paso massacre occurred during the centennial of a significant investigation into the massacres of Texas Mexicans. In 1919, attorney and state legislator Tomas J. Canales initiated an investigation of the Texas Rangers for the murders of thousands of Texas Mexicans by Texas Rangers and vigilantes. At the time he was the only Mexican-American legislator in Texas. He received death threats.

The idea that some people don’t belong in Texas is as old as the state, but its real history shows that prejudice against those of Mexican descent is not about whether they come from somewhere else. It has never really mattered who was there first, who has the legal right to be there or who is a new arrival in Texas — a state founded by Mexican people whose descendants have been characterized as “foreigners” in the land that had long been theirs. What does matter is what we do with that knowledge.

Yolanda Leyva is Director of the Institute of Oral History, Director of the Liberal Arts Honors Program and Associate Professor of History at the University of Texas at El Paso. 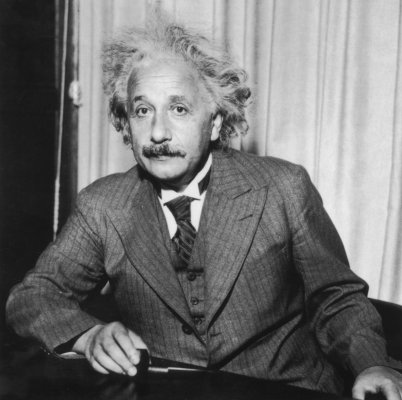 Einstein Feared a Nazi Atom Bomb—But Immigrants Made Sure the U.S. Got There First
Next Up: Editor's Pick