'I Just Have to Quit Equinox.' Fitness Instructors and Influencers Are Furious Over a Trump Fundraiser

When Bec Donlan, an Instagram fitness influencer who teaches a strength training class at a New York Equinox, learned about a Trump campaign fundraiser being held by a billionaire with ties to the gym, she felt “disgusted.”

“As an immigrant myself, who is loving living here and wouldn’t want to live anywhere else, it just kind of irks me and makes my stomach turn,” Donlan, who moved to the United States from Australia in 2012, tells TIME. She immediately shared the news with her more-than-57,000 Instagram followers. “This is not okay,” she wrote.

Donlan was one of several Equinox employees and fitness influencers taken aback when news broke Wednesday that Stephen M. Ross, chairman and founder of The Related Companies, which acquired Equinox in 2005 and is now a minority shareholder, is planning to host a Trump campaign fundraiser at his Hamptons home on Friday. Tickets to the event cost $100,000 for lunch and a photo-op with President Trump. A $250,000 ticket includes a “roundtable discussion,” the Washington Post reports. Guests will include Commerce Secretary Wilbur Ross, Treasury Secretary Steven Mnuchin and White House senior adviser Jared Kushner, according to invitations obtained by the Post.

Fitness influencers are now among the loudest voices in a growing social media movement urging people to boycott Equinox and its subsidiaries, including SoulCycle, Pure Yoga and Blink Fitness, following the fundraiser revelation. Those involved in the boycott calls are critical of Trump’s record on LGBTQ issues, his anti-immigrant rhetoric, and racist comments. Major celebrities, including Chrissy Teigen and Billy Eichner, are also urging their followers to reconsider their memberships over the fundraiser. Other companies have also faced boycott threats over their involvement with Trump and his associates; luxury retailer Nordstrom dropped Ivanka Trump’s clothing line following a similar movement in 2017.

Equinox is a privately held company, making it difficult to fully assess its financial relationship with Ross, who is also principal owner of the NFL’s Miami Dolphins. As Axios notes, “there is no publicly-available indication that Equinox or SoulCycle pay dividends or other profit cuts to Ross, although obviously he’d benefit financially were either company to be sold.”

In statements released Wednesday, Equinox and SoulCycle attempted to quell the controversy by calling Ross a “passive investor.” “Many members raised their concerns about a political fundraiser taking place later this week,” reads Equinox’s statement. “We want to let you know that Equinox and SoulCycle have nothing to do with the event and do not support it.” In a separate statement, SoulCycle CEO Melanie Whelan said that the company believes in “diversity, inclusion, and equality.”

But instructors like Jimmy Burgio, who has taught yoga classes at both Equinox and Pure Yoga in different cities over the last five years, are having none of it. He says he was so upset by Ross’ relationship with Trump, who he views as anti-LGBTQ, that he quit his current position at a Chicago-area Equinox.

“As a queer person of color — I’m a Mexican-American, my mom is from Mexico — I feel like there is often so little I actually can do,” Burgio tells TIME. “My gut instinct right away was like, ‘I just have to quit Equinox.'”

Burgio announced his departure from Equinox with an Instagram post on Wednesday. As of Thursday afternoon, the post has received more than 4,300 likes, along with supportive comments from others in the fitness community — and no shortage of rainbow and heart emojis. “You are courageous and I support you,” reads one comment. “Thank you for standing up and making personal sacrifices for what is right and just for all.”

While Equinox and the related brands are trying to distance themselves from Ross, Burgio says he can’t shake the concern that the work he does for the company will wind up generating money for the billionaire. “And he’s spending that money to throw a fabulous fundraiser for the Trump administration,” Burgio says. He adds that other instructors have told him they might quit, too.

The social media furor over Ross’ Trump fundraiser comes as Equinox and SoulCycle have been working to help instructors better connect with their online followers. Last summer, the brands announced the creation of an in-house firm to support their growing cache of instructors with huge followings on Instagram. “Our instructors are the heartbeat of our tribe,” said Whelan in a 2018 press release. “They act as motivational coaches, and the strong bonds they develop with our riders create transformational energy inside our studios.”

Some members also say they’re headed out the door. Jessica Shyba, who runs the popular parenting account and blog “MommasGoneCity,” says she will not purchase new classes for her usual SoulCycle studio in the California Bay Area. A picture she shared with her 432,000 Instagram followers featured her on an outdoor bike in lieu of her usual spin class.

“It actually makes me feel like I can do something. It’s not something I’m just sitting around wringing my hands over,” Shyba tells TIME. “There’s no alignment with my values, and I can’t continue to support them as such.”

Sentiment like that stands to be particularly damaging for Equinox and SoulCycle, both of which have embraced the LGBTQ communities. Burgio himself has taught several Pride-themed Equinox classes, along with many LGBT and nonwhite peers. But learning about Ross’ political ties made him feel like there was “cognitive dissonance between what the company was presenting outwardly and then behind closed doors, what was actually going on,” he says.

Shyba, meanwhile, says she was excited when her SoulCycle studio was one of the few storefronts in her town decorated for Pride Month this past June. Her hope is that the company will cut ties with Ross. If that happens, she says, she would happily rejoin the spinning studio. But in the meanwhile, she says, “you really have to speak with your dollar.”

The original version of the story misstated that Jessica Shyba had cancelled her SoulCycle membership. Shyba is planning to stop purchasing classes; the ones she bought previously will soon expire. SoulCycle does not offer memberships. 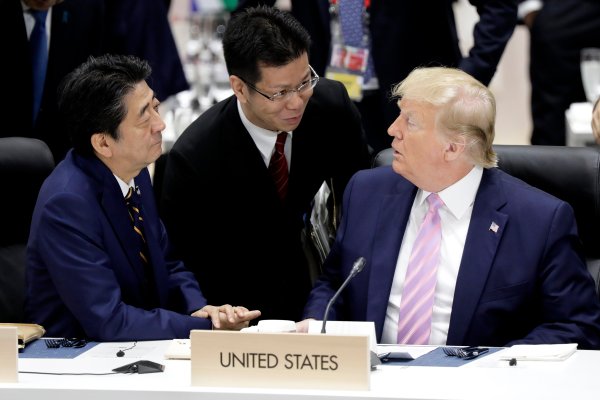 President Trump Wants a Weaker Dollar. But He Keeps Accidentally Pumping Up the Value
Next Up: Editor's Pick