The body of a woman believed to be a missing British scientist was discovered on the Greek island of Ikaria on Wednesday, just a month after an American scientist was murdered on another Greek island and left in a bunker built by Nazis during World War II.

Although authorities would not confirm any names, local media has identified the missing woman as 34-year-old British astrophysicist Natalie Christopher, who lived in Cyprus.

Volunteers found a woman’s body a little over half a mile from the house where she and her partner had been vacationing, says Theodore Chronopoulos, a press spokesman for the Hellenistic Police.

The Associated Press reported that Christopher was reported missing a few hours after she never returned from a morning run. Her partner told police that he spoke with her over the phone around 10 a.m., and later reported her absence around noon when she still was not back, Chronopoulos tells TIME.

The U.K. Foreign Office issued a statement confirming it is currently “assisting the family of a British woman reported missing in Ikaria, and are in contact with the Greek authorities who are conducting the search for her.”

The investigation is ongoing.

“The crucial element is that we wait for the coroner’s report in order to find the cause of death,” Chronopoulos says. He estimates a report will take two to three days.

Christopher’s disappearance comes only a month after 57-year-old American molecular biologist Suzanne Eaton was discovered on July 9, having died from asphyxiation in a case. On July 16 a local man confessed to raping and murdering Eaton after attacking her during her daily walk.

Eaton was in Greece for a scientific conference.

When asked if authorities thought the two disappearances might have any connection, Chronopoulos said the cases had “nothing” to do with each other, and continued, “we’re talking about two different incidents.” Crete and Ikaria are more than 124 miles apart.

Greece has become a popular vacation destination for both American and British citizens; according to the World Bank, over 27 million tourists visited Greece in 2017 alone. 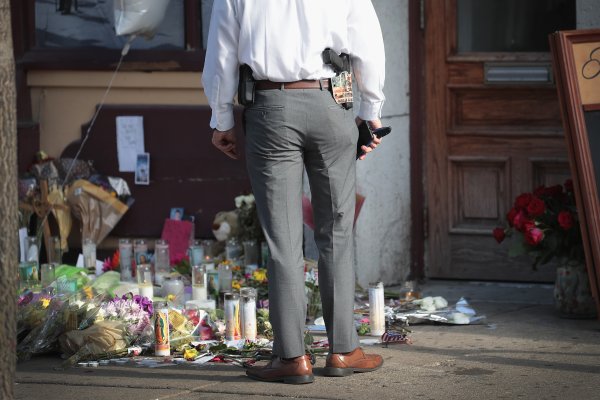 'Good Guys With Guns' Can Rarely Stop Mass Shootings
Next Up: Editor's Pick