The mayor of Dayton, Ohio, was underwhelmed by President Donald Trump’s response the day after a shooting claimed the lives of nine people on a Dayton street on Sunday.

Following a weekend in which 31 people were killed in mass shootings in Dayton and at a Walmart in El Paso, Texas, the President gave a wide-ranging speech in which he called for perpetrators of mass shootings and hate crimes to receive the death penalty, suggested reforming mental health laws and called for a crackdown on violent video games. Trump also expressed support for “red flag laws,” which would permit authorities to seize guns from people who are believed to be dangerous.

For Dayton Mayor Nan Whaley, however, these comments were just “unhelpful.” Whaley, a Democrat, told reporters on Tuesday that she plans to tell the president herself when he visits Dayton on Wednesday.

When a reporter expressed skepticism that she would criticize the President to his face, Whaley doubled down.

“If I’m telling you, I’m going to tell him,” Whaley said. She clarified that she wanted tell the President that “his comments weren’t very helpful to the issue around guns.”

Later on Tuesday, Trump confirmed that he intends to visit both El Paso and Dayton on Wednesday.

“Will be going to Dayton, Ohio and El Paso, Texas, tomorrow to meet with First Responders, Law Enforcement, and some of the victims of the terrible shootings,” the President tweeted.

Whaley also said that there was “absolutely not” enough being done on the federal level to combat gun violence.

“What do you see happening in D.C.? You see not a lot happening on a lot of stuff. And common sense gun reform is definitely an example where nothing’s happened,” Whaley said.

In Ohio, at least, there are signs that gun control efforts have gained momentum in the wake of the shooting. Republican Gov. Mike DeWine proposed a set of new gun control laws on Tuesday, including a law that would “allow courts to issue Safety Protection Orders which would remove firearms from potentially dangerous individuals,” institute background checks on all gun sales with limited exceptions and increased penalties for people violating gun laws, including felons who illegally possess firearms.

It remains to be seen whether the laws will actually move forward. Republicans control both the house and the senate in Ohio’s legislature, and the chambers have been reluctant to pass gun control measures in the past.

It wasn’t the first time this week that Whaley took a jab at Trump. On Monday, when asked about the President visiting she joked about how she wasn’t positive that Trump would actually come to Dayton, referencing how the President identified the stricken city as “Toledo” during his speech.

“I’ve heard that [President Trump’s] coming Wednesday but I have not gotten a call. And you know he might be going to Toledo, I don’t know,” Whaley said. 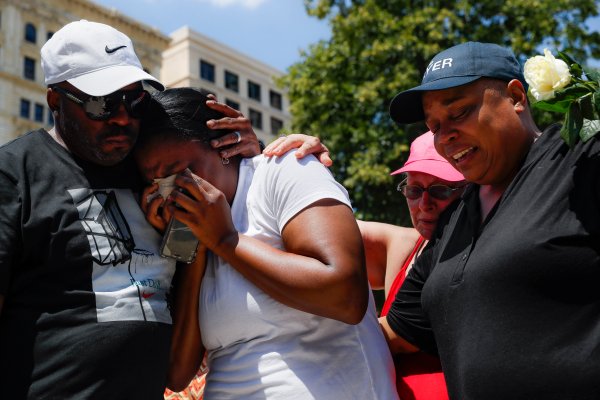 What to Know About the Dayton, Ohio, Shooting Victims
Next Up: Editor's Pick