'It’s Not a Museum. It’s Not a Mausoleum.' Columbine High School Could Be Torn Down As Safety Threats Mount

More than 20 years after 13 people were killed in a shooting at Columbine High School, officials are considering tearing down the building they say has served “as a macabre source of inspiration and motivation” for future school shooters. And some Columbine survivors say they agree it might be time for that change.

In a letter to the community on Thursday, Jefferson County Public Schools Superintendent Jason Glass said the number of people trying to trespass on Columbine property or enter the school illegally has increased to “record levels” in the past year. “Most of them are there to satisfy curiosity or a macabre, but harmless, interest in the school. For a small group of others, there is a potential intent to do harm,” he wrote.

More than 150 strangers show up at the school each month, the Washington Post reported earlier this year. In April, just before the 20-year anniversary of the shooting, an 18-year-old woman alleged to have an “infatuation” with Columbine forced schools around Denver to shut down when she flew to Colorado and purchased a shotgun and ammunition. She was later found dead by suicide.

Kiki Leyba, who was a first-year teacher when the shooting occurred in 1999 and has been at Columbine ever since, says he would welcome a new building after dealing with frequent safety threats at the school.

“It would be so nice to simply focus on learning as opposed to dealing with threats or just the touristy traffic and people wanting to stop by and take pictures or people wandering in, wondering if they can walk around,” Leyba says. “It’s a school. And for a lot of people, it has memories, but it’s not a museum. It’s not a mausoleum. It’s a school. It’s a place of learning.”

But after 20 years, he says it’s also difficult to imagine going to work in a new space.

“I think a lot of the people that are very emotional about it, they’re not there that often, and of course I understand their memories are associated with it. We all have those,” he says. “But it’s really our community that has created the whole vibe of Columbine. It has so little to do with the building. I’m completely confident that if we were in a new facility, that all the tradition and spirit and everything we associate with the existing school, it will continue.”

In many ways, the Columbine shooting changed how school leaders and law enforcement officers across the country respond to active shooters, how they discuss mental health issues and implement school security measures. Columbine survivors have become resources to other communities dealing with mass shootings and unintended experts on school safety and trauma. But Columbine High School could now follow the lead of other communities that have torn down buildings in the wake of school shootings.

Sandy Hook Elementary School in Newtown, Conn., — where 20 children and six adults were killed in 2012 — was torn down and rebuilt at the same site. Marjory Stoneman Douglas High School plans to demolish the building where 17 people were killed last year. After the Virginia Tech shooting in 2007, there were discussions about whether to tear down Norris Hall, where most of the violence occurred. But the university ultimately decided to renovate and reopen the space, which is now the location of the school’s Center for Peace Studies and Violence Prevention.

“In 1999, no guidance existed on what to do with a building such as Columbine High School. Today school safety experts recommend tearing down buildings where school shootings take place,” Glass wrote in his letter on Thursday. “Since the morbid fascination with Columbine has been increasing over the years, rather than dissipating, we believe it is time for our community to consider this option for the existing Columbine building.”

It is often a challenge for communities to figure out how to appropriately remember a tragic event without encouraging “dark tourism” or inducing further trauma, says Timothy Marr, an associate professor of American Studies at the University of North Carolina at Chapel Hill who teaches about how sites of tragedy are remembered and memorialized in the United States.

“I think that’s the problem of destroying, demolishing the site of tragedy — there’s still the event that occurred there that exists on other registers of recollection,” Marr says. “We can’t, nor should we, ultimately forget these sites of violence, but how do we remember them in ways that don’t continue to cause trauma in some way?”

Columbine High School currently has a nearby memorial featuring remembrances about the victims and a wall of quotations from community members. The school’s former library, where 10 students were killed, was torn down shortly after the shooting and transformed into an atrium, and families of the victims raised money to build the Hope Library in another part of the school.

Glass said the district is considering constructing the new school near the existing location, preserving the Hope Library by making it the cornerstone of the new building, and retaining the name Columbine High School. They are exploring a plan to pay for the building by raising $60 to $70 million with a potential new property tax.

In 1999, Laura Farber was a freshman sitting in the cafeteria when gunshots rang out at Columbine High, sending her and other students fleeing outside. She recently directed We Are Columbine, a documentary film that brought her back inside the school for the first time since her high school graduation in 2002.

She says she’s torn, thinking about the school being demolished. She initially worried that tearing down the school would be like erasing what happened there, but she also feels for students and teachers who continue to deal with security threats.

“Part of me thinks it might be time,” Farber says. “My thought is more on the people who actually go to school and teach there every day, and I think we’re holding on to an attachment of something that isn’t serving the current staff and students and community because of all the hype around the school.”

If the school does get torn down, Farber says she would like Columbine survivors and family members of victims to have a chance to visit the building once more — something that was a big part of her own healing process.

“At the end of the day, it is just cement,” she says. “Keep the people and the spirit of the school. I don’t think you can erase that.” 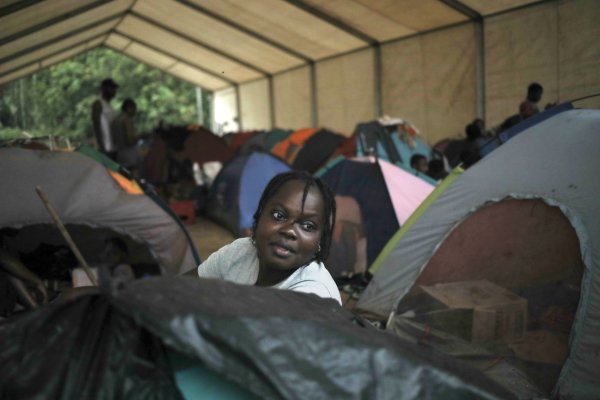 'Dramatic Rise' in African Migrants Arriving at U.S. Border
Next Up: Editor's Pick