Demonstrators gather during a rally organized by civil servants at Chater Garden in the Central district of Hong Kong on Aug. 2, 2019.
Justin Chin—Bloomberg/Getty Images
By TIME Staff

The staid two-hour gathering at a garden in the heart of the financial district reflects just how far the sustained demonstrations have reverberated across Hong Kong. Beyond prompting teenage protesters to take to the streets, discontent over the city’s governance has flared even among usually apolitical sectors of society, and further polarized establishment and pro-democracy camps.

On Friday evening, it was clear that many within the administration are unimpressed by their bosses’ handling of the snowballing political crisis. To chants of “add oil”—the protesters’ mantra of encouragement—bureaucrats and civil servants ended the work week by shuffling into Chater Garden, which was the site of a flash mob by financial workers the previous night.

“I’ve seen a lot of unfairness over the past two months, I’m very unsatisfied with how the government and police have handled things,” says an official from Hong Kong’s Food and Environmental Hygiene Department who gave her name as Kat.

The gathering under spitting evening skies risked blowback from the city’s embattled leaders, who have already warned of possible retribution against wayward administrators.

Before the civil servants assembled, the government sought to dampen turnout by calling on “the principle of political neutrality.”

“Civil servants should be dedicated; be committed to the rule of law, objectivity and impartiality; and at all times ensure that their behaviour would not impede their performance of official duties in a fair and professional manner,” the Hong Kong government said in a statement Thursday.

According to the civil servant’s code of conduct, government staffers are required to be loyal to the city’s administration and not take part in political events that could be construed as a conflict of interests.

The neutrality appeal was to little avail, however. As the event started, the train station emptying into the garden quickly devolved into a crush of people trying to join the rally. Demonstrators spilled into nearby roads and out into the surrounding area. “Loyalty is earned not imposed,” read one of the signboards.

Chants for Hong Kong leader Carrie Lam to step down rang out across the crowd.

“I think many civil servants in different departments are unhappy about the situation, namely about how this has become a ‘lame duck’ administration,” says Willy Lam, an adjunct professor at the Chinese University of Hong Kong’s Center for China Studies. “So this has precipitated an unease and explains this unprecedented phenomenon of civil servants coming out in rallies whose purpose [is] to put pressure on Carrie Lam.”

Hong Kong’s Beijing-backed leader has come under mounting pressure to restore calm to the city, which has increasingly been the scene of tear gas-strewn battles between protesters and police. On Wednesday, the Chinese military released a video depicting soldiers quelling protesters in a drill that was seen a thinly veiled warning to the city’s authorities: end the unrest, or we will.

But the protests show no sign of abating. A series of demonstrations are planned for the weekend, and next Monday, a general strike threatens to grind the city to a halt.

The sustained protests, which are set to enter a ninth consecutive week, have posed one of the greatest popular challenges to the Communist Party’s control.

What began as a protest against a now-suspended extradition bill has since spiraled into a movement demanding greater democracy. Many in Hong Kong, a former British colony which retroceded to China in 1997, are now openly rebelling against Beijing’s authority over their semi-autonomous enclave, and calling for self-determination.

Last week, a group of 100 administrative officers reportedly endorsed the growing call for an independent investigation into various incidents around the protests, including the police response and a mob attack at a train station on July 21.

In an open letter, the officers slammed the government for turning a deaf ear on the public and “sugarcoating instead of admitting the problem.”

“Facing the immediate political crisis, we feel the obligation to voice out in a bid to guard the Government’s credibility and respectability,” the letter said.

Even the usually more pro-establishment Hong Kong Law Society spoke out on Thursday, issuing a statement in support of an independent inquiry.

Danny Kwok, a 42-year-old IT technician who joined the civil servant’s rally Friday, said the addition of these officials could be a tipping point for the protest movement.

“I’m not a civil servant, but I think it’s very important that I and everyone here comes out to this rally,” he says. “Civil servants have the most power in Hong Kong to put pressure on the government.”

— With reporting by Hillary Leung and Abhishyant Kidangoor / Hong Kong 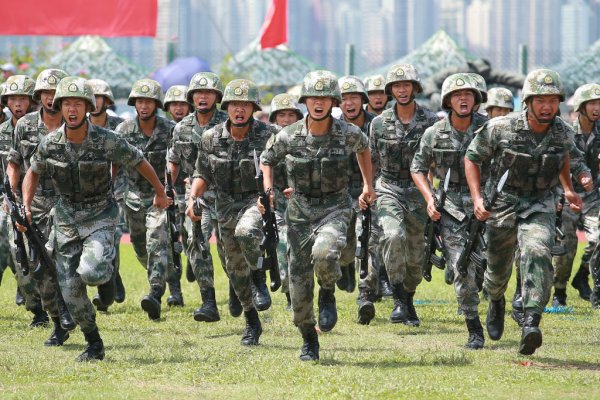