Speaking during a press conference in the afternoon, Yang Guang of the Hong Kong and Macau Affairs Office (HKMAO) said “We hope that the people of Hong Kong, from all walks of life, can oppose this riotous behavior.”

He attacked the “small number of radical protestors” who “have seriously damaged Hong Kong’s reputation and challenged Hong Kong’s rule of law” and stressed that the Hong Kong government and police force had Beijing’s full backing.

“We are confident that with the full support of the central government and the mainland … our Hong Kong compatriots will be able to govern, develop and manage Hong Kong well, and Hong Kong will overcome the difficulties and challenges going forward,” he said.

It is the first time that the office has held a press conference since the former British colony was retroceded to Chinese sovereignty in 1997, indicating the seriousness with which Beijing views the territory’s political crisis.

The remarks came just hours after communist mouthpiece the People’s Daily warned that Hong Kong’s “bright future” lay in its “being backed by the motherland.”

The weeks of continued protests were originally sparked by a now suspended Hong Kong government bill that would have allowed the extradition of fugitives to mainland China for the first time. Critics fear such a provision would be used to apprehend dissidents and political opponents.

The demonstrations have since evolved into a push for greater democracy and a rebellion against Chinese sovereignty itself. Many demonstrators are calling for self-determination.

At least 40 people were injured over the weekend, the Hospital Authority confirmed, and 49 arrested at the protest in the western district. On Friday, hundreds of demonstrators staged a peaceful sit-in at the city’s international airport, chanting antipolice slogans.

Since the start of the unrest, China has repeatedly accused “foreign forces” of being behind the protests. In a press conference last Tuesday, Chinese Foreign Ministry spokeswoman Hua Chunying claimed to reporters in Beijing that there were “very obvious signs that foreign forces are manipulating, plotting and even organizing and implementing relevant actions” and accused the U.S. of being involved.

Last week, China’s defense ministry said the People’s Liberation Army would be able to intervene to “maintain social order” in Hong Kong if asked to do so. About 6,000 Chinese troops are based in the city.

As the crisis enters into its ninth week, the unrest shows no signs of winding down. Civil servants from various departments are scheduled to rally Friday to demand an independent investigation into the police handling of the protests. Demonstrations across Hong Kong are also planned for the coming weeks. 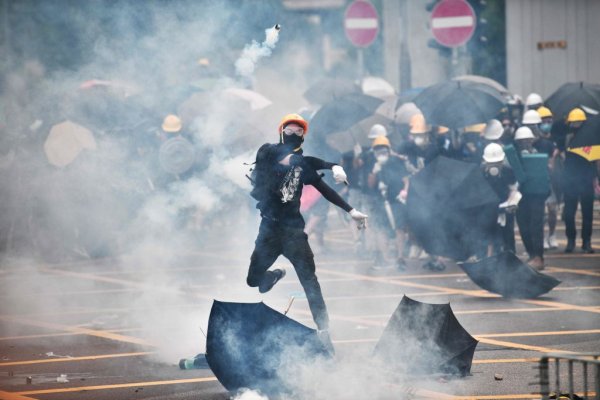 Hong Kong Protesters Face Off Against Police
Next Up: Editor's Pick