China’s military has released a video showing troops carrying out drills and cracking down on protestors in what appears to be a warning aimed at Hong Kong as the city approaches its ninth straight week of demonstrations.

The video was posted Wednesday by the People’s Liberation Army Hong Kong Garrison on Chinese microblogging platform Weibo. In the captions, the military declares support for the city’s Beijing-backed government, and emphasizes the army’s role in protecting Hong Kong’s stability.

In a shot eerily reminiscent of clashes at recent weekend protests, officers armed with body-length shields march forward and fire at fleeing protestors. The advancing officials hold up a red warning sign nearly identical to the one used by Hong Kong police that says “Stop Charging Or We Use Force.” At the end of the drill, arrested protesters are ushered toward detention sites.

The video increases fears that the Chinese military could send forces to quash the sustained protests in the semi-autonomous territory. Its release come amid escalating rhetoric from Beijing. Just last week, a spokesperson for the Chinese defense ministry said Beijing could stage an unprecedented intervention if the Hong Kong government sought its assistance.

The video was shown at a reception in Hong Kong to celebrate the 92nd anniversary of the People’s Liberation Army (PLA), according to Agence France-Presse. During a speech, Major-General Chen Daoxiang, the commander of the Hong Kong garrison, reportedly condemned the protesters for incidents that have “seriously threatened the life and safety of Hong Kong citizens.”

Hong Kong has hosted PLA troops since the territory’s 1997 handover from Britain to Beijing.

The political unrest flaring in the city this summer has posed arguably the greatest challenge to Chinese President Xi Jinping’s authority since he came to power seven years ago. What began as a backlash to a proposed extradition bill has since spiraled into a pro-democracy movement pushing back against Beijing’s sovereignty. While mostly peaceful, the protests have increasingly devolved into violent clashes between demonstrators and police.

In the vision presented by the PLA’s video, Hong Kong people praise the troops for their fine skills and discipline. “The PLA’s flight skills are excellent,” one man says, speaking in Cantonese rather than Mandarin, the official language on the mainland. The video ends with many, including schoolchildren, saying they are “very proud” of their country.

Taiwan’s Ministry of Foreign Affairs, which has expressed support for Hong Kong’s pro-democracy movement, slammed the video in a tweet that said it is “time for authoritarian China to back off.”

On LIHKG, a Reddit-like forum used by protestors, people mocked the video. “I’m too scared to go out,” one wrote. “Are you coming yet? I’m bored,” another said. 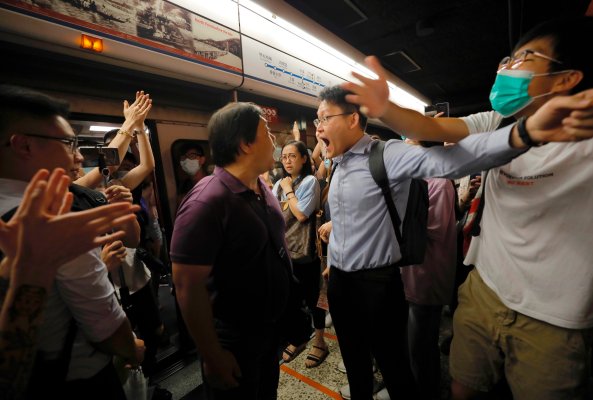