As he had promised, Robert Mueller’s testimony produced no new revelations outside the findings detailed in his final report. But through the former special counsel’s terse responses, both Democrats and Republicans were able to claim victory—reflecting the way partisan rancor has come to dominate the fallout from the independent investigation.

Mueller’s report outlined extraordinary details about the Russian influence operation during the 2016 election and its outreach to the Trump campaign, as well as numerous instances in which Trump may have obstructed justice by trying to hamper the probe. But many of those details were subsumed by Attorney General William Barr’s announcement that the investigation did not determine the Trump campaign conspired with Russia—Barr then determined that there was not sufficient evidence to establish that he did. Trump’s oft-repeated and inaccurate claim that the report was a “complete and total exoneration” for him also helped draw attention away from any damning details contained in the report.

While Mueller’s July 24 testimony allowed members of Congress to drill down into the details of the report in the most public forum yet, lawmakers from both parties were also frustrated by Mueller’s intractable refusal to go beyond the findings of his report, or even just read it out loud.

Democrats and Republicans chose to focus on very different themes in their questions. Democrats repeatedly tried to highlight the details of Trump’s possibly obstructive behavior and his campaign’s interactions with Russia, while Republicans tried to undercut Mueller’s credibility, painting him as a partisan with conflicts of interest, and question the origins of the investigation. Mueller provided short answers, often simply responding with a one-word answer— “yes,” “no,” “correct,”— or pointing the questioner back to the text of his report. This means that while Americans may finally have heard from the man behind the probe that has consumed the last two years, lawmakers from both parties were still allowed to fill in his silence with their own interpretations.

Former Special Counsel Robert Mueller is sworn in before the House Judiciary Committee in Washington, D.C., on July 24, 2019.
Gabriella Demczuk for TIME

There were some notable victories for the Democrats early in the day. Within five minutes of the Judiciary Committee hearing’s opening, before 9 a.m. on Wednesday, Democrats already achieved what they had been seeking for months: testimony from Mueller that his report did not vindicate the President. “Did you actually totally exonerate the president?” Chairman Jerrold Nadler, a Democrat from New York, asked Mueller. “No,” the former special counsel replied.

Democrats scored another win when Mueller confirmed to Rep. Ted Lieu, a Democrat from California, that the Department of Justice Office of Legal Counsel (OLC) regulation prohibiting an indictment of a sitting President was a factor in his decision not to charge Trump on obstruction. “I believe a reasonable person looking at these facts could conclude that all three elements of the crime of obstruction of justice have been met, and I would like to ask you the reason again that you did not indict Donald Trump is because of OLC opinion stating you cannot indict a sitting President, correct?” Lieu asked.

“That is correct,” Mueller replied.

Although Mueller had laid that line of reasoning out in the report, Democrats believed getting him to say it on national television was important for viewers. Trump had inaccurately tweeted “NO OBSTRUCTION!” as recently as that morning.

(Mueller later clarified before the House Intelligence Committee that he was not saying the OLC memo was the sole rationale for his decision not to charge the President. “As we say in the report and as I said in the opening,” Mueller added, “we did not reach a determination as to whether the President committed a crime.”)

Democrats expected Mueller would respond that way going in, but they felt simply drawing attention to the contents of the report played a valuable role. “Not everyone in America had read the entire report. Not everyone in America was really focused on what obstruction of justice is or what it means when the President of the United States takes certain actions to stop an investigation into his own behavior,” Rep. Ted Deutch, a Democrat from Florida, said after the Judiciary Committee hearing. “That’s what became clear to people today. That’s the takeaway.”

Republicans, however, seemed to gloat at the fact that there were no new revelations. “Democrats were far away from impeachment before today’s hearings,” said Arizona Rep. Andy Biggs, a Republican member on the committee. ”After today, I suspect they’re even further from approving that partisan action against Trump.”

Some Republicans used their time at the high-profile hearing trying to discredit the probe by pressing Mueller on how it began, even though he said in his opening statement that he would not be able to discuss it. Reps. Jim Jordan and Devin Nunes brought up Joseph Mifsud, the mysterious Maltese professor whose meeting with campaign aide George Papadopoulos about “dirt” the Russians had on Hillary Clinton prompted the FBI to look into the Trump campaign’s ties to Russia.

Mueller’s afternoon appearance before the House Intelligence committee was the first time he took questions from elected officials about what he found when investigating Russia’s interference in the core exercise of American democracy in 2016. In his opening statement, Mueller emphasized that the core of the investigation centered on a foreign power interfering in U.S. elections. “Over the course of my career, I’ve seen a number of challenges to our democracy,” Mueller said. “The Russian government’s effort to interfere in our election is among the most serious.” He then reiterated a call he made during the only other time he has spoken publicly about his investigation, on May 29, “This deserves the attention of every American.”

Former Special Counsel Robert Mueller is sworn in for his testimony before the House Judiciary Committee in Washington, D.C., on July 24, 2019.
Jim Watson—AFP/Getty Images

It was the issue of election security seemed to provoke the strongest reaction from the recalcitrant 74-year-old former FBI director. “It wasn’t a single attempt. They’re doing it as we sit here,” he said about foreign interference in U.S. elections. “And they expect to do it during the next campaign.”

Although Mueller’s report provided a detailed roadmap of vulnerabilities in the U.S. system exploited by Russia in 2016, lawmakers on Wednesday rarely used the opportunity to have him go deeper on the issue.

In recent weeks, Trump infuriated Democrats when he suggested he might not alert the FBI if foreign governments offered his campaign damaging information against his 2020 rivals in the next election cycle. Meanwhile, U.S. national security officials warn that little is being done to prevent the same thing from happening in 2020. In April, FBI director Christopher Wray warned that foreign adversaries would “keep adapting and upping their game” and that the agency is “very much viewing 2018 as just kind of a dress rehearsal for the big show in 2020.”

The closest Mueller came to criticizing the President was when Democratic Rep. Mike Quigley pointed to all of the times Trump had praised Wikileaks. Asked if those comments were disturbing, Mueller replied, “Problematic is an understatement.” He also acknowledged that he declined to subpoena the President for an interview in an effort to expedite the investigation, but also conceded that it was “generally” fair to say Trump was not always being truthful in his written answers.

But for Trump and his allies, this was an opportunity to attack Mueller during a rare moment in the spotlight, as he did not speak publicly and was rarely seen during his roughly two-year long investigation, and a time to try to put the investigation to bed before Trump’s re-election campaign heats up. “This entire spectacle has always been about the Democrats trying to undo the legitimate result of the 2016 election and today they again failed miserably,” Trump 2020 campaign manager Brad Parscale said in a statement after the hearings concluded. “Almost three years and tens of millions of dollars have been wasted on this witch hunt and it is now even more apparent that Democrats are completely consumed with their hatred of the President and their obsession with overturning the will of the people who elected him.”

Trump, who had a nearly empty schedule Wednesday, had told reporters on July 22 that he was “not going to be watching” Mueller’s testimony, before conceding, “Maybe I’ll see a little bit of it.” But if his Twitter feed was any indication, he was keeping up with the developments, and pushing the Republican narrative that the hearings were hurting the Democrats. “TRUTH IS A FORCE OF NATURE!” Trump tweeted shortly after the hearings ended. He then elaborated later in the afternoon to reporters assembled at the White House: “We had a very good day today,” Trump said.

For Democrats, this was also a crucial moment and a rare opportunity, given Mueller’s near silence up to this point and the Trump Administration’s success in blocking other high-profile witnesses from testifying publicly. “Today wasn’t about [Mueller], despite my colleagues on the other side of the aisles’ attempts to make it so,” Deutch said. “Today was about a lengthy investigation into the actions of the President of the United States, that had they been committed by anyone else in America, would have resulted in criminal charges.” Deutch said he expected the committee to move forward with a “series of hearings” in the fall with other witnesses after Mueller’s appearance.

Members of both parties understand the power of the moment. For many Americans, most of whom have not read Mueller’s report, the hearings were the first and only time they heard about what happened in 2016 directly from the man who spent nearly two years investigating it, and not through headlines, cable news or partisan talking heads. But ultimately, Mueller’s sparse testimony allowed lawmakers to filter it through their partisan lenses as he remained a laconic cipher at the center. After nearly seven hours of testimony, the question remains whether the facts Mueller uncovered will be able to break through the political conclusions surrounding them. 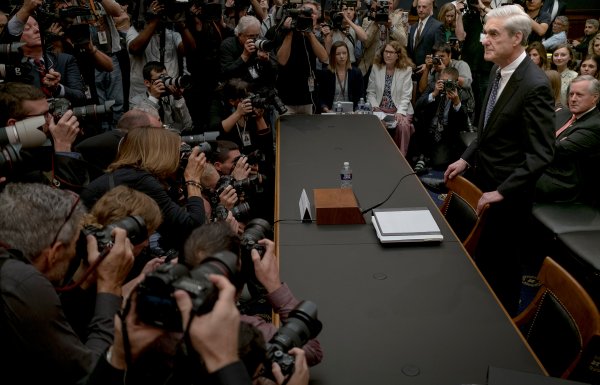 The Biggest Moments From Mueller's Testimony
Next Up: Editor's Pick