Your Summer Beach Trip Could Put You at Risk of Getting Sick. Here's What You Need to Know

A sunburn may not be the only health consequence of your summer beach trips and pool days. A study published last year estimated that recreational water activities are related to 90 million illnesses each year in the U.S., with swimming as one of the primary catalysts of water-borne respiratory, ear and skin infections.

Less frequently, according to federal data, pathogens found in pools, lakes, rivers and oceans can lead to more serious sickness, including gastrointestinal illnesses and—in very rare cases—exposure to flesh-eating bacteria. This month, for example, a Florida woman died from a flesh-eating bacterial infection after falling and scraping her leg on the beach.

While dramatic cases like that are very rare, swimming-related illnesses are in general not uncommon, says Dr. Seetha Lakshmi, an associate hospital epidemiologist at Tampa General Hospital and an assistant professor at University of South Florida Health. That’s especially true for pregnant women, young children and those who have compromised immune systems.

That said, anyone can get sick from water-borne illness. Here’s what you need to know before your next beach, pool or lake trip.

As recent U.S. Centers for Disease Control and Prevention (CDC) data show, swimming pools are a major driver of water-borne illnesses in the states. Chemically treated waters like pools are a common point of exposure to Cryptosporidium, a fecal parasite that can cause a gastrointestinal disease called cryptosporidiosis when ingested. Crypto outbreaks increased by about 13% each year from 2009 to 2017, the CDC reported. Swimming was responsible for more than half of Crypto-related illnesses during that time; other common causes include exposure to cattle or sick kids at childcare centers, the CDC says.

CDC data published last summer showed that untreated recreational waters were connected to 140 disease outbreaks that caused around 5,000 illnesses between 2000 and 2014. While oceans were included in this category, 84% of the outbreaks stemmed from lakes, ponds and reservoirs, the CDC found. In addition to Crypto, the CDC says these bodies of water can harbor other contagions including norovirus, E. coli and bacteria in the Shigella family, all of which can be spread through feces from swimmers or pollution, and can cause illnesses when ingested.

Lakshmi adds that freshwater can also be home to potentially dangerous amoeba, albeit very rarely. Since some of these, like Naegleria fowleri, can get into the brain when they enter the body through the nasal cavity, Lakshmi says cautious swimmers can use nose clips if they’re playing in fresh water. Brackish water—a mix of salt and fresh water, as in estuaries— may also occasionally be home to dangerous flesh-eating bacteria, Lakshmi adds, though these cases are extremely rare.

In its report last summer, the CDC warned that marine illnesses can come from algal blooms, amoeba and fecal pathogens. And a report published July 23 by environmental research and education group Environment America found that about 2,600 of roughly 4,500 U.S. beach sites analyzed clocked bacteria levels above Environmental Protection Agency (EPA) thresholds for safe swimming on at least one day in 2018. The report didn’t connect those test results to recorded disease rates, but the EPA estimates that when people swim in such waters, 32 out of every 1,000 are likely to get sick.

Perhaps unsurprisingly, the source of most of these dangerous pathogens is humans themselves: “The two biggest drivers of pollution at our beaches that can make people sick are runoff pollution and sewage overflow,” says report co-author John Rumpler, clean water director at Environment America. Runoff pollution happens when impervious surfaces such as roads and rooftops repel rainwater, causing it to flow away and pick up pollutants that can get into public waters, Rumpler explains. Rainwater can also get into sewage systems, contributing to overflows that can cause raw or partially treated sewage to flow into the ocean and other bodies of water, he says.

Metro areas can reduce these types of pollution by updating aging water infrastructure and designing with more forgiving surfaces—such as permeable pavements, rooftop gardens and green spaces—that can cut down on runoff pollution, Rumpler says. While individuals are much less directly responsible for this type of pollution, they can help by picking up pet waste and investing in eco-friendly solutions like rain barrels, which store excess storm water.

“We have a lot more work to do to ensure that all of our beaches are safe for swimming,” Rumpler says. “This is an opportunity for the nation to invest in water infrastructure that prevents pollution for that purpose.”

Swimmers looking to stay safe should check whether their local beach posts daily bacterial conditions, and consider postponing an outing if levels exceed EPA recommendations, Rumpler says. And in any scenario, Lakshmi says people should avoid swallowing water, and bandage and regularly clean wounds, cuts or scrapes to keep bacteria out. “If you have large cuts or wounds, having it properly covered and cleaned is of paramount importance to avoid any infection, in general,” she says. 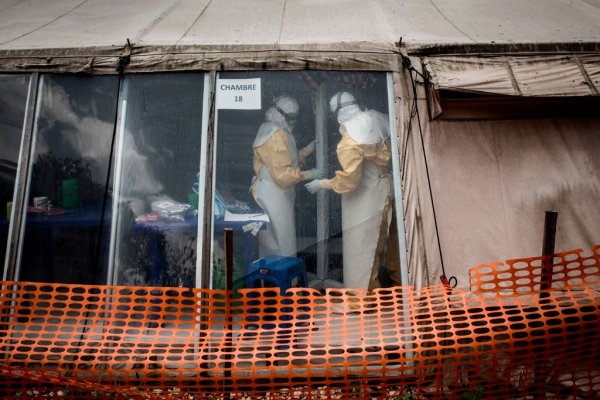 WHO Declares Ebola in Congo a Public-Health Emergency
Next Up: Editor's Pick