Congresswomen Targeted by Trump’s Racist Tweets: ‘This Is the Agenda of White Nationalists’

By Alana Abramson and Josiah Bates

The four freshmen Congresswomen who President Donald Trump attacked on Twitter issued a scathing joint rebuke Monday, calling his remarks “hateful,” “the agenda of white nationalists” and “a distraction.”

Reps. Alexandria Ocasio-Cortez, Ilhan Omar, Ayanna Pressley and Rashida Tlaib delivered their response Monday evening on Capitol Hill, right before they headed to the floor for votes. All four members had responded to the President on Twitter, but had remained largely silent on Monday, declining to speak publicly in the halls of Capitol Hill until their joint presser.

“This is a president who has openly violated the very values our country aspires to uphold. This is the agenda of white nationalists,” Omar said. “He would love nothing more than to divide our country based on race, religion, gender orientation or immigration status.”

Omar also pointed out how those remarks hit close to home for many minority communities.

“When he said go back to where you came from there was an uproar through all of our communities because every single person who’s brown or black at some point in their life in this country heard that,” Omar said. “When he made the comment I know that every single Muslim who has lived in this country and across the world has heard that comment.”

The Democratic Congresswomen said Trump’s attacks distracted from bigger, more important issues, including the conditions of migrants being held in federal custody.

“Weak minds and leaders challenge loyalty to our country in order to avoid challenging and debating the policy,” Ocasio-Cortez said. “This president does not know how to make the argument that Americans do not deserve health care. He does not know how to defend his policies, so he’s attacking us personally.”

Tlaib added: “I represent the third poorest district in the country, one that is made up of working people, who continue to be targeted and harmed by the actions and rhetoric of this administration.”

The public response––the first time the four had jointly addressed the matter––represents the latest escalation in the growing feud between the President of the United States and the liberal lawmakers. It began on Twitter, but quickly spilled over into the halls of the White House and Capitol Hill, raising questions about the President’s racist proclivities.

The members of Congress said they had received support following the President’s attacks, with Pressley saying even critics approached her at the airport to say, “‘I disagree with some of your policies… but I think what he did was wrong and he won’t apologize so I am going to apologize.”

The four did not respond directly to Trump’s claims about their criticism of the U.S. When asked about Trump’s false statement that Omar praised al-Qaeda, the Minnesota Congresswoman replied, “I won’t dignify that with an answer.”

Omar said it was “complete hypocrisy” for Trump to the Congresswoman to leave the country for criticizing the U.S.

“When this President ran and until today, he talked about everything that was wrong in this country and how he’s going to make it great,” she said.

She added that her criticism of American government was rooted in a desire to make the country better. “Every single statement that we make is from a place of extreme love for every single person in this country,” Omar said.

On Sunday morning, Trump attempted to capitalize on a growing rift between this quartet of progressives––who have dubbed themselves “The Squad”––and House leadership. In a series of tweets, he claimed that House Speaker Nancy Pelosi would help arrange for them to “go back” to their countries of origin. (All are U.S. citizens, which is a requirement to serve in Congress. With the exception of Omar, all were born in the United States.)

Trump did not specify who he was talking about, but Democrats interpreted the tweets as a reference to the four Congresswomen. Outraged, the entire caucus quickly put aside differences to rally around their colleagues, with top Democrats calling the tweets “xenophobic and racist.” On Monday, Pelosi announced that Democrats would introduce a resolution condemning the tweets, and urged Republicans, who have largely remained silent on the issue, to join them. “The House cannot allow the President’s characterization of immigrants to our country to stand,” she wrote in a letter to her colleagues Monday.

The four Congresswomen did not mention the resolution, but Tlaib and Omar did call on Congress to pursue impeachment proceedings. All four have previously supported impeachment.

The President appeared emboldened by the swift condemnation. He continued to issue similar tweets throughout Monday morning, and doubled down on his sentiments later in the day. “A lot of people love it but if you are not happy in the U.S. if you are complaining all of the time very simply you can leave,” he said Monday at a separate event. “You can leave right now.. he Come back if you want, don’t come back, that’s OK, too.”

Trump defended his tweets while speaking in front of the White House on Monday, saying “As far as I am concerned if you hate our country, if you’re not happy here, you can leave. That is what I say all the time.”

When asked if he was concerned about his tweets being seen as racists, Trump replied, “It doesn’t concern me because many people agree with me.”

Five minutes before the four women were to start their press conference, he tweeted again, doubling down on attacks he had made earlier in the day: “We will never be a Socialist or Communist Country. IF YOU ARE NOT HAPPY HERE, YOU CAN LEAVE! It is your choice, and your choice alone. This is about love for America. Certain people HATE our Country….”

Write to Alana Abramson at Alana.Abramson@time.com and Josiah Bates at josiah.bates@time.com. 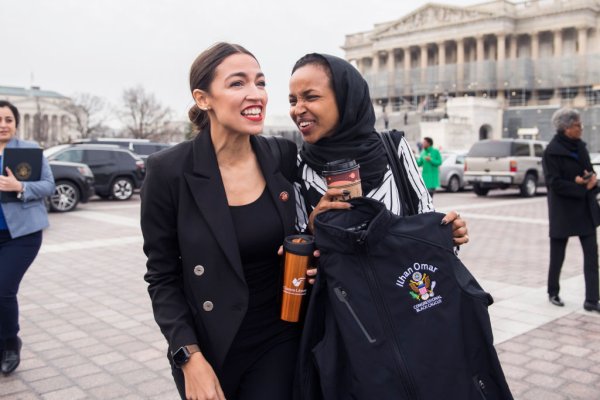 Trump's Gift of Unity for Dems
Next Up: Editor's Pick