From Banks' Cathartic 'Godless' to Ed Sheeran and Stormzy's Collaboration, These Are the 5 Songs You Need to Listen to This Weekend

“Take Me Back to London,” Ed Sheeran feat. Stormzy

Ed Sheeran’s new No. 6 Collaborations Project is a star-studded tour of some of music’s biggest names: there’s Camila Cabello and Cardi B on likely hit “South of the Border,” a Travis Scott duet, a collaboration with Eminem and 50 Cent on the same track. Wisely, Sheeran chooses to take something of a backseat to his guests, providing the platform while letting them shine. That’s particularly true on “Take Me Back to London” with British grime star Stormzy, who recently headlined the U.K.’s biggest festival, Glastonbury. The trap beat gets Sheeran’s melodic touch, with Stormzy jumping in from the start to boost the energy with his signature vibrancy. Sheeran is best known for his crooning style, but when he comes in later he proves he also has a rap edge: “I wanna try new things, they just want me to sing / Because nobody thinks I write rhymes,” he complains. Both artists are currently riding high on major successes, and they take this song as a chance to flex.

On her new album III, R&B experimentalist BANKS perfects her edgy, affecting style. “Godless” is both heavy and uplifting, a prayer and a plea. “I couldn’t save you, but at least I say I tried,” she sighs, and then the song picks up into a dark and pulsing beat. BANKS has said that “Godless” was a collaboration with an ex — something he wrote and she finished. Appropriately, then, it feels angry but cathartic, scattered with syncopated percussion and surprising shouts, forming up into a wall of sound. “The more experiences you have and the more pain you’ve gone through, the wiser you become,” she recently told TIME. “Life is messy. I write about the messiness.”

With sing-song lightness in a plinking schoolyard melody, “1%” is one of those deceptively catchy tunes that seems simple but gets directly under your skin. British singer-songwriter Scheller grounds things with his pleasantly low, almost morose delivery. The problem: someone is taking too long to text back — and his phone is about to die. “Three dots, well, they can mean anything,” he complains, referencing the “typing” icon that appears on a cell phone. “Say it cause I’m only on 1%.” Scheller brought it in fellow Brit and pop favorite Lily Allen for the duet, singing the other side of the story with her signature light, airy vocals. The combination is alchemical.

R&B singer Gallant has been following up his Grammy-nominated 2016 debut Ology with an impressive string of releases. “Crimes,” the latest, shows off his soulful falsetto over a subtle piano melody. He may be upset with a lover’s inconsistencies — “You keep telling me what’s yours is mine, but you lie” — but his delivery is so slick, and the song so intimate and catchy, that it plays more like a come-on than a kiss-off.

Sink into Bon Iver’s sonic textures once more with “Faith,” one of two new songs from the indie folk band’s upcoming fourth album, i,i. Frontman Justin Vernon has described the new project — out Aug. 30 — as an autumn album. In that vein, “Faith” suggests a kind of coziness, dappled with layers of light and a medley of instruments and voices. It haunts and welcomes: a good portent of the season to come. 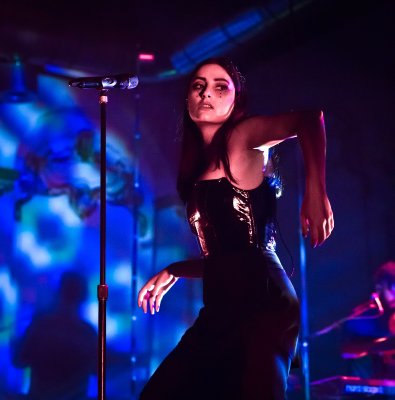 Banks on Discovering A New Voice for Her Album 'III'
Next Up: Editor's Pick