It’s a good day to be on the U.S. women’s national soccer team: the champion squad took home the 2019 World Cup trophy on Sunday, besting the Netherlands in a history-making 2-0 game. And it’s a good day to be team co-captain Alex Morgan, who had her standpoint moment in the tournament scoring a goal in the semifinal against England last week. So it should come as no surprise that Morgan celebrated in style following the big win, leveling up from her on-field tea-sipping fun of the semi.

Video footage of the jubilant post-game spirit shows Morgan and her teammates having an appropriately celebratory champagne-fueled moment in the locker room after the match ended. (This seems particularly apt, given that the game was in France, home of champagne, after all.) In one clip on Instagram, teammate Ashlyn Harris serves up some frothy bubbles to Morgan as they ham it up for the camera. “Eat your heart out,” Harris captioned the video: “Drip drip.” In other videos, also on Harris’s Instagram Stories, Morgan can be spotted dancing away. (Later, fans recorded fellow co-captain and goal-scorer Megan Rapinoe dousing the patrons of a bar in sparkling wine, as well.)

Following political controversy and an equal pay legal case, looks like the women of Team USA are taking some much-deserved time to revel in their success. And now Morgan and her teammates are enjoying their new hardware, as the team’s Twitter account shared on Monday as they prepared to return to the U.S. 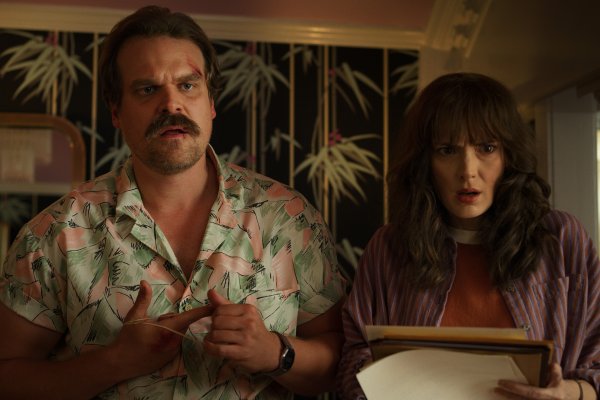 The Internet Is Head Over Heels for a True Hero of Stranger Things Season 3
Next Up: Editor's Pick