Here's Where to See the U.S. Women's Soccer Team Stars Play Now That the World Cup Is Over

With the U.S. women’s team’s decisive 2-0 win against the Netherlands in the finals of the 2019 FIFA Women’s World Cup on Sunday, the famed tournament has ended.

And while the entire world might move on from Alex Morgan’s goal-scoring celebrations, there will still be plenty of great soccer to watch in America, and many more chances to see your favorite stars compete.

As they return home, here’s where to see some of the star players on the U.S. women’s national soccer team now that the World Cup is over.

Alex Morgan of the U.S. team going up the ceremony platform during the 2019 FIFA Women's World Cup France Final match between The United States of America and The Netherlands at Stade de Lyon on July 7, 2019 in Lyon, France.
Daniela Porcelli—Getty Images

USWNT co-captain Alex Morgan scored a goal to break an early tie in the World Cup semifinal match against England on Tuesday, but it was hard to tell if it was the goal itself, or her tea-drinking celebration that stole the show. Now Morgan will be returning to the National Women’s Soccer League (NWSL) where the California native plays with the Orlando Pride, based in Orlando, Fla.

Co-captain Megan Rapinoe has made waves both on the field and off. In the finals match on Sunday, Rapinoe made the first goal of the game, breaking a long 0-0 stalemate, while in a recent viral video interview, the midfielder said she wouldn’t visit the White House if her team wins the FIFA World Cup. Back home, Rapinoe plays for the NWSL’s Reign FC, based in Tacoma, Wash.

Tobin Heath of the U.S. team celebrates after the Final match on July 7, 2019 in Lyon, France.
Molly Darlington—AMA/Getty Images

Tobin Heath was a star player on the 2019 USWNT. When she’s not on the world stage, she plays for the Portland Thorns FC, based in Portland, Ore.

Sauerbrunn was named NWSL Defender of the Year from 2013-2015, becoming the first player in the league to win the award three years in a row. The St. Louis native plays for the Utah Royals FC, based in Sandy, Utah.

Julie Ertz of the U.S. team looks on after the victory during the 2019 FIFA Women's World Cup France Final match on July 7, 2019 in Lyon, France.
David Aliaga—MB Media/Getty Images

Julie Ertz, another star midfielder on the USWNT, plays for Chicago’s NWSL’s team, the Red Stars.

Midfielder Rose Lavelle, scored the last goal of the FIFA Women’s World Cup, bringing the U.S. to its 2-0 victory. Back home, she plays for Washington Spirit, based in Germantown, Md.

The next big tournament

For those eager for more top-level women’s soccer, the NWSL’s season continues though the fall, culminating in a matchup of four teams in the NWSL playoffs in October. The final two teams will compete in the NWSL Championship in Cary, N.C., on Oct. 27. 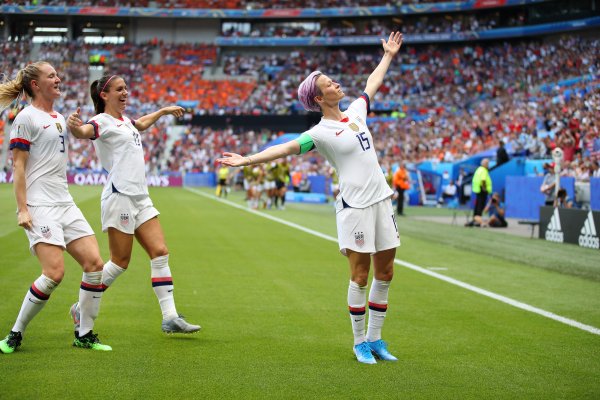 Team USA Sets a New Standard for Excellence
Next Up: Editor's Pick