Evangelicals Are Supporting Trump Out of Fear, Not Faith

Then-candidate Trump at a 2016 service at the International Church of Las Vegas.
Evan Vucci—AP
Ideas
By David French
French is a senior editor at The Dispatch and a columnist for Time. His new book is Divided We Fall: America's Secession Threat and How to Restore Our Nation. He is a former major in the United States Army Reserve.

On June 21, the writer E. Jean Carroll came forward with a vivid and disturbing claim that Donald Trump raped her in a department store in the 1990s. She is the 22nd woman to allege that Trump committed acts of sexual misconduct. These claims are more extensive and more corroborated than the accusations against Bill Clinton.

It’s worth contrasting Trump, who denied Carroll’s claim (as well as his other accusers’), with Clinton because his scandals helped spur the Southern Baptist Convention in 1998 to issue its seminal “Resolution on Moral Character of Public Officials.” That document’s key statement was ominous and unequivocal: “Tolerance of serious wrong by leaders sears the conscience of the culture, spawns unrestrained immorality and lawlessness in the society, and surely results in God’s judgment.”

The relentless drumbeat of claims against Trump–combined with the clear moral declarations of the past–have caused millions of Americans to look at their evangelical fellow citizens and ask, simply: Why? Why have you abandoned your previous commitment to political character to embrace Donald Trump?

Part of the explanation is undeniably basic partisanship and ambition. White evangelicals are largely Republican, and they’re generally going to vote for Republicans. And proximity to power has always had its attractions for religious charlatans of all stripes. But I’d suggest the real reason for the breadth and depth of evangelical support is deeper and–perversely–even more destructive to its religious witness.

That reason is fear.

Talk to engaged evangelicals, and fear is all too often a dominant theme of their political life. The church is under siege from a hostile culture. Religious institutions are under legal attack from progressives. The left wants nuns to facilitate access to abortifacients and contraceptives, it wants Christian adoption agencies to compromise their conscience or close, and it even casts into doubt the tax exemptions of religious education institutions if they adhere to traditional Christian sexual ethics.

Instead, the evangelical church is called to be a source of light in a darkening world. It is not given the luxury of fear-based decisionmaking. Indeed, of all the groups in American life who believe they have the least to fear from American politics, Christians should top the list. The faithful should reject fear.

This is made plain to young Christians from the early days of Sunday school. There, many millions of young believers are taught the biblical verse: “For God gave us not a spirit of fear but of power and love and self-control.”

But in 2016, something snapped. I saw Christian men and women whom I’ve known and respected for years respond with raw fear at the very idea of a Hillary Clinton presidency. They believed she was going to place the church in mortal danger. The Christian writer Eric Metaxas wrote that if Hillary won, America’s chance to have a “Supreme Court that values the Constitution” will be “gone.” “Not for four years, not for eight,” he said, “but forever.”

That wasn’t faith speaking. They were the words of fearful men grasping at fading influence by clinging to a man whose daily life mocks the very values that Christians seek to advance.

But why? The American evangelical church isn’t so weak that it needs Trump’s version of secular salvation. The early persecuted church would be stunned at the modern American church’s immense political strength. It has become so strong that it exercises veto power over the political prospects of any Republican nominee.

Yet the church is acting as if it needs Trump to protect it. That’s not courageous. It’s repulsive. And so long as this fear continues, expect the church’s witness to degrade further. In seeking protection from its perceived enemies, the church has lost its way.

It’s time for evangelicals to exercise their political veto power. America’s conservative people of faith should seek a primary challenger to Trump and send a message to the GOP that it will not compromise any longer. And it should do so from a position of confidence–and faith. 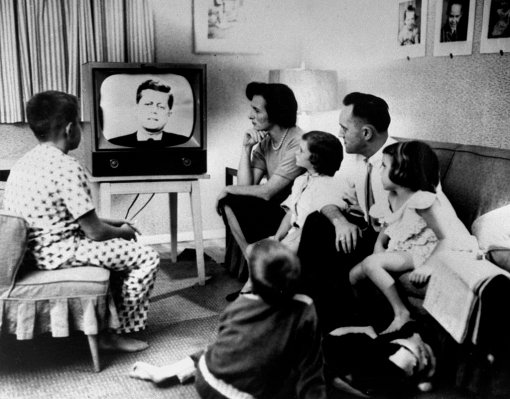 The Most Important Presidential Debates in American History, According to Historians
Next Up: Editor's Pick