Hillary Clinton: Anyone Else Would Have Been Indicted After Mueller Report

Hillary Rodham Clinton says she agrees with those who argue that Russian meddling cost her the 2016 election and that President Donald Trump has obstructed justice in covering up his campaign’s interactions with a foreign adversary.

Speaking to the TIME 100 Summit in New York on Tuesday, the former Secretary of State, Senator and First Lady bluntly criticized Russian efforts to interfere with her presidential bid, noting that Russia had hacked every Florida county’s elections system and had stolen not just top Democrats’ emails but also their strategy. Then, she said, it has become clear that the only reason Trump has not been indicted is because of the office he currently holds.

“Any other person who had engaged in those acts would certainly have been indicted, but because of the rule in the Justice Department that you can’t indict a sitting President, the whole matter of obstruction was very directly sent to the Congress,” Clinton said.

Clinton, however, has little faith in Congress acting. While praising House Speaker Nancy Pelosi’s deliberate use of oversight investigations to probe beyond what Special Counsel Robert Mueller included in his report, Clinton had harsh words for what she called “the do-nothing Senate.”

“That has become a hotbed of cynicism unlike anything I have ever seen, and I served there for eight years and I know some of these people and they know better,” she said.

“What you’re saying is we were attacked, we have significant evidence that this Administration did everything it could to undermine and interfere with the investigation into that act. And we are going to walk away and pretend it didn’t happen?” Clinton said. “Well, at that point, then you might as well just say all bets are off, there is no accountability for anyone in the most significant job in the world. I don’t think that’s the right place to end up.”

Clinton said too much is at stake to fast-forward through the report.

“This is about what is going on today and the threats to our next election, to our defense as a nation,” Clinton said. “I’m really of the mind that the Mueller report is part of the beginning. It’s not the end. … There’s still so much more that we should know and that we should act upon.” 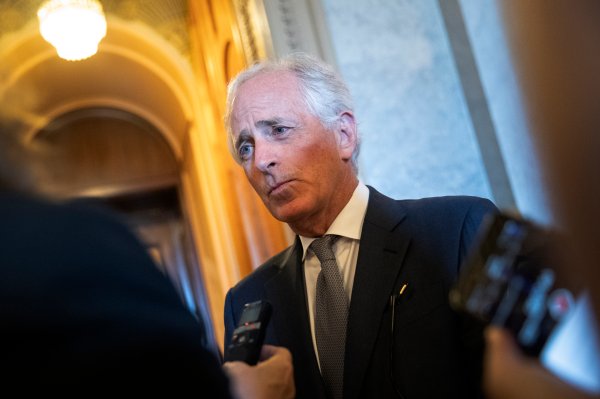 Corker: GOP Challenger to Trump in 2020 Would Be Good for America
Next Up: Editor's Pick