Did Cory Booker Flash Beto O'Rourke Side-Eye After He Started Speaking Spanish at the Debate?

An early breakout moment from Wednesday’s 2020 Democratic presidential debate didn’t come from a candidate’s answer, but from a facial expression.

When Beto O’Rourke, the former Congressman from Texas, responded to his first question in Spanish, Sen. Cory Booker hit O’Rourke with what looked like some serious side-eye that quickly ignited the internet.

Twitter was so abuzz with commentary on Booker’s apparent reaction to O’Rourke that Queer Eye‘s Jonathan Van Ness even got in on the action.

Some viewers of the debate took to Twitter to argue that Booker, who speaks Spanish himself, may have been a bit “jealous” of the opportunity to speak Spanish first on the debate stage. (Booker has previously conducted Spanish interviews with Univision.)

Indeed, the New Jersey senator later briefly spoke Spanish as well during the debate — although not everyone on the Twitter was impressed.

Whatever his thought process may have been, Booker’s face immediately inspired myriad memes and jokes.

Even fellow 2020 Democratic candidates Marianne Williamson and Andrew Yang got in on the social media attention paid to the Spanish spoken at the event, jokingly noting that they better brush up on the language before they hit the debate stage Thursday night. 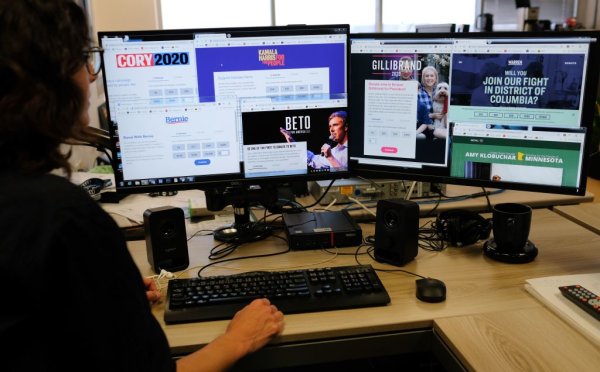 None of the 2020 Websites Are Fully Accessible to Disabled Voters
Next Up: Editor's Pick