The Most Important Presidential Debates in American History, According to Historians

It is, once again, debate time in America. On June 26 and 27, the 20 top Democratic candidates will come together for the first time to discuss the leading questions of the day. It will be just the first step in what’s sure to be a year full of such meetings, first between primary contenders like those who will face off this week and then between candidates for the White House.

Presidential debates can be pivotal for the tide of an election. Candidates stand beside their opponents in front of some of the biggest audiences of their campaigns; some 84 million people viewed the first Trump-Clinton presidential debate in the lead-up to the 2016 election. Mitchell McKinney, professor of communications at the University of Missouri, tells TIME that the debates can offer candidates an unparalleled opportunity to present their stances on issues, to convey their likability, and to tell a story about themselves — and about the future of the United States. At the same time, presidential debates also provide a colossal opportunity for candidates to mess up.

“There’s typically no other time when that size of an audience is tuned in, listening, to these candidates,” McKinney says. “That is the opportunity to really connect with a large audience of voters with a positive message that might make a difference. That’s why, when the question comes up [whether] these debates matter, it certainly can.”

But some matter more than others. TIME spoke to several historians about the most important presidential debates and their impacts on the course of American history.

The first debate between Kennedy and Nixon may be the most important presidential debate of all time, says William Benoit, professor of communications at the University of Alabama at Birmingham. Not only was the event the first nationally televised presidential debate in history, but both Kennedy — then a Senator from Massachusetts — and then-Vice President Nixon later became Presidents.

Despite the debate’s notoriety, however, one story you probably think you know about it is “false,” Benoit says.

In the last 60 years, the best-known narrative about the debate is that Nixon ultimately lost the election because he looked old and tired during the debate, while Kennedy, who wore makeup, appeared to be young and vibrant. As the story goes, people who watched the debate on television believed that Kennedy had won the debate, but those who listened to their speeches on the radio believed that Nixon had performed better. According to Benoit, this explanation doesn’t hold up because a very different demographic listened to the debate on the radio. For example, a higher proportion of the radio-listeners were farmers, who listened to the debate on their tractors. There are too many factors in play to say that the TV-radio divide came down to mere cosmetics.

“The people who listened on the radio had different knowledge, different attitudes, and did not reflect the television audience,” Benoit says.

But that doesn’t meant it didn’t matter. The debate’s biggest effect on public opinion was that it allowed Americans to see — or hear — the two candidates together, Benoit says.

“Kennedy was a Senator, and, you know, he was a war hero. But Nixon had been in the White House. So a lot of people thought Kennedy was inexperienced. But once they showed up on the stage together, people thought, hey, these people are equals,” says Benoit. “It’s not an elder statesman and some young pup. It gives them the same standing.”

Nevertheless, the idea that Nixon’s looks killed his candidacy entrenched the idea that appearances are an important part of debates, says Julian Zelizer, a professor of history and public affairs at Princeton University.

“That sets the standard and creates the idea that debates are not simply about the substance, but also the presentation,” Zelizer says.

After the the Nixon-Kennedy election, a long period passed without any general election debates. That changed when President Ford fell behind during the 1976 campaign, and decided that he needed to debate Georgia Governor Jimmy Carter, Benoit says.

“That debate was very important for cementing the presumption there will be debates every year,” Benoit explains.

The pair faced each other for a total of three debates, but the debates are best remembered for a single moment during the second debate. President Ford declared that “There is no Soviet domination of Eastern Europe, and there never will be under a Ford administration.” At the time, even the moderator, Max Frankel of the New York Times, was unable to hold back his surprise: “I’m sorry, what? … did I understand you to say, sir, that the Russians are not using Eastern Europe as their own sphere of influence in occupying most of the countries there and making sure with their troops that it’s a communist zone…”

Zelizer argues that the moment shows how vulnerable candidates can be during a televised debate.

“Saying things the wrong way and not being clear in front of the cameras can be a total political disaster,” Zelizer says.

It’s uncertain whether the gaffe ultimately shifted the outcome of the election, which Carter won. Other scholars have suggested that there isn’t polling evidence that the debate hurt Ford’s campaign. However, the moment certainly made Ford, who had a reputation for clumsiness, look uninformed.

President Jimmy Carter and his Republican challenger, Ronald Reagan, shake hands as they greet one another before their debate on the stage of the Music Hall in Cleveland, Ohio.
Bettmann—Bettmann Archive

Although Carter was the lesser-known candidate in 1976, he played the opposite role in the 1980 election, says McKinney.

“We think of Ronald Reagan as a noted great President. Well, at the time, he had been the governor of California. He needed the exposure. He got a single debate against Jimmy Carter; he did a magnificent job in that debate,” McKinney says.

The pair faced off a single debate. While Carter peppered his rhetoric with facts and policy, Reagan countered with one-line catchphrases, including “Are you better off than you were four years ago?” and “There you go again.”

Reagan won, in part, because he understood a fundamental of the debates. While Carter came off as “humorless,” Reagan charmed the audience.

“The candidates must keep in mind that these are televised campaign debates. They are not a college debating society effort, in terms of who will win — not necessarily who has the most evidence, who cite can the most statistics,” McKinney explains. Instead, a candidate should “present a compelling narrative to the American people in terms of who they are.”

Like other successful presidential candidates before him, Bill Clinton is believed to have won the 1992 debates — and the election — in part because he came off as more likable than his opponent over the course of three debates. In one famous moment during the second debate, Bush was caught on camera looking at his watch.

“The visual is so important, and that defines who a person is,” Zelizer says.

McKinney argues that these debates were especially important because they introduced the public not only to the Arkansas Governor Clinton, but also to a third-party candidate, businessman Ross Perot, who was eventually able to garner 18.9% of the vote. Exit polls suggested that Perot took votes from Clinton and Bush about equally, although some experts still disagree; Mary Matalin, Bush’s former campaign director, later said that she was “absolutely convinced” that Perot cost Bush the election.

“He got us off message. Every event that we found ourselves in — particularly the debates with him — caused President Bush to underperform,” Matalin said.

In races that are as tight as the 2000 election, debates may be particularly important. During that year’s three debates, Vice President Gore appears to have “lost ground” to Texas Governor Bush in the aftermath of the debates. Bush came off as the more relatable candidate, while Gore rattled off facts, McKinney argues.

“We had a rather highly intellectual Al Gore paired opposite of the George W. Bush sort of homespun guy from Texas. And it just didn’t play well over the series of those debates,” McKinney says.

As TIME wrote in 2000, “Last week, George W. Bush and Al Gore stood at podiums, and Gore, as befitting the furniture, gave what came across as a lecture: correcting his opponent, holding forth, sighing in exasperation at Bush’s answers. The pundits and the polls agreed: Gore had won the debate. Then he lost: within a week, Bush had opened up a lead in several polls, as voters apparently decided they were tired of Professor Know-It-All.” 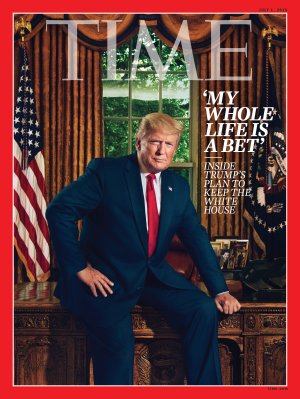 The Story Behind President Donald Trump's 29th TIME Cover
Next Up: Editor's Pick