Jake Gyllenhaal is supposed to play the villainous Mysterio in the forthcoming film, Spider-Man: Far From Home. There’s just one problem—he’s in a bromance with Spiderman.

Gyllenhaal stopped by the The Tonight Show on Tuesday to chat with Jimmy Fallon about joining the Marvel Cinematic Universe as master of illusion Mysterio, but spent much of his time raving about Spider-Man himself, Tom Holland. As soon as Fallon asked, “How’s Tom Holland?” Gyllenhaal’s face lit up and he couldn’t stop swooning about his on-screen nemesis.

“He’s great, dude. He’s awesome,” gushed Gyllenhaal. “He’s the nicest guy in the world. I’m super into him as Spider-Man.” The glowing accolades only prove what everyone who follows Gyllenhaal on Instagram already know—it’s a bromance. Yep, could Gyllenhaal and Holland be joining the likes of Obama and Biden or perhaps Frank Ocean and Brad Pitt? Time will tell.

The two actors made their bromance Instagram official in a heart-filled post on Valentine’s Day. If it’s not bromance, why else would Gyllenhaal use the social media site’s cheesy Superzoom filter?

Don’t scoff, studies have shown that young men get more emotional satisfaction out of their “bromances” than they do out of romantic relationships with women. That undoubtedly holds true in the Marvel Universe as it does in our own.

Spider-Man: Far from Home, which is directed by Jon Watts, is set for release on July 5, 2019. 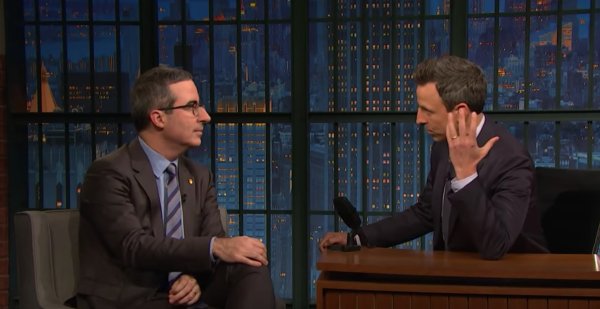 John Oliver Thinks It's Dangerous to Pay Attention to the 2020 Election Now
Next Up: Editor's Pick