Stephen Colbert has some questions about the Mueller Report. Mainly, he is questioning President Donald Trump’s quote in the report, released Thursday, which concludes this investigation into potential collusion between the Trump campaign and the Russian government during the 2016 presidential election.

“We now know how Trump felt about Mueller’s investigation,” Colbert explained during his late night show monologue. “When Jeff Sessions told Trump special counsel had been appointed, Trump slumped back in his chair and said ‘Oh my God. This is terrible. This is the end of my presidency. I’m f–ked.” It’s quite a quote — and Colbert had a hot take: “I’m guessing that’s not how an innocent person reacts,” he suggested.

“Why did Trump think it was terrible?” he went on. “Well, because according to Mueller, even though his report didn’t establish collusion with Russia, Trump was worried a thorough FBI investigation would uncover facts about the campaign that even Trump understood to be crimes… like in that movie I Know What I Did Last Summer,” he joked.

Colbert also tore into Attorney General William Barr, criticizing Barr’s choice to preempt the Report’s release by holding a press conference in which he seemed to act in defense of Trump.

“Now, if you’ve got nothing to hide, why do you have to set up the Report first?” Colbert questioned. He seemed to think — like many other political analysts — that Barr was acting more as a defense attorney for Trump than as an impartial attorney general. “Protect me Bill. They’ll eat me alive in jail. I’m 70% cheeseburger!” Colbert joked about a hypothetical conversation between Barr and Trump. 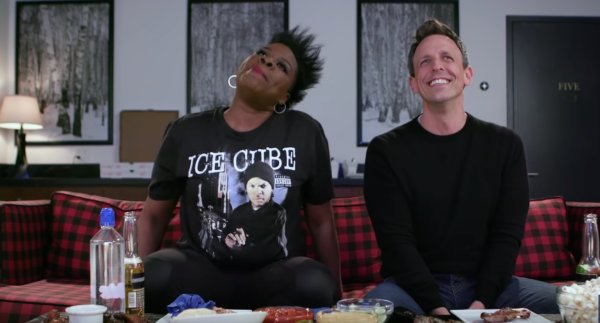 Leslie Jones Screaming at Game of Thrones With Seth Meyers Is the Watch Party to Be at Right Now
Next Up: Editor's Pick