The quarterback who upended the NFL without taking a snap 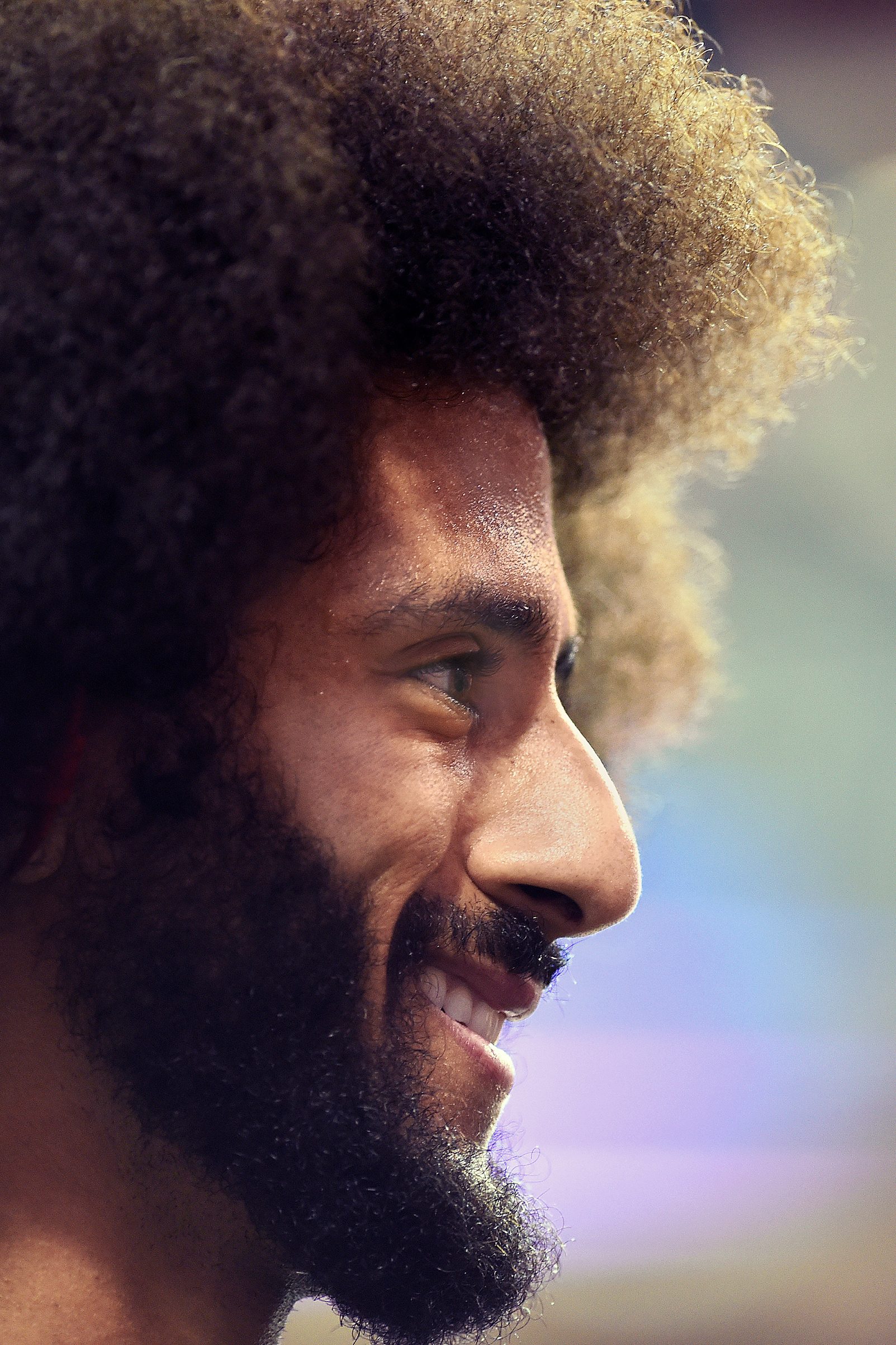 Colin Kaepernick last played in an NFL game on Jan. 1. But over the past 11 months, he’s exerted more influence on American society than any of the stars lighting up television screens on Sundays. A silent protest that began in 2016, when Kaepernick started kneeling during the national anthem to call attention to police brutality and racial injustice, grew into a social movement that highlighted the nation’s cultural divide, roiled powerful institutions from the NFL to the White House, and forced us all to grapple with difficult questions about protest, patriotism and free speech—issues many would rather ignore, let alone face as part of their weekend entertainment.

As the controversy mushroomed this year, Kaepernick declined to speak about his role, but paid a heavy price for taking on the most popular sport in the U.S. Despite boasting talent and credentials that surpass those of many of the journeymen quarterbacks signed this year, Kaepernick found himself out of work; front offices around the league decided they were better off without the distraction. In October, he filed a collusion grievance against the NFL, arguing that he had been blackballed by its owners. He’s set to become the first star athlete since the Vietnam era to lose his career because of his beliefs.

At the same time, he tested our own convictions. The resistance movement he sparked raised issues that split players and fans alike. What’s the truer measure of patriotism: standing at attention before a football game, or asking whether the country is living up to the lyrics of “The Star-Spangled Banner,” which salute the “land of the free and the home of the brave”? When critics lampoon the activism of multi­millionaire athletes, labeling them entitled and ungrateful, are they saying the money players earned through the sacrifice of time and body disqualifies them from free expression? And what does a clash between millions of white NFL fans and many of the African-American players who entertain them say about the state of race relations? How far have we really come?

Only a few months ago, the protests seemed destined to fade into a footnote. The NFL season opened with Kaepernick out of the league and just a small group of players demonstrating. Then, on Sept. 22, President Donald Trump grabbed the issue and ran with it like a tailback eyeing an end zone. “Wouldn’t you love to see one of these NFL owners, when somebody disrespects our flag, to say, ‘Get that son of a bitch off the field right now’?” he said at a political rally in Alabama.

The attack thrilled his white conservative base. But athletes were aghast. Basketball star LeBron James called Trump a “bum.” Angered by the President’s call to curtail their constitutional rights just weeks after defending the free speech of violent white nationalists in Charlottesville, Va., players responded with the largest demonstration of social activism in U.S. sports history. Nearly 200 players did not stand. Owners called Trump out as well, including the New England Patriots’ Bob Kraft, a longtime Trump friend.

The unity was short-lived. Dallas Cowboys owner Jerry Jones, who on Sept. 25 took a knee before the anthem with his players, was soon clamoring for a new rule requiring them to stand. Jones and some other billionaire owners felt that the protests were responsible for the NFL’s declining TV ratings. And Trump kept needling the league and its players, bragging that he had asked Vice President Mike Pence to leave an Oct. 8 Indianapolis Colts game after players there took a knee.

The owners met in October and chose not to require players to stand for the anthem. And the NFL endorsed legislation to reduce mandatory-minimum sentences for nonviolent drug offenders, a victory for the activist athletes. “What Kaepernick started really pushed these issues to the forefront,” says Philadelphia Eagles safety Malcolm Jenkins, who has lobbied state legislatures on prison reform.

But it was equally clear that many people agreed with Trump. According to an HBO/Marist poll, 47% of Americans thought athletes should be required to stand during the anthem; 51% believed no rule should exist. Many questioned why athletes needed to broadcast their message at a moment traditionally reserved for saluting the flag and the military that protects it. David McCraw, owner of the Palmetto Restaurant and Ale House in Greenville, S.C., stopped showing NFL games in September in his own protest, then says he watched business rise 20% the following month. A Savannah, Ga.–based company called Nine Line Apparel has sold more than 30,000 I Stand For Our National Anthem shirts since the protests began. “They will never understand what it’s like to lose a friend overseas, carry him back home with a flag draped over his casket, and hand that flag over to his child,” says CEO Tyler Merritt, an Army veteran. “They are acting out of ignorance.”

On the other side of the divide, Golden State Warriors coach Steve Kerr says Kaepernick and his fellow athletes should be considered patriots. Their goal, after all, is to build a better, more equitable nation. “Where’s your heart? Where’s your compassion?” asks Kerr. “Whatever side of the Kaepernick issue you’re on, if you’re helping your fellow man, that’s the most important thing.”

The activist athletes insist that they respect the military and say they chose the anthem to protest because discomfort draws eyeballs. “Colin’s trying to reach the far ends of this world,” says John Carlos, a former track-and-field star whose famed black-power salute at the 1968 Olympics prompted a similar backlash. “I could have gone to Central Park and did it, but it never would have received the acknowledgment and created the conversation.”

By his measure, Kaepernick’s protest has thrived. The artist Common, who in May spoke at Kaepernick’s “Know Your Rights” camp for kids—created to teach at-risk youth lessons on education, self-empowerment and engaging with police officers—spotted Kaepernick jerseys at his October concert in South Africa. “They were like, ‘Man, I don’t know how your country would think that talking about equality is wrong,’” he recalls. Jay-Z wore a Kaepernick jersey on the season premiere of Saturday Night Live. Young fans dressed as the quarterback for Halloween, while some older ones mocked him with racist costumes.

As Kaepernick continues to train, hoping for another shot at the game that first made him famous, others with no connection to the NFL have taken up his protest. Members of a high school cheerleading team in Michigan knelt during the anthem before a game. Gyree Durante, who played quarterback for Albright College in Reading, Pa., defied a team decision to stand. He was booted off the team but says he has no regrets. “Kaepernick showed me, and others around the country, to fight for what you believe in,” says Durante. “Don’t back down.” Chuck Warpehoski joined three other members of the Ann Arbor, Mich., city council in kneeling during the Pledge of Allegiance at the start of a meeting. “Most of the people who took the time to call me,” he recalls, “were there to tell me to burn in hell.”

Kaepernick, meanwhile, has floated above the fray. But he’s close to fulfilling a pledge to donate $1 million to community organizations and charities. Muhibb Dyer, co-founder of the I Will Not Die Young campaign in Milwaukee, used part of his $25,000 donation from Kaepernick to buy a casket he uses as a warning prop while addressing high school students. “Colin should be celebrated,” says Dyer. “His protest has never been about the flag. Human beings are losing their lives. That’s the point of it all.”

Representative John Lewis, who helped lead the 1965 Alabama march from Selma to Montgomery that devolved into the “Bloody Sunday” beatings of nonviolent protesters, likens Kaepernick’s leadership to that of civil rights icons like himself. “There are individuals who come along from time to time, they have what I call an executive session with themselves,” says Lewis. “He has a sense that this is the right thing to do, right now. For some, it’s almost a calling.”

Kaepernick is an imperfect figurehead for a movement designed to raise social consciousness. He’s worn socks depicting police officers as pigs and refused to vote in the 2016 presidential election. But he isn’t trying to win a popularity contest. After all, he took a stance that cost him his career. “He’s the Muhammad Ali of this generation,” says Harry Edwards, a University of California, Berkeley, sociologist who organized the 1968 Olympic protest and has advised Kaepernick. “I’m not worried about Colin. I’m more worried about the rest of us.”

—With reporting by Alana Abramson/New York